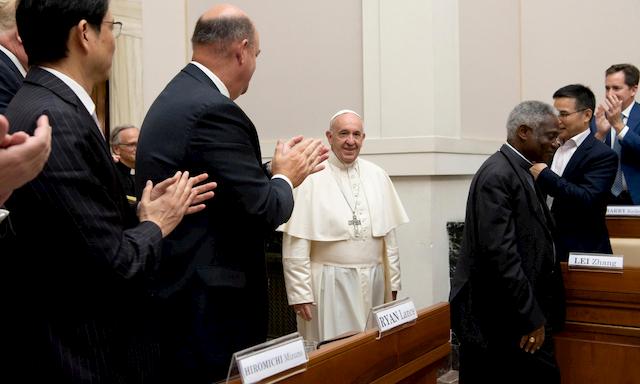 After the UK and Ireland, this time Pope Francis has declared a global “climate emergency,” reminding of the dangers of global heating. According to him if we fail to act urgently to reduce greenhouse gases that would be “a brutal act of injustice toward the poor and future generations.”

Endorsing a threshold limit of 1.5C limit on temperature rises, which is currently aimed by some countries, he referred to the warnings from the Intergovernmental Panel on Climate Change of “catastrophic” effects of warming beyond that limit. He also urged businesses and young people to assume a leading role. According to him, it would require “radical energy transition” to stay within the 1.5C limit.

“Future generations stand to inherit a greatly spoiled world. Our children and grandchildren should not have to pay the cost of our generation’s irresponsibility,” he said, in his most substantial and most direct intervention on the climate crisis as of now. “Indeed, as is becoming increasingly clear, young people are calling for a change.”

Friday in the Vatican he met the leaders of some of the world’s biggest multinational oil companies and through his impassioned plea, he impressed upon them the urgency and level of the challenge, and emphasized their central role to handle the emissions crisis. Compared to a similar meeting last year, the Pope’s stance was tougher this time giving clear warning that time was flying and urged them to listen to “the increasingly desperate cries of the earth and its poor.”

The response received from the chief executives or chairs of BP, ConocoPhillips, Chevron, ExxonMobil, Shell, Total, and several other significant investors including BlackRock and Hermes, was encouraging as they called on governments to introduce carbon pricing for encouraging low-carbon innovation, and to emphasize on greater financial transparency to aid investors.

However, no pledges were made by them to reduce their greenhouse gas emissions, and no timetable was set for action.

The two-day meeting in the Vatican, which was addressed by the Pope and led by senior Vatican churchmen ended with two concluding statements, and the signatories called for a “combination of policies and carbon pricing mechanisms … designed in a way that simultaneously delivers innovation and investment in low-carbon solutions while assisting those least able to pay”.

According to Mel Evans, climate campaigner for Greenpeace UK, the oil companies’ pledges did not go far enough. “The oil majors knew all about the risk from climate change many years before most of us first heard about it. They knew where we were heading, they knew their products were the cause, and yet they kept it quiet and lobbied for business as usual,” said Evans. “And they’re still lobbying for business as usual. When it comes to saving the planet they will do what they are forced to do, and no more, which is why we’re having to block them from drilling new oil wells as we speak. Expecting leadership from them is a path to certain disaster.”

The rise in emissions are at their fastest level in close to a decade, BP said this week, and the period left to prevent dangerous global heating levels is ever shorter. The high emissions in every year take the world closer to the brink, as it adds to the atmosphere’s stock of carbon dioxide, which may take even a century to disappear. Since the beginning of the continuous records before 60 years and more, the concentration of carbon dioxide in the atmosphere was at the second highest annual increase last month.

An injunction was served by BP on the Greenpeace ship Arctic Sunrise on Friday was to prevent it joining the activists occupying the rig of the oil company in Cromarty, Scotland. Greenpeace wants to bring out the dangers of new oil drilling and says it will severely affect the climate emergency.

In previous speeches, the Pope has slammed “the continued search for new fossil fuel reserves” and said, “fossil fuels should remain underground.”

Bob Dudley, chief executive of BP, said after the Vatican meeting: “The world needs to take urgent action to get us on a more sustainable path and it is critical that everyone plays their part – companies and investors, governments and individuals. This requires all of us to come together, build understanding and collaborate to find solutions. Constructive dialogues such as this meeting are essential in aligning key players on the steps needed to accelerate the energy transition while still enabling advances in human prosperity. I am grateful to his Holiness for continuing to support this critical engagement.”

This week the chief economist of BP warned that in case of investing in vital clean technologies like carbon capture and storage, the world “should not rely on the generosity of the private sector” and instead called for the government to utilize taxpayers’ money for funding such initiatives.

Last year BP’s profits doubled to a five-year high with its soared output of oil and gas.

Mark Campanale, founder and executive director of the Carbon Tracker, said: “We must forego business-as-usual protocols and short-term market-driven goals or face environmental and financial ruin of catastrophic proportions. Oil and gas companies have a crucial role to play in transitioning to a low-carbon economy but must today collectively take those hard decisions in the wake of determined investor and public pressure, and unambiguous scientific evidence.”

As per the IPCC warning last year, the world had about a decade to control emissions of greenhouse gases, or else a probable rise in temperatures well beyond the 1.5C above pre-industrial levels would bring devastating effects such as heatwaves, droughts, floods, and damage to agriculture.