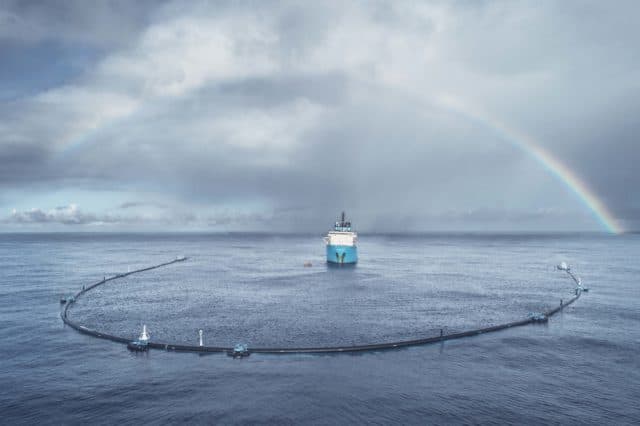 The Great Pacific Garbage Patch (GPGP) is an important issue in the case of ocean pollution. The clean-up system deployed to the Great Pacific Garbage Patch, the largest of ocean garbage patches with the objective of collecting plastic is facing problem just after its launch a few months back and it needs some alteration. There is a passive floating system to catch plastic that it is catching, but the problem is that plastic is escaping.

It is Boyan Slat, a Dutch inventor and the founder and CEO of The Ocean Cleanup who develops advanced systems to tackle this garbage patches of the ocean. The system, Dubbed 001 or Wilson, consists of a U-shaped floater which is 600 meters long and a tapered skirt, 3 meters deep attached below.

The floater sits at the water surface like an artificial floating coastline and gives buoyancy to the system. While the floater stops plastic from flowing over it, the skirt stops debris from going underneath.

The systems developed by Ocean Cleanup estimated to take just five years to remove ½ of the Great Pacific Garbage Patch, and that too at a fraction of the cost.

The observation within the four weeks’ time since the deployment of system 001 in GPGP is that even after collection of plastic by the system, plastic is going out of the system. As per the post of the Slat on the group’s website in the November last, they are looking for the remedy and working on the reasons and solutions. As 001 is the first deployed ocean cleanup system based on the beta system, they are ready for surprises.

Slat also said that they are confident to make it work soon. They plan to tune the system by not just collecting the plastic but retaining the plastic caught. As discussed by Slat on site, below are the initial observations, cause and effects and solution.

At the beginning of October, the system’s Pacific Trials 350 nautical miles from land completed successfully and general behavior and seaworthiness of the system got confirmed. The initial observations of the crew are:

The Ocean Cleanup team is looking for the solution in their first attempt to remove these causes.

So there is no time to waste. The Ocean Cleanup team is busy in implementing the first solution, and that is the extension of the closing line. Their team will continue to analyze the data and test alternative solutions to make the system fully operational.