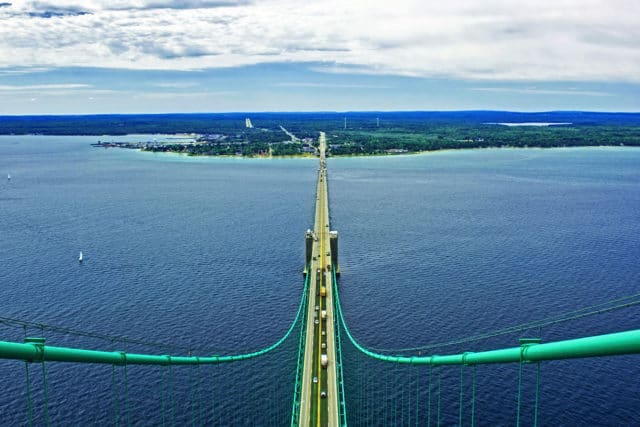 At last the controversial proposal to dig a tunnel and run an oil pipeline under the Great Lakes crossed the hurdle as reported by Crain’s Detroit. The objective is to replace the old twin oil and natural gas pipelines lain along the bed of the lake since 1953.

The twin pipes are part of Line 5 pipelines of Enbridge carrying crude oil and natural gas liquids used in propane from Wisconsin, Superior to refineries on Ontario, Sarnia. A new segment of the pipeline will get extended through the tunnel replacing the twin pipes.
The outgoing Gov. Rick Snyder of Michigan signed legislation and formed the Mackinac Straits Corridor Authority to administer the oil tunnel that proposed in the Straits of Mackinac to allow the Canadian oil to flow through the Great Lakes.

The three members of Mackinac Straits Corridor Authority in their first meeting at St. Ignace unanimously backed the deal and approved it between the state of Michigan and Enbridge, a Canadian pipeline company.

As per the deal, they will drill a tunnel into the bedrock 100 feet below the Straits of Mackinac and the 4-mile-wide channel joining Michigan and Lakes Huron for replacement of the aging Line 5 pipelines.

Environmentalists criticized the decision and the process that rushed through a lame-duck legislative session. Time was short for both the panel and only five days for the public to review the agreements. Mike Nystrom, the newest panel member, was appointed just three days before the meeting. However, the fact is, Gretchen Whitmer, the incoming Democratic Gov., and Dana Nessel, the Attorney General, promised during their campaigns to close the 65-year-old Line 5 pipelines.

The documents of the agreement got posted online at mipetroleumpipeline.com. Ed Golder of the Michigan Department of Natural Resources said that the documents are critical to discussion and essential for the public to go through it to make the substantive comment if any before they finalized.

Environmental groups called the process of public comment a “sham.” On meeting the criteria in the bill signed by Gov. Snyder, the panel needs to approve the tunnel agreements.

As reported by Michigan Radio, Mike Ripley of the Chippewa Ottawa Resource Authority didn’t find the board legitimate to take a decision and mentioned the process to be undemocratic in Michigan’s lame-duck Legislature.

The supporters from some unions and employees of Enbridge talked about the safety of running pipelines through the tunnel to transport oil and liquid gas and discussed factors like employability and economy connected to it. The new infrastructure would be less likely to result in oil spills than the current pipelines. Critics are worried about the rupture of the existing pipes that will contaminate drinking water and pollute the Lake’s shoreline.

Snyder mentioned the same supporting arguments in his remarks following the decision as per Crain’s Detroit report. According to Snyder, the removal of the pipeline from the bottom of the Straits of Mackinac will help in maintaining critical infrastructure links between peninsulas and providing energy security to residents of northern Michigan and Upper Peninsula. The process will also create good-paying jobs.

Beth Wallace, Conservation Partnerships Manager of National Wildlife Federation Great Lakes Regional Center, said that no end date is yet set by this backroom deal for the twin pipelines sitting in the Great Lakes open waters at present. The Snyder administration wants to dress the status quo as progress.

However, opponents are more concerned about the involvement of the state into building infrastructure supporting fossil fuel. According to the IPCC Report, scientists warn that emissions of greenhouse gases need to be reduced rapidly to combat climate change effectively.

Frank Hawthorne, Petoskey, Michigan resident asked that if they need to transition away from fossil fuel fast, then in this situation, how Michigan would justify building expensive Straits tunnel in response to the challenges of the future.