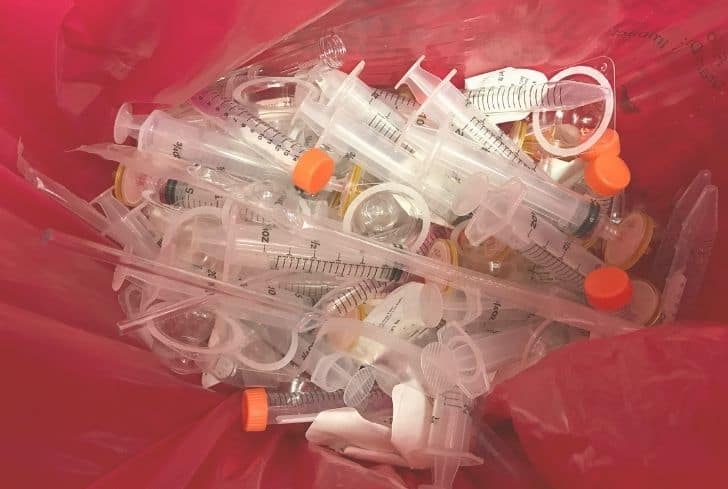 They are those medications purchased over the counter, the majority of which are bought without a prescription. Most people go for them to alleviate headaches, colds, acid reflux and allergies, among other health conditions, but they also need to be handled properly.

If placed in the trash, they contaminate landfills and when flushed, they disrupt the sewage treatment process and the microbial ecology of surface water. Leaving them carelessly could also cause injury, especially if misused by children or other illnesses if misused by adults.

These include non-hazardous or non-controlled prescription medication, such as those used to treat diabetes, bacterial infections, and blood pressure. They are dangerous if used by anyone other than those to whom they are prescribed or those who do not clinically need them.

Despite them being classified as non-hazardous, they still pose a health risk to the environment. In certain jurisdictions, it is against regulations to trash these drugs and instead, they should be sent back to a manufacturer or a medical facility for proper disposal through medical waste incineration.

This involves any waste that can potentially result in death or serious illness or such waste that poses significant hazards to human health or the environment if improperly stored, disposed of, transported or treated. Such kind of drugs are highly regulated and a provider of such drugs must properly dispose of them.

It is advisable that these kinds of drugs, including prescription, non-controlled, and over-the-counter drugs that are in the hands of consumers, be disposed of in a recommended envelope or collection receptacle.

These are those drugs classified to require control as they are highly addictive, can be easily abused or are toxic if accidentally taken in high amounts. The controlled drug substances ought to be disposed of in a manner that meets the laid-upon requirements.

In most cases, they are collected in a satellite container onsite, consolidated, audited, packed and transported before being treated and finally disposed of by a regulated substance disposal company or agency.

These are the drugs and pharmaceuticals given to or sprayed on domestic animals such as dogs, cats, and cattle. In developed nations, these pets and various other animals are cared for in their respective ‘hospitals’ but in other places, they can receive such treatment at home.

The treatment could be for when they are ill, or for prevention of the spread of viral or bacterial diseases. Once the drugs are done with, they are often disposed of in landfills and they further contribute to pharmaceutical waste.

These are the drugs sprayed on crops for the prevention of dangerous crop viruses, weevils and insects, and other bacteria that would harm crops, either in the field or soon after harvest. After they are sprayed, they end up remaining and end up being thrown away, just like the other drugs mentioned above.

These WWTPs focus on stopping waste from reaching the water or sources of water. Generally, they do not entirely remove all pharmaceutical waste in their treatment processes, because of a lack of proper design.

The majority work on eliminating the waste from being discharged into the environment, where it would contaminate the surface or underground water, and can, therefore, stop the waste at one point, and have it taken out to landfills away from water bodies.

Pharmaceuticals have been designed to be consumed by humans as well as animals. Once we take them in, they take care of what is ailing us and we get better. However, the same drug will have to get out of the body, through excreta and sweat. It means the pharmaceutical waste will be part of our urine and fecal matter, meaning it will eventually find its way into the environment.

They are the last stop and the responsible authority for dealing with pharmaceutical waste. However, they also act as a source of the same through how they dispose of the waste. They receive such waste from hospitals and other institutions for proper disposal of the waste and they will care for it in the most appropriate way.

Most prescriptions, are taken in but end up remaining because a patient felt better. In the case of treating animals, the same applies and these drugs end up remaining. The most natural way for humans to dispose of these unused drugs is by throwing them away or flushing them. In doing so, they end up in the environment, or in the waterways, contributing to pharmaceutical pollution.

Some hospitals take their unused drugs for disposal to the respective drug manufacturers or pharmaceutical waste treatment plants. However, nursing homes, in particular, are notorious for flushing medication down the drain especially if a patient dies or are transferred.

See also  Hazardous Waste Disposal and Companies Involved in it

This is primarily because they do not have a return policy with drug manufacturers in place similar to that of most hospitals. These healthcare institutions, therefore, contribute to pharmaceutical waste

6. Homes and Farms Where Food is Grown

When growing crops either at home or by large farms, they have to be sprayed with pesticides for the prevention of viral diseases, bacterial infections or insects and weevils that could affect the production. These pesticides are another source of pharmaceutical waste, especially if not all the drugs are used in the process.

Not all pharmaceuticals refer to those drugs taken for illnesses. They could also refer to personal care and beauty products like fragrances, and cosmetics. They are usually applied as creams and lotions and they are not absorbed in full by the body, in which case, the unabsorbed portions are washed off the body and end up in the environment.

These are considered as non-hazardous pharmaceuticals if they contain the right amount of chromium, cadmium, and selenium. The amounts are classified as sufficient if they fail the toxicity test or if there is insufficient information to make such a determination. They might not cause harm to a human, but might be of particular impact to the environment.

They usually include drugs used for chemotherapy, physostigmine, antiviral drugs, antineoplastic agents, some bioengineered drugs, and some other miscellaneous drugs that are regulated as hazardous. They ought to be handled carefully by everyone, including healthcare personnel, to reduce occupational exposure.

In some cases, they require modification of formulation and sometimes, they don’t, in order to reduce the significant risk associated with such drugs especially to healthcare personnel. For instance, solid, capsule or intact coated tablet antineoplastic drugs that are administered to a patient without modification of formulation, do not pose such a significant risk of direct occupational exposure and as such, do not require special handling measures.

However, for instance, if a tablet is crushed, there is the risk of inhaling, making possible contact or splashing, exposing a medical professional. In such cases, they require proper engineering, work practice controls and the use of personal protective equipment.

They are usually used in case of a skin infection or condition affecting the skin. They could also be cosmetics used on the skin for beauty or for the protection against the harsh sun. They are safe to handle but caution ought to be taken especially where there are children, who could easily ingest them or apply them incorrectly.

The Resource Conservation and Recovery Act (RCRA) is a piece of legislation in the United States through which the Environmental Protection Agency (EPA) governs how hazardous waste ought to be treated and later disposed of. Non-RCRA drugs simply mean they are non-hazardous and their respective waste is not governed by RCRA laws, although it should still be disposed of properly to protect the communities, the environment, and comply with state and federal regulations.

Such waste accounts for about 85% of all hospital pharmacy inventory waste. Non-hazardous waste ought to be segregated and incinerated or disposed of in white containers with blue lids, labeled ‘for incineration. Non-RCRA pharma waste and items are not included on any lists that could raise environmental concerns and is, therefore, not managed by federal regulations.

P-list drugs are listed by the EPA as hazardous. Some P-listed hazardous waste pharmaceutical containers include syringes, vials, IV bags and tubing and should be managed as hazardous waste. Drugs listed under the ‘P’ category are considered acutely toxic and could include nicotine, warfarin and epinephrine drugs.

Facilities producing more than 220 pounds of hazardous waste or more than 2 pounds of P-listed hazardous waste are regarded as large-quantity generators, and they must receive EPA identification numbers as well as inform the agency on their waste-generation activities.

these are controlled substances, regulated by the Drug Enforcement Agency of the United States and are managed separately from non-controlled waste pharmaceuticals. They include fentanyl, hydromorphone, lorazepam and morphine, among many others. The Agency authorizes that such waste be disposed of in the presence of at least two witnesses, be documented and conducted in an ‘irretrievable’ manner.

As the Agency does not specify exactly what ‘irretrievable’ is, the most common and cheap method of disposing of the drugs has been flushing them down the drain, which eventually affects the environment and especially bodies of water. However, disposing of such drugs in needle containers labelled ‘sharp’ or other pharmaceutical waste containers does not qualify as ‘irretrievable’ as they are not tamper-proof methods.

Some drugs are used in the treatment of livestock for the betterment of the livestock’s health. Vaccines, for instance, boost the immunity of these animals from specific diseases and also play a major role in eradicating some dangerous diseases that affect both the livestock and humans. The Newcastle disease has been known to kill all the chicken in an entire village and the Goat Plague or Pest of mall ruminants (PPR), have killed thousands of goats.

Some examples of drugs for livestock treatment include iodine solution, used to treat wounds, sulphonamide powder for treating diarrhea in suckling animals, some worm medicine like Anthelminthic treats worm infections and antimicrobial or antibacterial drugs are used widely in animal production for treatment and prevention of diseases. These animals will excrete some of the drugs while part of it will go unused and will form part of agricultural pharmaceutical waste.