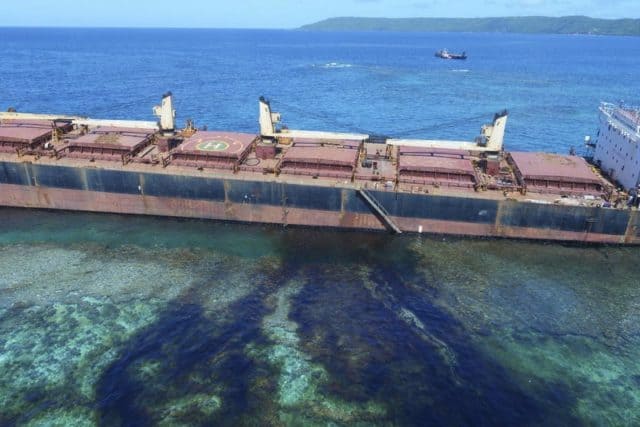 An oil spill with devastating impacts threatens the Solomon Islands, an endangered environmental gem of Pacific Ocean, when a mining company’s cargo ship ran aground on Rennell Island on Feb. 5.

In early February, bulk carrier MV Solomon Trader ran aground on a reef on the Rennell, a remote island in the south of the Solomon Islands, in its attempt to load bauxite from a nearby mine.

Rod Brazier, Australia’s High Commissioner to the Solomon Islands, said in a statement, “Australia is extremely concerned at the scale of this disaster.” He said, “The impact of this oil spill will have a devastating effect on the surrounding environment, including potentially on a protected UNESCO World Heritage Site, as well as the livelihood of the people of Rennell.”

“We are very concerned about the circumstances that have led to this disaster. Our friends in the Pacific, including the Solomon Islands Government, do not tolerate reckless behavior by companies,“ Brazier added.

Bintan, an Indonesian mining company in the Solomon Islands, chartered the cargo ship with a load of bauxite used in the production of aluminum. After it ran aground on Rennell Island on Feb. 5, oil started leaking out of the ship into the surrounding waters.

The disaster took place in the East Rennell Island which is a World Heritage Site of the United Nations Educational Scientific and Cultural Organization (UNESCO).

In a statement on the oil spill on Feb. 20, UNESCO said: “East Rennell was inscribed on the World Heritage List in 1998 and is the largest raised coral atoll in the world.” It is a “true natural laboratory” for scientific study.

The spill is not contained, and lousy weather from Cyclone Oma delayed and also prevented earlier efforts to assess the vessel and impact of the spill on the environment.

According to the Associated Press, Bintan abdicated any legal responsibility for the spill saying that it was only the chartering company and had no liability related to crash.

“As a charterer only, we have done what we could to coordinate and assist the shipowner and their engaged professional salvage since the beginning of the accident. We will keep doing so,” Bintan chief executive Fred Tang told the ABC.

King Trader Ltd., the ship’s operator, sent a team to salvage the vessel.

Above all, Bintan made the situation worse by stirring up the oil while continuing with loading operations where the ship ran aground in the bay as reported by The Guardian.

“Bauxite extraction and loading are continuing in the bay,” a source in the islands told the paper. “That is further churning up the oil.”

Already 60 tons and more of fuel spilled into the ocean and more than 600 tons of oil remain on board as per the assessment of Australian Maritime Safety Authority. Australia, US, and New Zealand sent specialists to help with the cleanup and salvage operations.

Loti Yates, the Director of National Disaster Management Office, said: “The Government is very clear in the directive to the company to have the salvage done, remove the oil, cleaning up the environment and removing the wreck from the Solomon Islands.”

As per a Guardian’s source in the Solomon Islands, those efforts were, at best, overstated. “All of the evidence indicates very little prospect of imminent action that would involve getting the oil off the vessel and preventing the ongoing spill,” said the source.

AP reporting concurred with that assessment and as per this week’s footage, little progress evidenced in stopping the leaking of oil from Solomon Trader ship since the incident took place.

Within the boundaries of the property, approximately 1,200 Polynesian people occupy four villages, and they live on subsistence gardening, hunting, and fishing.

A member of the local community, Derek Pongi, said “It’s impossible to fish or swim in the sea. The people rely on the sea, but now it’s all contaminated and polluted. Things are not looking good for my people.”

Australia’s Department of Foreign Affairs and Trade said, the high risk of leaking of the remaining oil is still there, and it was “profoundly disappointed” by the slow response.

Greenpeace Australia Pacific, while calling the spill “outrageous,” in a tweet, said that the “direct threat” to the island and the 2,000 people living there required “immediate action, compensation [and] remediation.”