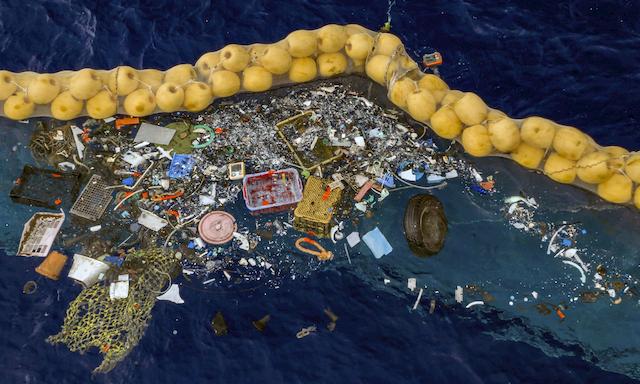 The ocean cleanup device deployed in “The Great Pacific Garbage Patch” has finally picked up plastic successfully for the first time from the high seas. This floating boom was designed by Dutch scientists to clean up an island of rubbish in the Pacific Ocean between Hawaii and California, which is about double the size of Texas and three times the size of France.

“Today, I am very proud to share with you that we are now catching plastics,” Ocean Cleanup founder and CEO Boyan Slat said at a news conference in Rotterdam.

Boyan Slat is the creator of this Netherlands-based nonprofit Ocean Cleanup project, who tweeted that the 600 meter-long (2,000ft) free-floating boom had finally captured and retained debris from the Great Pacific Garbage Patch.

The picture of the collected rubbish includes even a car wheel. Slat wrote: “Our ocean cleanup system is now finally catching plastic, from one-ton ghost nets to tiny microplastics! Also, anyone missing a wheel?”

Every year fishing gear of about 600,000 to 800,000 metric tonnes, is abandoned or lost at sea, and another 8m tonne of plastic waste flow in from beaches.

The vast garbage patches are formed by a whirlpool of ocean currents called “gyres” that pull marine detritus into one location, allowing the largest accumulation of plastic in the world’s oceans, according to the National Oceanic and Atmospheric Administration.

Several of these patches exist in the world’s oceans.

The large floating cleaning system is also designed to collect microplastics as small as 1 millimeter along with discarded fishing nets and other sizeable visible plastic objects.

The giant U-shaped plastic barrier or tube floating on the surface of the sea has a three meter-deep (10ft) net-like skirt below it to trap some of the 1.8tn pieces of plastic, but it also allows marine life to pass underneath without disturbing them.

Its position is located via satellites with the help of the transmitters and sensors fitted to the device so that a vessel can collect the accumulated rubbish every few months.

As told in a press conference in Rotterdam, the challenge Slat was seeking to meet was the huge expense of using a trawler to collect plastics.

He said: “We are now catching plastics … After beginning this journey seven years ago, this first year of testing in the unforgivable environment of the high seas strongly indicates that our vision is attainable and that the beginning of our mission to rid the ocean of plastic garbage, which has accumulated for decades, is within our sights.

“We now have a self-contained system in the Great Pacific Garbage Patch that is using the natural forces of the ocean to passively catch and concentrate plastics, thereby confirming the most important principle behind the ocean cleanup system. This now gives us sufficient confidence in the general concept to keep going on this project.”

The plastic gathered so far will be brought to shore in December for recycling. The project believes there may be a premium market for items that have been made using plastic reclaimed from the ocean.

Ocean Cleanup project has been planning to build a fleet of these devices and predicts it will be able to reduce the size of the patch by half every five years.

“I think in a few years’ time when we have the full-scale fleet out there, I think it should be possible to cover the operational cost of the cleanup operation using the plastic harvested,” Slat said.

Now it is required to make the device more durable by scaling up the device so that it can retain plastic for up to a year or possibly longer when the collection becomes necessary.

There have been setbacks since the system set sail from San Francisco in September 2018, which Slat called “unscheduled learning opportunities.”

In December, the group announced that the system wasn’t picking up trash.

A 60-foot boom broke apart during an initial four-month trial, and no plastic was collected.  The whole thing had to be pulled back to shore, along with trash 4,400 pounds and more it had collected.

Since then, several changes have been made to the design, which includes the addition of a “parachute anchor” to slow down the device’s movement in the ocean and allowing faster-moving plastic debris to float into the system. The size of a cork line on top of the skirt also increased to avoid plastic washing over it. The floating barrier moves with the plastic and other rubbish driven by wind and waves.

In 2013, the project was started, and several major revisions incorporated in its design. The latest trial began in June by launching the new System 001/B into the sea from Vancouver. It is expected that the final design will be able to clean up half of the debris in the Great Pacific Garbage Patch.