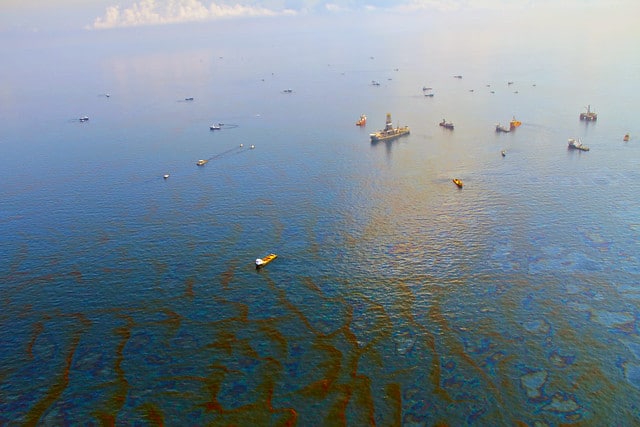 The Deepwater Horizon’s oil spill disaster spread much more extensive and deadlier toxic effect in the Gulf of Mexico than previous estimates, a new study has found. It was the worst offshore oil spill in U.S. history, approaching its 10th anniversary in April.

A study by two University of Miami researchers discloses a significant amount of oil and its toxic footprint that moved beyond fishery closures being contained and escaped detection by satellites as it flowed near the Texas shore, west Florida shore and within a loop current that carries Gulf water around Florida’s southern tip up toward Miami.

The “invisible oil,” as the researchers dubbed it in their study, published Wednesday in Science, is concentrated below the surface of the water and toxic enough to destroy 50 percent of the marine life it encountered. The recent estimates show the 210 million gallons of oil released by the damaged BP Deepwater Horizon Macondo spread over the equivalent of 92,500 miles.

However, according to the new study, the reach of the oil was 30 percent larger than that estimate. “Oil in these concentrations for surface water extended beyond the satellite footprint and fishery closures, potentially exterminating a vast amount of planktonic marine organisms across the domain,” the researchers wrote. The findings show the limited understanding of the government of how oil flowed from Deepwater Horizon and that it underestimated the extent to which toxic crude poisoned the marine life.

The study comes as the Trump administration is preparing to finalize a sweeping proposal allowing the oil and gas industry to buy leases in every part of the Atlantic, Pacific, and Arctic oceans and also the expansion of lease in the Gulf. The bid of the administration to issue permits to several companies to map the Atlantic seafloor for exploring oil and gas deposits has been holding back for more than a year by a federal court challenge.

Along with American history’s most massive expansion of lease permits, the administration has also rolled back oil platform safety regulations meant to protect workers and avoid another event like the fatal Deepwater Horizon explosion.

The Deepwater disaster happened on April 20, 2010, by a blast that killed 11 workers and sank the oil platform. For five months, thick, toxic oil billowed from a damaged well off the Louisiana coast until the workers managed to seal it. The oil reached Texas, Mississippi, Alabama, and Florida, spreading with squid-like tentacles.

In a massive spill response, large amounts of oil reached beyond the containment effort of federal workers, contractors, and volunteers to detect it, contain it, and use chemicals to disperse it and were still not fully accounted for, the study says.

Claire B. Paris-Limouzy, a professor of ocean sciences at the University of Miami Rosenstiel School and the study’s senior author, started developing a model during the Deepwater Horizon blowout that provided a fuller picture of the oil’s footprint compared to the two-dimensional satellite imagery provided by the National Environmental Satellite, Data and Information Service.

The model helped researchers to trace Deepwater Horizon’s oil from its source and finding how it was manipulated by wave action, mixed with ocean plumes, and sank and rose to and from the ocean floor. The model also tracked Hurricane Alex that swept through the Gulf with powerful southeasterly winds between June 28 and July 1, 2010, just more than two months after the disaster started, “enhancing and mixing and bleaching the Deepwater Horizon oil,” the study said.

Paris-Limouzy’s co-author, Igal Berenshtein, a post doctoral associate at U-M Rosenstiel, said he immediately noticed a discrepancy between the model’s footprint and the satellite’s.

“That is what kicked off our study,” Berenshtein said. “The extent was larger than the satellite footprint and the fishery closures” — areas that federal marine scientists designated as contaminated zones. “One of them must be wrong, right? There was strong support that the footprint extended beyond the satellite data and the closures.”

The satellite failed to detect the oil in smaller and lighter concentrations that reached larger areas of the West Florida Shelf around Tampa than previously known. It even extended beyond Naples and curled around Florida’s southern tip. It also reached an area in the farther west known as the Texas Shores, farther west.

Even though the oil was lighter in concentration than the surface oil, but it was extremely toxic, Berenshtein said. “Basically, when you have oil combined with ultraviolet light it becomes two times more toxic than oil alone. Oil becomes toxic at very low concentrations.”

Berenshtein said he was startled by the model’s results. “I think it kind of changes the way you think about oil spills,” he said. “I didn’t think this way before I did this study. I assumed that the satellite image captures the oil spill and that’s it. People have to change the way they see this so that they know there’s this invisible and toxic component of oil that changes marine life.”

The Deepwater Horizon oil spill “was no regular oil spill,” Paris-Limouzy said, and cannot be examined simply with satellite images. “It happened in the deep ocean. Between the deep sea floor and the surface is a lot of water.” Oil in that water is tossed far from the surface by hurricanes, tropical storms, and natural wave action, among other things.

See also  Could clean water soon become a thing of the past?

“If you want to respond to this kind of spill, you have to know where the entire mass is, the amount of oil that came out of the well, and know that the footprint is not only on the surface, but in three dimensions,” she said.