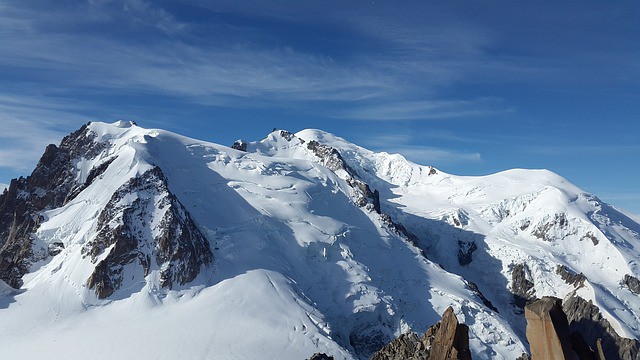 An enormous Planpincieux glacier on the Italian side of Europe’s highest mountain, Mont Blanc, may collapse any time now. Authorities needed to close roads and ordered the evacuation of Alpine huts.

Experts found a piece of the Planpincieux glacier on the Grandes Jorasses peak which is containing 250,000 cubic meters of ice could fall down the mountain as the sheet of ice was moving much faster than usual, the mayor of nearby town Courmayeur, Stefano Miserocchi said.

The glacier was threatening part of the Ferret Valley according to the experts from the Safe Mountains Foundation (Fondazione Montagna Sicura) in the Aosta Valley. Mr Miserocchi has ordered the evacuation of huts on the mountain, at the height of 4,810 meters (15,780 feet) and the closing of two roads. He said, “Public safety is a priority.”

The glacier’s lower part was sliding at a speed of 50-60cm per day between the August end, and the beginning of September and Miserocchi said the rate had “significantly increased” recently.

The glacier, which is over a kilometre square, hangs over a precipice southeast of the mountain’s summit and is under close monitor since 2013. Previously it had moved at a rate more than 30cm a day only eventually during the summer months.

“These phenomena show once more how the mountain is experiencing a period of great changes due to climate factors, so it is especially vulnerable,” Mr Miserocchi said.

“There are currently no empirical models or methods that can enable quantitative predictions in the case of glaciers with sliding dynamics such as Planpincieux,” Miserocchi added.

However, no immediate risk is seen in residential areas as per Mr Miserocchi. This warning reminds the increased risks the climate crisis poses, which Italian Prime Minister Giuseppe Conte mentioned while addressing at the UN general assembly on Wednesday.

“News that a glacier on Mont Blanc risks collapsing is a warning that can’t leave us indifferent, it must shake us up and we have to mobilise,” Giuseppe Conte, said. However, there is no way to be informed precisely when the glacier will collapse as per the experts, and there is no warning system in place.

Italy’s Fondazione Montagna Sicura (Safe Mountain Foundation) wrote on Facebook: “From 19.30 pm today, the municipal road of Val Ferret will be closed – between the locations Montitaz and Planpincieux – and the road for the location for the potential glacial risk linked to the glacier of Planpincieux.”

Last time in 2017, the ice of about 50 cubic meters, fell from Planpincieux, while a mass of ice broke away from the Glacier de la Charpoua, on the southeast side of the Aiguille Verte, on the French side of Mont Blanc in September last year.

The evacuation order came into force on Tuesday of homes and mountain refuges in the area. A precautionary measure has been taken, and there was no threat to residential areas or tourist establishments, he said. The affected zones fall in the area of Val Ferret.

Across the Alps, disappearing glaciers and the increasing danger of melting permafrost is a concern due to warmer temperatures.

In a new report of the World Meteorological Organisation released this week, it warned that the ice in the eastern and central areas of the Alps could completely disappear within two or three decades if average temperatures continue to rise at current levels. Year-round glaciers would remain only in the tallest part of the mountain range in the western Alps.

Glaciers are melting due to rising temperatures. The environmental activists in Switzerland were holding their second “mourning ceremony” on the evaporating Pizol glacier in the Glarus Alps of the country on Monday. Up to 90% of the volume of the glacier is lost since 2006. A similar event was held at a glacier in Iceland in August.

This summer, the heatwave across Europe have accelerated the melting speed.