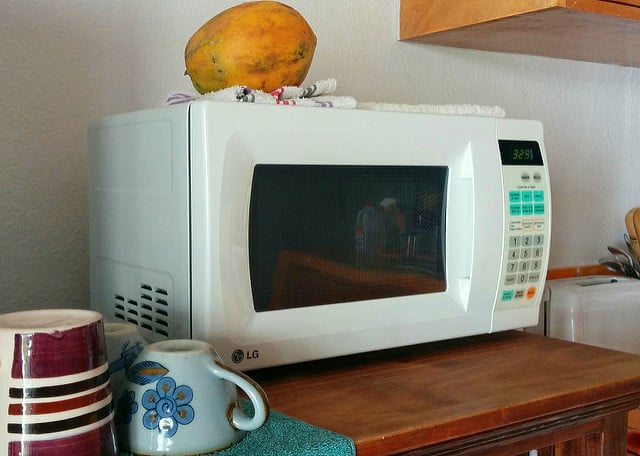 Studies in Manchester University revealed that carbon dioxide emissions by the use of microwave ovens across the EU alone, are equivalent to what is emitted by nearly seven million cars. Researchers at the University have carried out their very first comprehensive study of the environmental influence of microwaves, considering their whole life cycle. The study revealed the following:

-> Microwaves emit 7.7 million tonnes of carbon dioxide equivalent per year in the EU. This is equivalent to the annual emissions of 6.8 million cars.

-> Microwaves across the EU consume an estimated 9.4 terawatt-hours (TWh) of electricity every year. This is equivalent to the annual electricity generated by three large gas plants. Efforts to reduce consumption should focus on improving consumer awareness and behavior to use appliances more efficiently.

According to analysis from Manchester University, microwaves, of all types of ovens, are the most sold in the European Union (EU), estimated to reach about several millions sales by 2020. It seems to be that the large number of it being used currently in the EU, is what pointed the attention of the world to its impacts.

The study carried out by the University, used the “life cycle assessment, (LCA),” to estimate the impacts of microwaves on the environment,  considering the manufacture, use and how it is disposed. The research team analysed 12 different environmental factors — climate change, depletion of natural resources and ecological toxicity.

For example, the manufacturing process causes a whooping 20% depletion to the natural environment and to the Climate. In their research, they found out that the greatest impact that the use of micro waves has on the environment, is in its consumption of electricity. Also, it was said that the disposal of used electric gadgets is one of the fastest growing streams of waste products in the world.

Dr Alejandro Gallego Schmidt from the school of Chemical engineering and analytical science, Manchester University, said, “Consumers now tend to buy new appliances before the existing ones reach the end of their useful life as electronic goods have become fashionable and ‘status’ items. As a result, discarded electrical equipment, such as microwaves, is one of the fastest growing waste streams worldwide.”

The news by Manchester University seems to not take some things into consideration. It is true from studies that it consumes almost 10 terawatts of electricity, and that it emits a lot of carbon dioxide too. What this should make us aware of is that there are a lot of microwave ovens out there, and the cumulative electrical load is high, more than it needs to be because of the standby power used running the clocks and other electronics.

The University of Manchester keeps using some comparisons which we just need to properly reflect on. Their study, which found that, on average, an individual microwave uses 573 kilowatt hour (kWh) of electricity over its lifetime of eight years. That is equivalent to the electricity consumed by a 7 watt LED light bulb, left on continuously for almost nine years. Really, it’s quite clear that microwaves don’t consume as much as they deduced.

For an oven which uses that amount in eight years, equivalent to what a 7 Watts LED bulb uses in nine years; or 1.14 times the power consumption of an LED bulb. This isn’t killing the planet as they supposed. The analysis is a ‘life-cycle’ analysis and that is why we have such large figures. They look at the energy and carbon generated in the manufacture and disposal of microwaves.

The Guardian noted that microwave ovens are the most efficient way to cook. Comparing them to cars is ridiculous. David Reay of the University of Edinburgh said, “Yes, there are a lot of microwaves in the EU, and yes, they use electricity, but their emissions are dwarfed by those from cars – there are around 30m cars in the UK alone and these emit way more than all the emissions from microwaves in the EU.”

Simon Bullock, senior climate change campaigner, Friends of the Earth, tells the Guardian that people should look at their source of power. “Yes, it’s important to use microwaves efficiently; but so is making sure the electricity that powers them is as low pollution as possible. The government should reverse its policy attacks on solar and onshore wind. We need green electrons powering all the nation’s tellies, microwaves and fridges.”

It is thus clear that the supposed impact that microwave ovens have on Earth is due to the millions currently in use in the world and is only true for its life span, which is about 8 to 9 years. Over the same period of time, any electrical gadget could have the same impact.