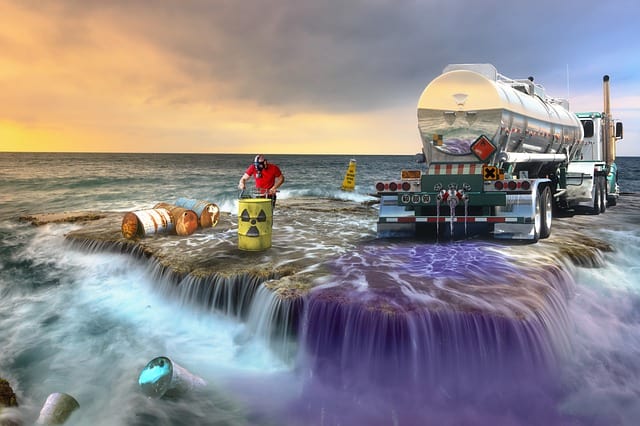 Dumping radioactive water straight into the Pacific Ocean could be the only option left to Tokyo Electric Power of Japan or Tepco, as collected from its destroyed Fukushima nuclear power plant in huge quantities, the environment minister of Japan said on Tuesday.

Since the plant was struck by a tsunami and an earthquake in March 2011, triggering a triple meltdown, Tepco has collected 1 million tonnes and more of contaminated water from the cooling pipes which were used to keep fuel cores from melting. It forced tens of thousands of residents to evacuate.

The buildup of groundwater became contaminated while mixing with water that used to prevent the three damaged reactor cores from melting and Tepco has struggled a lot to deal with it.

Tepco tried to remove most radionuclides from the excess water. However, the technology to get rid of tritium, a radioactive isotope of hydrogen, does not exist. Coastal nuclear plants usually dump water into the ocean that contains tritium that is hard to separate and considered as relatively harmless. It occurs in minute amounts in nature.

Last year Tepco admitted that the water in its tanks is still having contaminants other than tritium and it faces opposition from local fishermen. The decision of disposing of the wastewater into the sea would anger local fishermen, as it took them eight years to rebuild their industry.

Almost 1,000 tanks at the Fukushima Daiichi site is holding more than 1m tonnes of contaminated water, but it will be short of tank space by the summer of 2022, the utility has already warned.

“The only option will be to drain it into the sea and dilute it,” Yoshiaki Harada told a news briefing in Tokyo on Tuesday. “The whole of the government will discuss this, but I would like to offer my simple opinion.”

The final decision regarding the disposing of the radioactive water is awaiting a report from a panel of experts. Tepco would follow the policy after the government made a decision, a spokesman for the utility said. Vaporising the liquid or storing it on land for an extended period is among the other options.

Yoshihide Suga, Japan’s Chief Cabinet Secretary, described Harada’s comments as “his personal opinion” in a separate press briefing. Harada also did not mention the quantity of water that would be needed to discharge into the ocean.

According to a recent study by Hiroshi Miyano, leading the committee studying the decommissioning of Fukushima Daiichi at the Atomic Energy Society of Japan, the discharge of the treated water could take 17 years after being diluted to reduce radioactive substances to levels meeting plant’s safety standards.

The green signal from the government for dumping the waste into the sea would disturb nearby South Korea having concern over its impact on the reputation of its seafood. Seoul last month summoned a senior Japanese embassy official for an explanation on how the Fukushima water would be dealt with.

“We’re just hoping to hear more details of the discussions that are underway in Tokyo so that there won’t be a surprise announcement,” told by a South Korean diplomat to Reuters, requesting anonymity because of the sensitivity of bilateral ties.

The foreign ministry of South Korea said in a statement that it had asked Japan “to take a wise and prudent decision on the issue”.

For a dispute over compensation for Koreans who were forced to work in factories in Japan in World War Two, the relations are already frosty between the East Asian nations.

“The government must commit to the only environmentally acceptable option for managing this water crisis which is long term storage and processing to remove radioactivity, including tritium,” a senior nuclear specialist with Greenpeace Germany, Shaun Burnie, said in an email.

The government built a frozen underground wall spending 34.5bn yen (£260m) to prevent groundwater reaching the three damaged reactor buildings. The barrier has only succeeded in reducing the flow of groundwater from about 500 tonnes a day to around 100 tonnes a day.

Japan is under renewed pressure to address the contaminated water problem before Tokyo hosts the Olympics and Paralympics next summer.

Six years ago, the Prime Minister, Shinzo Abe, assured the international community during the city’s bid for the games, that the situation was “under control”.