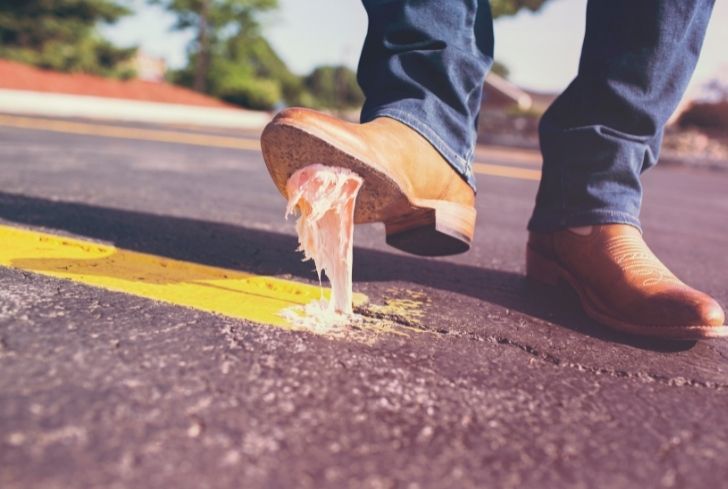 Chewing gum is everyone’s go-to candy. Although the first gums were made from tree sap, it’s now made from synthetic rubber and is one of the most enjoyed past-time candies. It comes in different flavors, shapes, and colors. Some of the various types we’re used to include sticks, pellets, hollow balls, liquid-filled gum, gum-filled candy, compressed gum, etc.

Beyond its sweetness, chewing gum is a functional food. This means that it provides other benefits, which are primarily health-related. Studies have shown that chewing gum can help reduce stress, improve memory, and help in decision-making. It has also been discovered to improve alertness and even help people lose weight.

Despite the alleged health benefits provided by this sticky treat, we must not overlook its cost to the environment when we’re done chewing. Is it environmentally friendly? And how does it affect our planet? Keep reading to find out more.

Once we’re done chewing our gum, we often throw it out without thinking about where it’ll end up; we fail to consider if it’ll end up decaying or decomposing. Chewing gum is one of the most common forms of litter due to common practice.

Chewing gum is also made from plastics, and these plastics are in the form of polymers that don’t biodegrade. These plastics make it difficult for gum to be broken down by common environmental microorganisms.

It’s also made from wax and polyvinyl acetate rubber. And all these are resistant to the biological process of breaking down because they are manufactured to be long-lasting. This is why when you throw your gum carelessly on the floor or in a bush, it just sits there.

Even our bodies find it difficult to break down and digest chewing gum if we swallow it. And you might wonder if the different digestive juices, acids, and microorganisms in our stomachs aren’t strong enough to digest them. But the truth is, they’re not. Little pieces of ingested gum can still be excreted from our stool intact.

See also  Is Gum Littering? (And a Waste?)

How Long Does It Take for Gum to Decompose?

It has been established that chewing gum doesn’t decompose. This is because it takes a very long time for it to decompose. It can take about 50 years for gum to start its decomposition process and anywhere between 500-1000 years for complete disintegration.

The length of the decomposition process is because chewing gum is made of about 80 percent plastic. These include plasticizers that help increase the gum’s flexibility and reduce its viscosity.

It also emulsifies different chemical elements that might not blend well together. The plastics also include polymers that contribute to their stickiness and stretchiness

As a result of all these synthetic materials used to make chewing gum, bacteria and other microorganisms alone can’t break it down. It also requires brute force and UV light from the sun to begin the decomposition process. This allows the plastic and rubber in the gum to disintegrate into microplastics over hundreds of years.

If you try to compost chewing gum, you’ll have a pile full of excessive gum. Gum remains in the same form for hundreds of years before it even starts to break down. And after that, it takes another hundred years to break down completely.

So, unless you want to have a compost pile for about a thousand years, using it in your compost pile won’t be such a good idea.

You can, however, use a Hotbin composter if you have one. It’ll just take a longer time to be broken down than other types of waste. The safest thing to do is throw your used gum in a non-biodegradable garbage bin. But make sure you wrap it in some aluminum foil first.

Is Gum Bad For the Environment?

Chewing gum is a sweet treat. But the bad thing about this treat is that it has some harmful effects on our environment. It’s, in fact, considered an environmental nightmare.

Yes, gum is bad for the environment. First of all, chewing gum is the second most common form of litter, next to cigarettes. It’s often found on sidewalks, under benches and tables, or even in escalators, as it sticks firmly to asphalt and concrete paving because it’s made from polymeric hydrocarbons.

Removal of stick chewing gum is also challenging and slow. It involves hours of using a steam jet as well as scrapers. This costs a lot of taxpayers’ money. Some cleaning agents can also be harmful to the environment when it gets to the ground. The chemicals cause damage to the soil because it affects the nutrients in it.

See also  Is Pretty Litter Biodegradable? (And Bad for the Environment?)

Chewing gum can also cause harm to animals if they consume it. Animals such as birds can consume the gum, mistaking it for food. It can clog their digestive system and choke them, killing them. In wildlife, it can accumulate toxins in fish over time which get reintroduced into the food chain when we eat the fish.

There are some controversial ingredients in chewing gum that contribute to the harmful effect on animals. These include aspartame, an artificial sweetener that can expose rodents to increased cancer risk. It also contains titanium dioxide, which gives some gums a white color and a smooth finish. However, it’s been connected to organ damage in older animals.

Finally, when burnt in landfills or other trash, chewing gum can cause air pollution by releasing dangerous chemicals into the air. This is because of the synthetic rubbers and plastic contained in the gum. When we breathe in these chemicals, it can lead to endocrine problems, asthma, and even cancer.

Is There Plastic in Gum?

Chewing gum is made with a gum base. Historically, this gum base was made using natural ingredients such as chicle sapodilla from the sapodilla tree. However, due to its scarcity during the Second World War, scientists began to look for alternative ways to adapt the recipe for the gum base. That’s when they started introducing plastics into the ingredients for chewing gum.

The gum base can be a combination of waxes, rubbers, and, yes, plastics. The plastics include polyvinyl acetate, which is an elastomer. These are long polymer molecules that help give the gum its elastic properties. So, chewing gum does indeed contain plastics.

Polyvinyl acetate is manufactured with vinyl acetate, known to cause tumors in lab rats. This chemical has raised so much concern that some countries have added it to a list of substances considered toxic.

Apart from the plastics contained in chewing gum, there are other ingredients that it contains that might have you taking a step back. One of these is butylated hydroxy anisole (BHA). BHA is considered to be human carcinogenic.

Also, artificial sweeteners such as aspartame have been linked to adverse effects in humans such as headaches, seizures, leukemia, mood swings, and even tumors and death. If ingested in heavy doses, aspartame can cause brain damage due to its major constituents, aspartic acid, and phenylalanine.

One major problem with disposing of chewing gum is that most consumers think it can get broken down. So, many are okay with sticking it on walls, on the sidewalk, or under tables and chairs.

Chewing gum, once chewed and spat out, contains whatever pathogens or infectious diseases the consumer has. These can pose a health risk to other people by being transmitted if not correctly disposed of. It also costs the government a considerable amount of money yearly to pick up after you.

Gum is also not compostable, so there’s no use putting it in your compost bin. But rather than throwing your used gum carelessly and having it contribute to litter, there are a few ways to dispose of chewing gum safely. These will prevent your used gum from being a public health hazard.

You may think that the first safe option is to throw your gum into a regular garbage bin. This may help keep the streets clean, but your gum won’t get recycled and will end up occupying space in a landfill. Experts say that a used piece of chewing gum can be appropriately wrapped in foil paper and thrown into a non-biodegradable garbage bin.

We barely remember to look for foil paper-even though most gum packaging comes with foil-let alone look for a non-biodegradable garbage bin. However, recently, a modern company has developed a safe way to recycle chewing gum.

The gum is molded into new products such as children’s toys, lunch boxes, and coffee cups. It’s a bright pink bin named Gumdrop, which creates a closed-loop recycling process once it’s full.

What’s even more interesting is that the closed-loop recycling process sees the whole bin itself recycled once it’s full. And they’re even used to create new bins.

These eco-friendly pods can be mounted anywhere from walls to poles and can be used in car parks, at home, toilets, walkways, etc. All you have to do is make sure the pods are visible and easily accessible.

Gumdrop pods can be left out for up to four months but not any longer. This helps to maintain its hygiene and ensure its freshness and appeal to the public.

It may be challenging to convince people to stop chewing gum due to its massive effect on the environment. But there are now brands that have returned to the traditional way of making chewing gum; using chicle.

The gums are also biodegradable because they are primarily natural ingredients and provide a healthy, eco-friendly alternative.