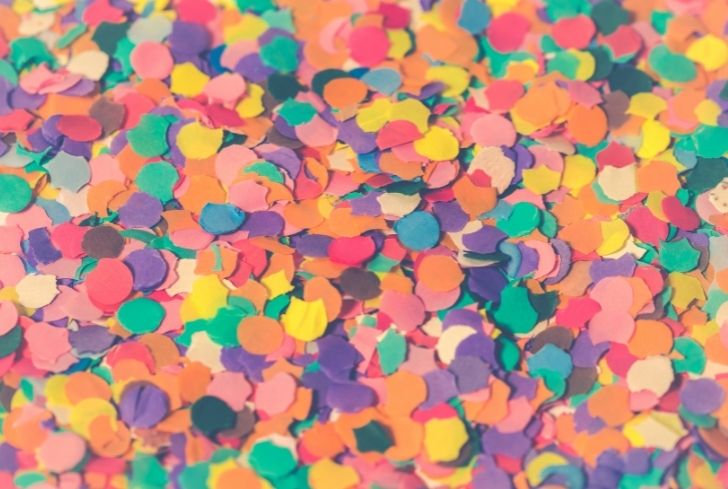 These colorful little pieces of paper are referred to as confetti. They are entertaining to play with and are used everywhere. Children love them, adults love them, and there are many ways to use them. Nowadays, food enthusiasts even use various colors of the edible type to decorate cakes, muffins, and ice cream. We can’t just get enough of confetti.

Confetti is very easy to make. All you have to do is shred pieces of paper, colorful or otherwise, into tiny pieces and shapes. They also come commercially. This means you can very easily purchase a bag of confetti if you don’t have time for all that shredding and cutting.

Beyond the excitement that comes with confetti, however, we mustn’t forget to be eco-conscious and take a look at its impact on our environment. So, in this blog post, we’ll be focusing on the biodegradability of confetti and whether it’s bad for the environment. We’ll also look at what alternatives are there to confetti.

Is All Confetti Biodegradable?

The first type of confetti is metallic or foil confetti. It’s typically used as decoration because it reflects light and gives a shiny or glimmer effect. Metallic confetti gives the area where it’s used a sparkle, making it one of the most commonly used types.

However, metallic confetti is not biodegradable or even compostable. So, it doesn’t break down or decompose when disposed of. It just stays the way it is and litters the environment when the wind blows it away.

The next type of confetti is flower confetti. As the name implies, this confetti type is made from flowers or dried rose petals. They are often used to provide a sophisticated look for more mature ceremonies. They come in various shapes and colors and come from different flowers such as lavender, chamomile, mint, calendula, etc. Rose petals are incredibly excellent for weddings.

Flower confetti is an excellent substitute for metallic or plastic confetti. This is because they are eco-friendly and quickly biodegrade. You can even leave them lying around after you’re done with them and not worry about it causing any adverse effect on the environment.

Paper confetti is made from paper that’s as thin as toilet tissue. This is probably the most common type of commercial confetti. Its thinness, as well as the fact that it’s designed to biodegrade, makes it a more appealing choice of confetti. Some companies even use actual tissue paper in the manufacture of their confetti.

Paper confetti has little to no impact on the environment when it degrades. The susceptibility of the paper confetti to the action of rain or any other water source, wind, and microorganisms, makes the degradation process easier. This makes paper confetti every environmental enthusiast’s first choice.

Nevertheless, synthetic dyes are more problematic when used on clothing as the concentration level is significantly higher. But paper confetti requires very little. Besides, most companies nowadays use mostly natural coloring in place of dye.

How Long Does It Take for Confetti to Decompose?

The amount of time it’ll take confetti to decompose depends mainly on what type of material is used to make it. Metallic confetti, for example, won’t biodegrade because it’s not made of natural materials. The metallic element used to make it isn’t biodegradable. But it can, however, melt in scorching temperatures and become harmful to the environment.

Plastic confetti can also melt in high temperatures but takes thousands of years to biodegrade completely. Paper confetti, however, will decompose in about 2-4 months. But depending on the weather conditions, it can deteriorate even faster.

Flower confetti is natural. And so, it’s biodegradable. It’ll typically take about 1-3 months to degrade completely. However, it can decompose within a few weeks under suitable weather and temperature conditions. Again, this is only if the manufacturer hasn’t used paints containing metals or plastics to make it.

Paper confetti will also biodegrade without a trace. However, the time it takes to decompose depends on the weather and available moisture content.

See also  Is Bleach Biodegradable? (And How Long it Takes?)

If it’s wet, it can break down in a few days, but if it’s dry, it’ll take a little longer to decompose, probably a few weeks, depending on the level of wind and rain. If it’s composted, then it can take months to decompose.

Confetti can make for beautiful decorations during your parties, but it can be quite toxic to animals or humans if ingested. Often, when we’re done using our confetti, we leave the pieces lying about, and the wind eventually carries them. These pieces can end up in our rivers and other water bodies.

The fishes and other species in our waters end up consuming these pieces, and this can cause damage to their internal organs. Plastic and metallic confetti are the most harmful types, unlike flower confetti which is still a little safe because it’s organic.

Plastic confetti contains microplastics that accumulate in the tissues of these animals and cause liver toxicity and lesions.

Is Confetti Bad for the Environment?

Yes, confetti is not so great for the environment, to answer this question. It may be small, but it can have huge and lasting consequences on the ecosystem. Confetti is biodegradable, but that doesn’t mean that it can’t cause harm to the environment in other ways.

It doesn’t make it easy that traditional confetti is made up of polyvinyl chloride (PVC) and other forms of plastics. And it’s already common knowledge that plastics take up to a thousand years to completely degrade. It also litters the environment and can cause harm to wildlife if ingested.

Metallic and foil confetti also don’t decompose. They can remain where you left them for about a hundred years if the wind does not blow them off. This ends up polluting and littering the environment.

The shine from the foil confetti can also attract fishes to ingest them, which can cause them harm. This type of confetti is not recyclable partly due to its tiny size and because the metallic film is generally not recyclable.

What Can You Use Instead of Confetti?

The thought of excluding confetti from our party necessities is appalling. After all, it has many uses beyond adding fun and zest to your event. This party favorite also provides a form of aesthetic appeal, and you can use it to create the grandest entrance.

Confetti comes in so many different forms. Some are good for the environment while others are not so good. But what do you do when the only options you think you have are the ones that cause harm to the environment?

You look for alternatives that are safe for the environment.

See also  Plastic, Aluminum, or Glass Bottles - What to Choose?

The first alternative is using natural flower petals. We’ve already established that this is one of the safest types of confetti because it’s biodegradable. So, you don’t have to worry about picking up the petals when you’re done. It’s also cheap, naturally fragrant, and gives your event an elegant aesthetic.

Another alternative is to use seed paper. It’s a perfect addition to your outdoor events because it’ll sprout wherever they’re thrown. This makes it easier to clean up. If you still want the glamour of confetti without using harmful foil confetti, this is your go-to option.

The next alternative might be a little strange but is perfect if you’re looking to make your event fun, especially for the kids. It’s bubbles! Yes, bubbles. They’re fun to blow and look great in pictures. However, when using them, you have to be careful of the type of soap you mix to avoid having soap stains on your guests’ outfits.

Rice is also a very common alternative. Some traditions believe that throwing rice at a wedding is a way to wish the new couple good luck. But, it’s advisable to get decomposable rice that easily disintegrates with water.

You can also use artificial snowflakes instead of confetti. They create a beautiful illusion of snow falling over your event. They’re also a sustainable and eco-friendly option because they melt off once they come in contact with water and are self-cleaning.

If you’re looking to go a little boho, you can opt for feathers. They’re a very cute way to spice up events, especially weddings. If you can’t pick your feathers naturally, you can buy a bag of feathers at your local store. Fireworks are also a fantastic alternative that’ll help add some sparkle and color to your event.

Finally, birdseed works great for aesthetics for your events. The exciting part is that birds automatically perch on them once they’re thrown, creating an excellent backdrop for pictures. They’re eco-friendly and great for wildlife.

Most of us are already used to the traditional types of confetti. However, they leave a negative impact on the environment. We also use confetti in a large quantity, which means massive effects if we don’t take care.

Now that you know the different types of materials used to make confetti, however, and whether or not they’re eco-friendly, you should be able to make a more informed decision when picking out confetti for your next event. The alternatives provided will also help make your decision easier.