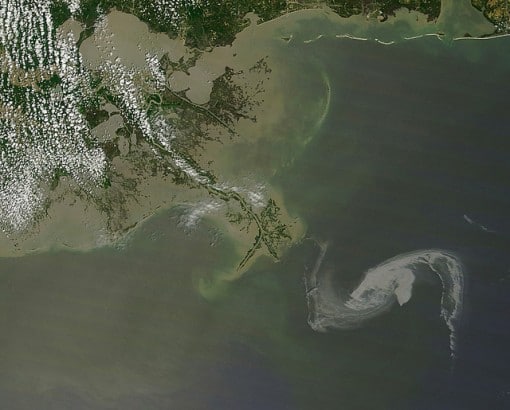 Oil spill is a form of pollution. An oil spill happens when crude oil or refined oil products are released into the water or on land. Huge tankers or trucks can be a major cause of oil spill when transporting large volume of oil from one place to another. Deliberate dumping of oil on the ground, motor oil leakage or other oil products into the environment can be other sources of oil spills and can lead to soil pollution which can give rise to underground water contamination. An oil spill isn’t a simple matter, nor is it uncommon. The damage caused by oil spill can be large and can take along time to clean up.

Oil spill can happen either on land or on sea. Both forms of pollution can cause great damage to the environment in the form of air, land or water pollution. When oil is spilled over the water, it creates a shiny substance on the surface of it that prevents marine animals to survive. Though it is known that man-made factors are responsible for major oil spills, but the fact is that oil spills can also be caused by tectonic events. Both factors can cause damage to the health of living organisms in surrounding area.

Fact 1: Iraqi forces intentionally released over 300 million gallons of oil into the Persian Gulf in 1991 as part of the offensive in the Gulf War.

Fact 2: The Deepwater Horizon, an oil rig located in the Gulf of Mexico, exploded in April of 2010. This is one of BPs biggest oil disasters. The explosion dumped 210 million gallons of oil. The effect on the Gulf of Mexico and surrounding communities is felt to this day.

Fact 3: Ixtoc 1, a well located on the coast of Mexico exploded and pumped 140 million gallons of oil into the Campeche Bay.

Fact 4: In February of 1983 a well in the Iraqi field of Norwuz had a small oil spill. A later air attack increased the spill size to a total of 80 million gallons.

Fact 5: Castillo de Bellver, a Spanish tanker, caught fire off Cape Town in 1983 and spilled over 78 million gallons of oil in to the sea.

Fact 6: In 1978, the Amoco Cadiz ran to ground near Portsall, France. This accident spilled over 68 million gallons of oil

Fact 7: In 1988, just off the coast of Newfoundland, the oil tanker Odyssey came apart in a storm and spilled 43.1 million gallons of oil into the ocean.

Fact 8: In 1979, there was a collision between two different tankers near the islands of Trinidad and Tobago. The combined total oil spilled in the ocean surpassed 83 million gallons. To make matters worse, while one of the ships was being towed to shore, it spilled another 41 million gallons into the sea.

Fact 9: Production Well D-103, which was located in Libya, exploded and sent 42 million gallons of oil into the surrounding environment. This happened in 1983.

Fact 10: The worst spill in history is not the Exxon Valdez spill as once thought. The undersea spill at the BP rig in the Gulf of Mexico is now thought to have spilled up to 39 million gallons of oil.

Fact 11: The oil from the Deepwater explosion is also credited with killing off over 150 endangered sea turtles and over 300 sea birds.

Fact 12: The Interior Department of the United States found their own Minerals Management Service, at fault for failing to conduct a review of the BP Deepwater operations for potential environmental impact as they didn’t think that an oil spill was likely. This is a part of the reason that the response to the spill was slow and disorganized.

Fact 13: Charges were levied by the Department of the Interior Inspector General against certain Minerals Management Service offices for taking gifts from BP during the drilling operation and for falsifying safety inspection reports.

Fact 14: In the Gulf of Mexico there is a phenomenon called the “Loop Current.” This is a current that flows through the Gulf, around the Florida Keys and East Coast, as well as around Cuba and the Yucatan. That current is now carrying oil from the BP spill, creating a broader range of hazard.

See also  Biodegradable Plastics: Formation, Types and Problems With Them

Fact 15: Another potential hazard of the BP oil spill in the Gulf is the location of it in what is considered to be a hurricane corridor. This not only increases the risk of the oil spreading further on water, but can introduce it to airborne travel as well.

Fact 16: The owners of the Deepwater rig, Transocean Ltd., made a large profit on the disaster. Unlike the MMS office they were very aware of the risks of an accident. The company insured the rig for twice what it was worth and collected $270 million dollars when it exploded.

Fact 17: BP did make moves to become more transparent by releasing their oil spill response plan. Anyone who bothered to read it questioned their commitment to either transparency, or helping to prevent future spills in the Gulf. Most of the “plan” is blank, and there are lingering references to types of wildlife and other concerns that aren’t even present in the regions BP has rigs. Some of them are blatantly lifted from the oil spill plan for the arctic area created after the Exxon-Valdez spill.

Fact 18: One of the other issues that is arising due to the spill in the Gulf are the numbers of people being made sick, and the amount of shrimp that is considered to be inedible – courtesy of the chemicals that were also spilled during the accident.

Fact 19: On many online gambling sites, you can now get good odds on the bets hedged for which species will be the first to go extinct as a result of the BP spill.

Fact 20: If you do the math for the BP oil spill, it can be a little frightening. While the average oil spill has dumped better than 40 million gallons of oil at one time into the ocean, the BP spill dumped 200 million gallons a day for 87 days.

Fact 21: Texas, Louisiana, Mississippi, Alabama, and Florida all have claims against BP as their coastlines were affected by the spill.

See also  Is Silicone in Shampoo Bad for the Environment?

Fact 22: Now that the well isn’t pumping oil anymore everyone should be safe, right? Not so fast, oil that is in the water still has to come ashore and 8 years later, it still is. This affects marine, animal and human health.

Fact 23: Don’t forget, 11 people died in the BP rig explosion and an additional 17 were injured. There is no estimate on how many other people were made ill from the resulting impact of the oil on the environment.

Fact 24: A $20 billion oil spill response fund was created by President Obama, which is nice, but how much money has been set aside for safety inspections?

Fact 25: It took 5.5 million feet of boom, an absorbent barrier that is used to collect and absorb oil, to contain and clean up most of the spill.

Fact 26: Over a ¼ of the Louisiana coastline is polluted by oil.

Fact 27: One method used to remove oil during the spill that has a devastating effect on the environment is the practice of on-situ burning. This is where oil is contained on the surface of the water with floating barriers and then burned.

Fact 28: Within in 6 months of the spill, over 8,000 animals had died – many of whom were on the endangered list. There is no current calculation for how many aquatic fish and species were harmed.

Fact 29: BP was fined over $40 billion for the accident to help with the cleanup and settlement costs. They are currently fighting to have that amount reduced in court.

Fact 30: In the end, over 30,000 people came to the Gulf to help respond to the emergency. They helped to contain and remove oil, assist wildlife and help clean up the area as best as could be done. In 1978, the Amoco Cadiz ran to ground near Portsall, France. This accident spilled over 68 million gallons of oil.