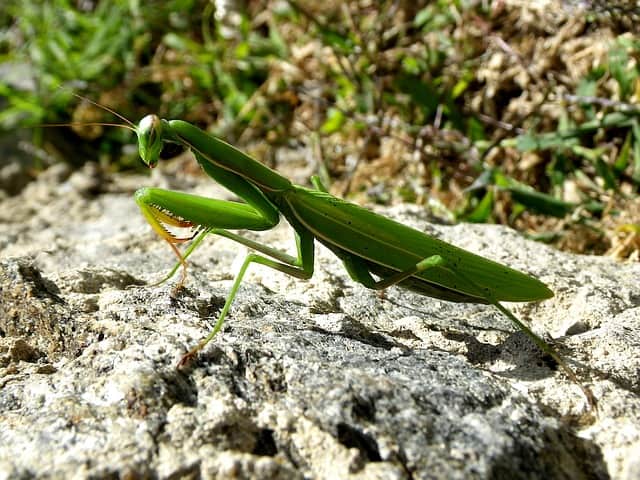 Praying mantis are a group of insects in the order Mantodea. They are described as lean insects that feed a lot and whose body are built specifically for hunting. In addition, they have relatively big eyes, lightning fast arms, and are extremely mobile with a swiveling head. They are known for their skills in ambush attacks. Their major geographical location is in the tropical and temperate regions and may be found in either forests or even deserts.

The number of the mantis species is estimated to be over 2400. There are also 430 genera and 15 families. Out of the 2400 species, only one species is endangered. Their upright posture with arms folded while stationary, led them to be given the name praying mantis. Moreover, mantis name has a Greek origin and comes from the word “mantikos” which means a prophet. Herein are 20+ magnificent facts about praying mantis.

Fact 1. Most praying mantis live within the tropic regions

Out of the estimated 2400 species, only 18 are native in North America. The number of exotic species of mantis found in America is more than the native. For instance, the Tenodera aridifolia is a Chinese mantis that was introduced in Philadelphia almost a century ago. The Chinese mantis can measure up to a hundred millimeters.

Also, another mantis from Europe, Mantis regiosa, was also introduced in New York near Rochester almost the same time as the Chinese mantis. This mantis is green in color and is half the size of the Chinese mantis. Both species of exotic mantis are commonly seen around the northeastern side of US.

Fact 2. Flexibility of the neck area

The articulation of the neck area of the mantis is remarkably flexible compared to any other insect. Therefore, most mantis is capable of rotating their head to almost 180°. The flexibility of the head is an adaptation tactic of the mantis.

Fact 3. Mantioda genus of the mantis family has a prothorax that bears the head and the forelegs

Fact 4. They have a common ancestor

The mantis and the cockroaches are believed to have a common ancestor. The insects are classified into a superorder, Dictyoptera. This classification is based on their close evolutionary relationships.

Fact 5. The praying mantis are also classified on the basis of their wings

The mantis is classified into macropterous (Long-winged), apterous (Wingless), brachypterous (macropterous), and brachypterous (short-winged). Mantis have two sets of wings except for the wingless ones. The outer wing also called the tegmina are narrow and leathery. The wing is used for camouflage and in some instances as a shield for the other pair of the wing which are delicate.

Fact 6. The only method used to determine the sex of the mantis is by looking at their abdomen

The abdomen of both male and female mantis has 10 tergites with the male having corresponding nine sternites. On the other hand, the female has seven sternites that can be noticed easily.

Fact 7. The female mantis lays her eggs during the fall in temperate regions

Fact 8. The vision of the mantis is stereo

They use their sense of sight to locate the prey. Their eyes are compound having over 10,000 ommatidia. The mantis uses a small area called fovea located at the front to locate and examine the prey due to its high visual acuity and resolution. A combination of head movements and rotation helps the mantis trace the prey.

The peripheral ommatidia are used to perceive motion. The location of the two eyes on lateral sides helps the mantis have a wide area of view. The stereoscopic vision and the binocular vision allows the mantis to be a good predator.

Fact 9. Most species of the mantis are diurnal, however, others tend to fly at night such as the mantises in the Liturgusidae

Most mantises that fly at night are predominantly males. The males fly at night to locate females that are less mobile. This behavior can also be an adaptive characteristic because most of their predators feed during the day. They also have a way of detecting bats movement through their auditory thoracic organs.

Fact 10. The mantis is majorly predators who feed mainly on other small arthropods

Most of them are ambush predators whereby the stalk the prey’s movement or they can stand still and camouflage waiting for the prey to get close. There is large mantis that hunts and eats vertebrates such as frogs, fishes, and lizards.

They use their strong spiked raptorial legs to rapidly grasp a prey. Other mantises such as the Lagerella and Entella pursue their prey on the ground. Nevertheless, the Chinese mantis eats pollen grains which increases their lifespan and fertility.

Fact 11. Some mantis feed on other mantises

The large mantis is known to hunt and feed on another mantis. Also, the female mantis does feed on their mates. Most females bite and feed on the males head. These acts are aimed at increasing the mating process by removing the inhibitory organ.

The cases of such acts in the wild are approximately 30%. 83% of mantis males are able to escape the sex cannibalism. Sex cannibalism is also a natural way of reducing the number of male mantis.

Fact 12. The earliest mantis to be recorded dates back to the Cretaceous period that is 66 to 146 million years ago

This kind of primitive mantis lack the characteristics shown by other mantises. They lack extended neck and leg spine.

Fact 13. The mantis can act as a biological pest controller

They are predators and, therefore, they can feed on the pests found on the farm such as the caterpillars. As a result, some companies sell their eggs to the farmers.

Fact 14. The mantis is also a predator

The mantis can kill important pollination insects such as the bees.

Fact 15. Mantis use camouflage to protect themselves against this predators.

Animals such as spiders, ants, hornets, wasps, birds, frogs, and lizards prey on mantis and for this reason, the mantis use camouflage to escape predators. The camouflage depends on the area that the mantis is and the species. Mantis in the bare land is dorsoventrally flattened to eliminate any shadow that may give out their location. The flower mantises are aggressive mimics as they can resemble the flowers.

Other species found in Australia or Africa may turn black in color to camouflage with the environment that has been burnt. If the mantis is directly threatened, it stands and raises its spiked raptorial legs. It then spreads its wings which makes the mantis look bigger. If the threat persists, they strike back using their raptorial legs or even bite. They use the raptorial legs to rescue themselves from birds of prey.

Fact 16. The mantis has a very good ambush tactic on prey

They are known for their ambush tactic and can wait for a prey to come close without being noticed through mimicking the twigs around. The raptorial legs can easily kill their prey. The fact that they have a wide selection of small insects they can eat makes them have a good supply of food.

Fact 17. They have echolocation detection capabilities

Some mantis are able to detect the echolocation sounds that are produced by the bats. When the frequency of the sound increases, they stop flying horizontally and start flying downward.

Fact 18. The lifecycle of a mantis is incomplete metamorphosis

They undergo the egg, and nymph stages before maturing into an adult.

Fact 19. Mantis have been widely used in arts to represent courage and fearlessness

They have also been used in coins in the 15th century, where they are portrayed in a fight stance. Ancient Chinese also used it as a symbol of striking fast and without hesitation as an act of war.

Fact 20. Some martial arts practices in China are adapted from the mantis

Fact 21. The mantis are associated with various myths and religion

In Southern Africa, the Khoi and san community revere the mantis. Due to their posture, they are referred to as hottentotsgpot – meaning the god of the Khoi. They are also seen as god in various other numerous African mythology.

In the Luo culture – the Nilotic People of Africa, it is believed that when a mantis enters or is spotted within the house in the evening; a visitor should be expected the following day morning or a few days after. Mantis were also seen as a symbol of wisdom or as a prophet among ancient Greeks. The mantis have also been said to illustrate the proper posture for prayer.

Fact 22. They are kept as pets

The insects can also be kept as a pest. Due to the short lifespan, the people keeping them must breed them every year.