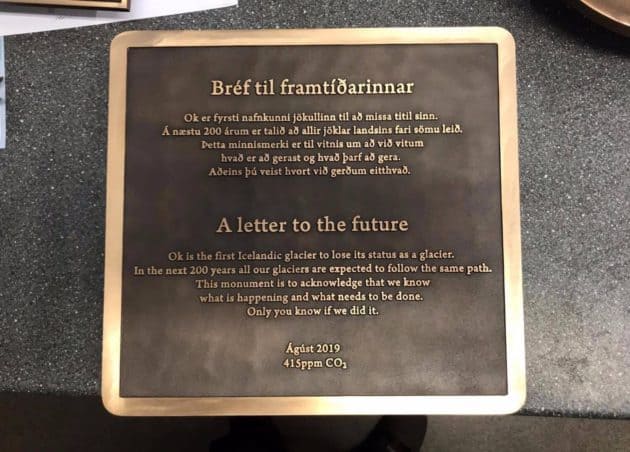 Iceland’s first glacier Okjökull or Okglacier succumbed to the climate crisis, an event which scientists and local people will remember through unveiling a commemorative plaque in August marking it as “the first Icelandic glacier to lose its status as a glacier.” Indeed, it is indicative of a dark future ahead.

Just a century ago, amongst 400 glaciers of Iceland, the former Okjökull glacier was 50 meters thick and covered 15 sq km (5.8 sq miles) of the mountainside in western Iceland. Now it has shrunk to hardly one sq km of ice less than 15 meters deep — no wonder why it will be no more called a glacier.

The unveiling ceremony at the site will be led by researchers from Rice University in Houston, Texas, a leading Icelandic author, Andri Snær Magnason, and the geologist Oddur Sigurðsson along with members of the Icelandic Hiking Society and the general public on 18 August in Borgarfjörður, West Iceland as per local media.

“Ok is the first Icelandic glacier to lose its status as a glacier. In the next 200 years, all our glaciers are expected to follow the same path,” the plaque reads, in Icelandic and English. “This monument is to acknowledge that we know what is happening and what needs to be done. Only you know if we did it.”

Dated August 2019, the memorial contains the words “415ppm CO2”, indicating the record-breaking atmospheric level of 415 parts per million CO2 recorded in May this year.

“We don’t know a planet like this,” meteorologist Eric Holthaus said in a widely shared tweet. “This is the first time in human history our planet’s atmosphere has had more than 415ppm CO2.”

By glacier, we mean a persistent mass of compacted ice that always moves under its weight. It accumulates more mass each winter than what it melts in summer. Otherwise, it is called “dead ice.”

An associate professor of anthropology at Rice, Cymene Howe said, the plaque “would be the first to a glacier lost to climate change anywhere in the world” and it should draw our attention to what is being lost, she said.

Howe and her colleague Dominic Boyer have been studying the economic and cultural impact of global heating and shrinkage of ice on Icelandic communities.

“By marking Ok’s passing, we hope to draw attention to what is being lost as Earth’s glaciers expire,” Cymene remarked in the press release. “These bodies of ice are the largest freshwater reserves on the planet and frozen within them are histories of the atmosphere. They are also often important cultural forms that are full of significance.” This plaque is said to be the first of its kind in the world.

Boyer said Okjökull’s fate “will be shared by all of Iceland’s glaciers unless we act now to radically curtail greenhouse gas emissions. ”

The northernmost part of the globe has been warming twice than the rest of the world, helping June to break the earlier records. According to Scientists, a sharp temperature rise in the Arctic is inevitable, likely to create a climate “tipping point.”

The two US researchers along with the former mayor of Reykjavik Jón Gnarr produced a documentary, ‘Not Ok,’ on the disappearance of the glacier, and to show how the climate crisis is affecting the lives of ordinary people. As per the filmmakers, scientists fear that all the 400-plus glaciers of Iceland will be gone by 2200 and the reason is global warming.

“One of our Icelandic colleagues put it very wisely when he said, ‘Memorials are not for the dead; they are for the living,’” Cymene continued. “With this memorial, we want to underscore that it is up to us, the living, to collectively respond to the rapid loss of glaciers and the ongoing impacts of climate change. For Ok glacier it is already too late; it is now what scientists call ‘dead ice.’”