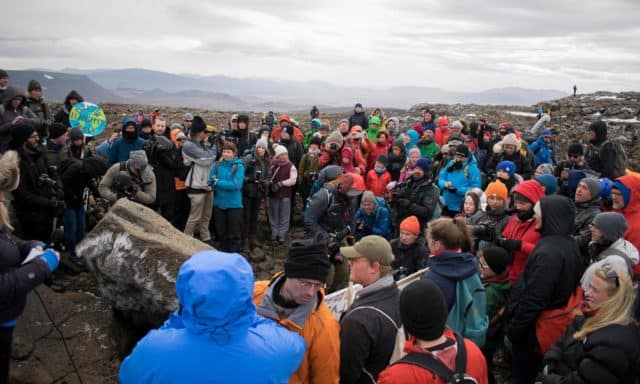 The funeral for the first-ever glacier lost to climate change was held by Iceland as the nation commemorates the once-massive Okjokull glacier with plaque. Scientists warn that immediate and effective action is needed to prevent hundreds of other ice sheets lying on the subarctic island from facing the same fate due to climate change as Okjokull.

In a ceremony, a bronze plaque was mounted on a bare rock, when the world marked the warmest July ever on record. The Okjökull glacier once covered the barren terrain in western Iceland.

Prime minister of Iceland, Katrín Jakobsdóttir, the former UN human rights commissioner Mary Robinson, and local researchers and colleagues from the United States, who pioneered the commemoration project, walked up to the mountain along with others, around 100 in numbers for the ceremony.

“I hope this ceremony will be an inspiration not only to us here in Iceland but also for the rest of the world, because what we are seeing here is just one face of the climate crisis,” Katrín said.

The plaque bears the inscription “A letter to the future” which is mounted to raise awareness about the effects of climate change resulting in the decline of glaciers.

“Ok is the first Icelandic glacier to lose its status as a glacier. In the next 200 years, all our glaciers are expected to follow the same path,” the plaque reads, in Icelandic and English. “This monument is to acknowledge that we know what is happening and what needs to be done. Only you know if we did it.”

The plaque is also labeled “415 ppm CO2”, referring to the record level of atmospheric carbon dioxide measured in last May.

“We don’t know a planet like this,” meteorologist Eric Holthaus said in a widely shared tweet. “This is the first time in human history our planet’s atmosphere has had more than 415ppm CO2.”

A professor of aerodynamics at the University of Berlin, Julien Weiss, who attended the ceremony along with his wife and 7 years old daughter, was one of those who were highly moved by the occasion.

“Seeing a glacier disappear is something you can feel, you can understand it and it’s pretty visual,” he said.

“You don’t feel climate change daily, it’s something that happens very slowly on a human scale, but very quickly on a geological scale.”

The plaque is “the first monument to a glacier lost to climate change anywhere in the world,” according to Cymene Howe, associate professor of anthropology at Rice University in Texas.

“By memorialising a fallen glacier, we want to emphasise what is being lost – or dying – the world over, and also draw attention to the fact that this is something that humans have ’accomplished,’ although it is not something we should be proud of.”

According to Howe, Iceland loses about 11bn tonnes of ice every year. Glaciers cover about 11 percent of the country’s surface, and scientists fear that all the 400-plus glaciers of the island will be gone by 2200 succumbing to climate change.

The first for Iceland, Okjökull was stripped of its glacier status by Glaciologists in 2014. According to a report from the University of Iceland in 2017, the glacier ice covered 16sq km (6.2 square miles) in 1890, but by 2012 it measured just 0.7sq km.

A glacier is a persistent mass of compacted ice that always moves under its weight. It accumulates more mass each winter than what it melts in summer. Otherwise, it is called “dead ice.”

In 2014, “we made the decision that this was no longer a living glacier, it was only dead ice, it was not moving,” Oddur Sigurðsson, a glaciologist with the Icelandic Meteorological Office, told AFP.