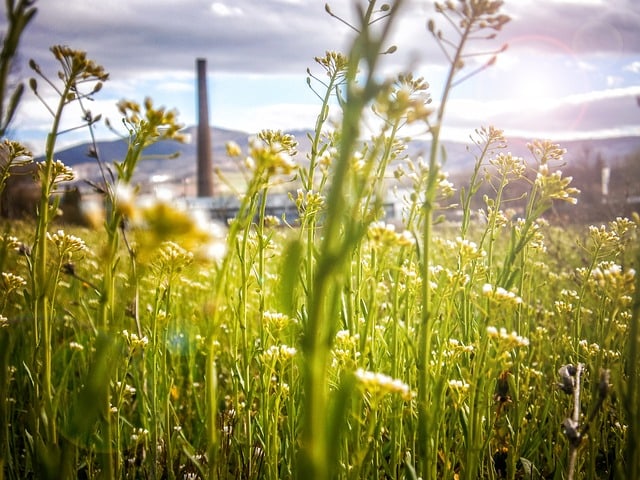 Are you feeling slightly blue over reports of extreme weather patterns and rising temperatures? The World Economic Forum reported early this year that weather change tops their list for global risks this year. So it’s natural to experience some alarm over the state of the world’s climate.

But along with these alarming reports come remarkable inventions, findings, and movements. Humans in all fields are rising to the challenge of doing their part in the fight against climate change.

Here are some out of the box ways individuals and businesses are doing their part to be eco-conscious citizens.

Farmers who are concerned with conservation have largely turned to no-till farming as a sustainable and eco-friendly way to farm. Traditionally, farmers have relied on tilling with tractors to prepare the soil for planting season. But tillage can injure both the soil and the environment by exposing the soil to erosion. Businesses like Exapta have created equipment that allows the farmer to puncture the ground and plant seeds.

Allowing the soil to remain undisturbed instead of tilling increases water retention in the soil. This results in less water needed for watering a crop. Additionally, reducing tractor use means fewer fossil fuels used during a planting season.

Planting a garden and farming are often touted as being a popular way to be eco-friendly that anyone can take up. After all, with a garden, you have vegetables and food production that does not need to travel thousands of miles to arrive at your kitchen table. But how you go about doing so matters as proven by enterprising eco-conscious farmers.

2. Vegetarianism to save lives, dollars and curb CO2 emissions

Surprise! #MeatlessMondays has more substance than its use as a trending Instagram hashtag.

BBC.com reports that a family of 4 consumes and emits more greenhouse gasses from the meat they eat than from driving 2 cars.

We are all likely familiar with the notion that too much red meat in one’s diet could lead to various cardiovascular troubles. And years of research proposes that adopting a vegetarian diet could save us from such illnesses.

But what is coming as a surprise to many is how cultivating livestock for our meat consumption contributes to 14 percent of CO2 emissions. Experts suggest that a vegan diet could cut global greenhouse gas emissions by about 70 percent.

There are food supply problems with the entire world deciding to go vegetarian in one go. But since only 3.2 percent of U.S. adults identify with being vegetarian, there is room for many more individuals to step away from the meat aisle.

A shift in diet to eating more vegetables will not only benefit the environment, but it will also have direct health benefits for the individual. Vegetarian diets are high in fiber and low in saturated fat. And therefore, they have been connected to cancer prevention. Studies of Japanese women who follow meat-based diets showed that those individuals were more likely to develop breast cancer than those who followed the traditional Japanese diet, which is plant-based.

3. The tiny house movement not just for tiny people

Heard of the tiny house movement? The movement has thousands of followers in the U.S. and more around the world. Did you think it was just some advanced expression of minimalism? Think again.

In a study by Oregon’s Dept of Land Quality, research shows that 86 percent of the environmental impact of a house is from energy used. The smaller the house, the less energy is required to heat, cool, illuminate, and keep it running.

Also, building a tiny house uses fewer materials to build. Generally, tiny houses are classified as structures that are between 100 to 400 square feet. A building at this size means less lumber that is cut for creating the abode. Less wood used also means less that requires transportation to the building site.

A smaller space means a limit to the number of gadgets and appliances that can fit in your tiny house. This equals less energy used on gadgets that require fossil fuels to run. Unrelated to the environment but directly good for individuals is spending more time outdoors. Which likely means increased physical activity. The benefits of being more physically active include lessened risk of Type 2 diabetes, heart diseases, and various cancers.

4. Citizen activism is the hope for the future

Does moving into a smaller living space not your cup of tea or not possible in your present circumstances? You can still adopt the mindset while staying in the same place.

Look for ways to reduce your use of electrical appliances. Turn off your heating and cooling system during days with moderate weather. Invest in solar panels if you want to go hardcore. An advantage to that is the 30 percent tax credit you get for installing them. Once it’s yours, you get electricity for free and can even sell some back to electricity companies for those months when you’ve made extra.

Often it takes a shift in attitude before individuals, communities, and businesses take that step to implement more eco-friendly solutions into their daily operations. The spark that triggers the shift is one caused by awareness. NGOs and organizations that bring environmental issues into the public eye play a vital role in creating that change in the public consciousness.

5. Increasing Clean Energy Can Save the Earth

The single most serious threat our planet is facing today is Climate change. The carbon emissions need to be reduced to levels agreed to in the Paris Climate Agreement to prevent catastrophic harm. As global energy demand is expected to increase 56 percent over the next couple of decades, it will be impossible to meet those emissions targets if we stick primarily with traditional fossil fuels. We can fix this up by if we try shifting 85% of the world’s energy supply to non-fossil fuel sources and invest in strategies like reforestation that capture carbon dioxide.

Those who benefit the most from fossil fuels aren’t usually the people who suffer the most from their use. Power plants and their toxic fumes, for example, are disproportionately found in poor, nonwhite neighborhoods.

One analysis has suggested that the gap in per capita GDP between the poorest and richest countries is already 25 percent wider than it would be without climate change, largely because temperature increases in tropical countries reduce agricultural productivity. Larger storms, droughts, and floods are already hurting the world’s poorest.

In the present scenario, we need to use already degraded land for energy development. We’re taking action right now, championing regulations that allow former mining lands to be repurposed for solar and wind energy. Tens of thousands of acres of degraded mine sites in Nevada’s Great Basin are now available for renewable energy development. By targeting already-disturbed land, new turbines and solar panels won’t need to destroy more natural habitat.

Green buildings of today are incorporating clean energy, and even small homes are installing solar panels. Therefore turning to solar, wind, or geothermal energy is the best way as they are environment friendly and do not have any aftereffects.

The 2015 Paris Agreement included a mechanism for richer countries to help poorer ones, to begin to make things right. The funding so far is inadequate, but it can be expected to grow, especially once the U.S. government accepts the global scientific consensus and rejoins the agreement.

6. Three ‘R’-Reduce, Reuse, and Recycle and avoiding plastic is crucial

Following these three “R’s” to conserve natural resources and landfill space can make a vast difference. We always need to keep in mind to cut down on what we throw away and using natural resources wisely, to avoid waste and above all for the sake of saving our environment and saving our Earth.

Plastic pollutes the environment in its all forms. Plastic causes littering, resulting in an imbalance in wildlife as well as aquatic life. Therefore, whether you are shopping for food, clothes or books, use a reusable bag, preferably made from cloth.

7. We Are In the Sixth Mass Extinction; We Can Still Change Course

We are in the sixth mass extinction, “mass” extinction, which paleontologists define as a period in which at least three-quarters of all species go extinct. New research suggests most species can be saved and wildlife restored to higher abundances with a combination of more parks and protected areas, restoration of some ecosystems, and a reduction in farmland.

Agriculture currently uses a third of the Earth’s land. Some Naturalists have called for a “half Earth” approach, in which half the planet is preserved as wilderness where human activity is carefully limited. Big parks are wonderful, and necessary for some species, but the effort risks displacing a lot of people.

But if we cut meat-eating and food waste in half, increase crop yields, and trade food more efficiently, the researchers estimate, we could grow all the food we need on less land. That would create more space for other species.

If you are ready to be a part of the solution, educate yourself on the problems. But do not stop there. Support these organizations through dollar donations or campaigning on their behalf. Government policy on climate change is key to preventing further risks to our world. And citizen activism is an essential part of making that policy change happens.