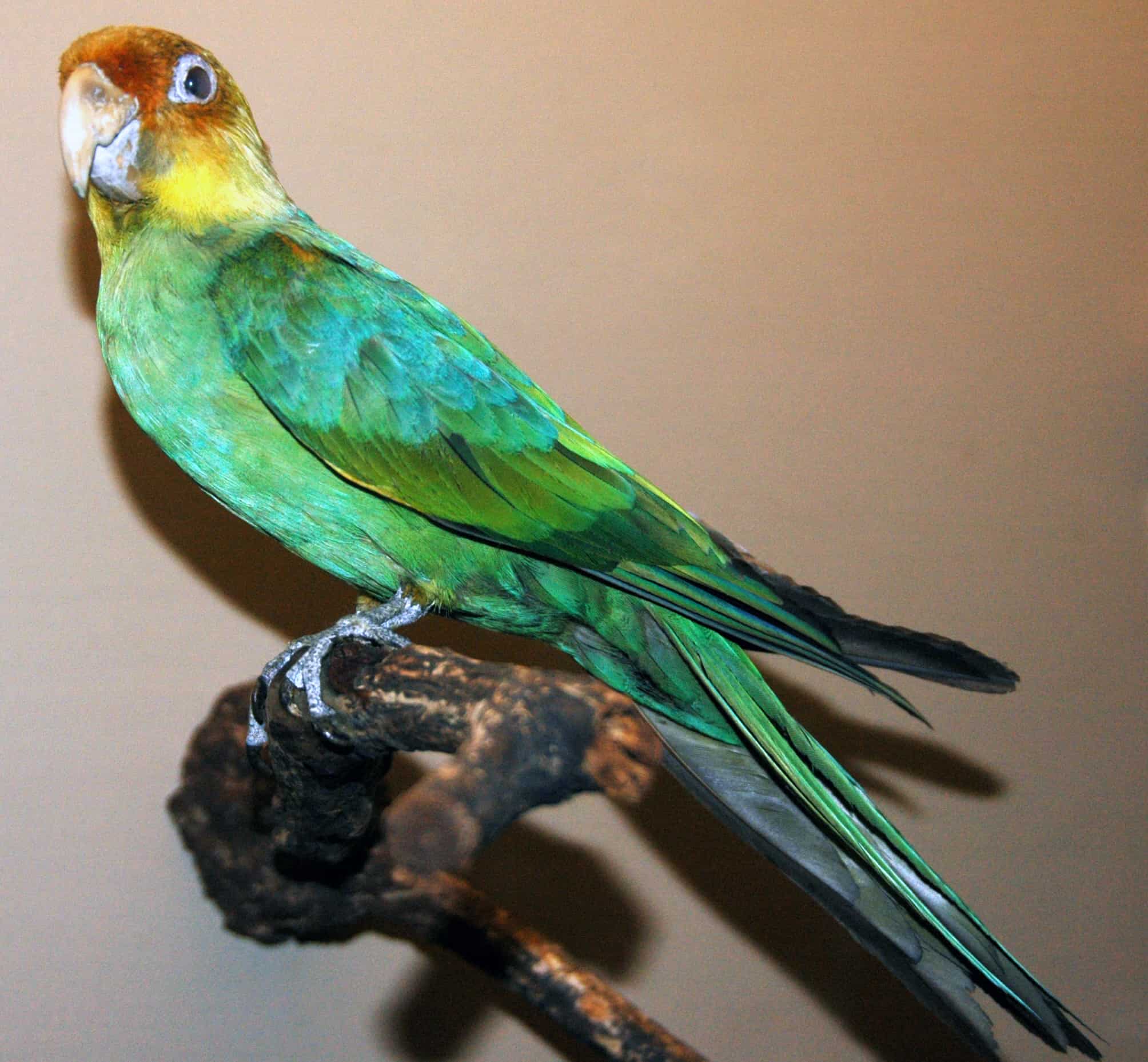 Humans are ‘sole culprits’ for the extinction of the only native US parrot, their genetic study confirmed.

A stuffed Carolina parakeet genome held in a private collection was sequenced by the scientists.

The signs of inbreeding characteristics of animals were not found in the DNA of colorful birds, and those also have been reducing for many years.

Instead, the genetic sequence suggests that populations were booming until the expansion of European settlers.

The bird that once found from New England in the east to Colorado in the west then disappeared abruptly. And its last captive specimen died in Cincinnati Zoo on 21 February 1918.

This bird of about 13inches (33cm) length had green plumage with a yellow head. Their habitats were old-growth forests along rivers and in swamps.

“Many endangered species have been sequenced and what seems to be a pattern is that when populations are small and declining for a long period of time, this leaves some signals in their genomes that can be recognised,” co-author Carles Lalueza-Fox, from the University of Barcelona, explained.

“Even if you have a single specimen, as here, we have a genome from the father and a genome from the mother; two copies of each chromosome. If the population has been small for thousands of years, these two copies will be very similar to each other and over long stretches sometimes they will be identical.”

As Dr Lalueza-Fox explained, when a population is large, genetically, the two chromosome copies will be more different. Indeed, the same thing the team found in the Carolina parakeet (Conuropsis carolinensis).

“The inference is that this bird was not subjected to a very long demographic decline for thousands of years, it was something very quick,” the University of Barcelona geneticist explained.

Dr Lalueza-Fox noted that the Sun Parakeet (Aratinga solstitialis), which is the closest living relative of the extinct bird, is native to South America, and has much less genetic variation.

However, the precise mechanism of the extinction of the Carolina parakeet remains mysterious.

There is the role of deforestation, along with hunting and trapping, in its demise. Other factors may include disease and even competition with non-native honeybees.

The birds were gregarious and gathered in large, noisy flocks. They would return to the locations of dead or dying birds, making the wholesale slaughter of flocks much easier for hunters, contemporary observers noted.

John James Audubon, the American naturalist, had commented on the declining numbers of birds in 1832. Early 20th Century, the birds had disappeared from the wild.

The birds also had a genetic adaptation to the toxic diet, the signs of which were found by the researchers. The Carolina parakeet liked to eat cockleburs, a coarse flowering plant containing a powerful toxin called carboxyatractyloside.

And there are also records of cats that ate Carolina parakeets being found dead due to the toxin accumulated in the bird’s tissues.

The two proteins known to interact with carboxyatractyloside gone through the genetic changes that could underlie a dietary adaptation to the poison, researchers uncovered.

There is one target for birds’ de-extinction, the scientific discipline, which gives re-birth to lost species bringing them back from the dead.

To make it look like its extinct relative, one way might be to take the Sun parakeet and use genome editing for modifying its DNA code. But unless there are similarities between the two species, this will be far from straightforward.

“If we compare both genomes, we can easily see there is a list of several hundred protein coding genes that have changes, that also seem to be functionally important,” Prof Lalueza-Fox told BBC News.

“It’s an enormous task. But even if we wanted to do that, as far as I know, nobody has been able to clone a bird… nobody knows how to modify something before it becomes an egg.

“If anything, this genome illustrates the enormous difficulties behind the de-extinction ideas. I am not saying it’s impossible, but it is incredibly difficult.”

The last captive Carolina parakeet died after four years, the last passenger pigeon had died but in the same cage. The rapid expansion of people across the United States over the 19th Century is the reason behind the decline of both birds.

After a journalist discovered a specimen was held in a private collection in Espinelves of North-Eastern Spain, the genome-sequencing project began. The stuffed bird had been acquired by an ancestor of the current owners.

The study has been published by the journal Current Biology.