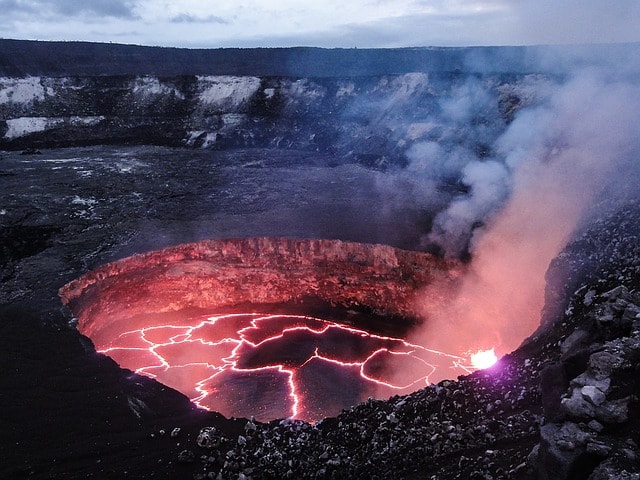 From space, the earth looks peaceful. However, what goes on underneath can leave you astounded. The underground of the earth is violently hot. The earth’s internal heat sometimes becomes excessive that it has to escape. The only way is through vents out to the atmosphere, a phenomenon known as volcanic eruption.

A volcano is a vent in the earth crust that lets out hot lava, gasses, rocks, volcanic ash and steam from a magma chamber underneath the earth’s surface. Volcanic eruptions predominantly occur in areas with vibration activities or weak zones, for example, where the continental plates of the earth pull apart or collide. It also occurs where the earth crust constantly melts.

A volcano resembles a mountain, although it’s nothing like a mountain. A mountain, by definition, is a huge natural rise of the surface of the earth, similar to a large heap of sand. A volcano, on the outlook, is like a huge heap of sand; only the heap is a combination of lava, dust, ash, and other compounds that have piled up over time.

When that lava cools down, it becomes solid and forms like a mound-like cone. In fact the mountain that we see today are nothing but solidified lava from previous volcanic eruptions.

It is said that through volcanoes are earth’s way of renewing itself. This may be the case or not but volcanoes are definitely one of the most eminent features of nature. They are reason to creation of beautiful places like Costa Rica, Hawaii chain islands, Nicaragua and are spectacular display of magnanimity of nature. But what gives rise to these magma spewing colossal figures.

How do Volcanoes Form?

The earth consists of three main layers. The outer crust that we live on. Scientists estimate that it’s approximately 1800 miles deep. The next layer is called the mantle, which is composed of molten materials and gasses. Molten materials are basically solids that have been converted into liquid due to extremely high heat. The collective name for these molten rocks and gasses is magma.

Magma is a liquid composed of numerous fragments, crystals, and gasses that include silicon, oxygen, aluminum, manganese, iron, and magnesium. When they are forced out onto the surface, they cool off and turn into igneous and magnetic rocks. The outer core mimics a ball of boiling metals about 4000 degrees F. to 9000 degrees F. The degree of heat in the outer core prompts all metals in it to be in liquid state. It’s rich in melted metals iron and nickel.

A volcanic eruption is likely to occur when pressure builds up in the mantle. In the course of an eruption, molten materials surge out through the vents in the earth crust to the surface. It’s important to note that molten rock is referred to as magma when it’s still underneath the earth’s crust. When it gushes out to the surface during an eruption, it’s known as lava.

Volcanic eruptions can occur in the form of lava fragments skyrocketing into the atmosphere leading to heavy clouds of lava. Some lava eruptions are non-violent and flow gradually from other surrounding vents and heap in areas around. Loose particles of ash are also rocketed into the atmosphere, and due to their light nature, they are carried along by strong winds.

Lava emitted from underneath the earth’s crust is approximately 2, 200 degrees Fahrenheit. When it shoots out of the vent, it is usually red hot, but turns dark when it cools. Lava loaded with silicon mimics honey and flows gradually from vents.

They are sometimes known as stratovolcanoes. They contribute to some of the most unforgettable mountains including Mount Fuji, Mount Cotopaxi, and Mount Rainier. These kinds of volcanoes consist of vents that well up from underneath the crust to the surface of the earth. They might encompass a network of vents, with lava surging through walls. With the collection of materials being discharged, they have the capability to grow high up. Composite volcanoes have the capacity to erupt violently.

They are considered the simplest kind of volcano. Cinder cone volcanoes occur when blobs and particles of lava are forced up through a volcanic vent. The eruption blows the lava into the air violently. The light particles are carried away by the wind. The heavy ones fall back around the volcanic vent. When this phenomenon continually occurs, an oval shaped or circular cone builds up. The top of the cone forms a bowl-shaped crater. These kinds of volcanoes rarely grow more than 1,000 feet above their surroundings.

As the name suggests, they look like shields from space. Lava emanating from shield volcano is characteristically thin, which means it’s able to travel long distances down the slopes of the volcano. Shield volcanoes build up gradually for a long time, experiencing numerous eruptions and forming layers during the period. These kinds of volcanoes do not erupt violently like the Cinder cone volcanoes. Hawaii is a classic example of an area where shield volcanoes are prevalent.

Lava domes, also known as volcanic domes, result from small quantities of lava, which are a lot thicker and unable to flow for long distances. Lava emanating from volcanic domes only stacks up over and near the vent. The dome increases in size as a result of the swelling of lava within. The mountain grows up from materials surging out from the sides of the growing dome. Lava domes have a history of violent explosions, emitting vast quantities of ash and hot rock.

Volcanic eruptions are great spectacles to watch. Eruptions exhibit the ability and strength of nature to carve up the earth in a remarkable way. But aside from the great spectacle, they have far reaching effects. The negative and positive effects of volcanoes are highlighted below:

The lava from volcanic eruptions creates beautiful landmarks when they cool down. The glittering sceneries attract tourists, bringing substantial income to the area.

The ash and lava deposited during volcanic eruptions eventually break down to give valuable nutrients to the soils nearby. This enriched soil is good for agricultural activities.

The extreme heat and activities underneath the earth crust, near a volcano, can present opportunities for generation of geothermal power.

When a volcano erupts, gasses such as carbon dioxide, carbon monoxide, sulfur dioxide, hydrogen sulfide, chlorine, fluorine and so on are released into the atmosphere. These gasses pollute the air and make it difficult to breathe. Also, the ashes released during volcanic eruption can lead to visibility problems.

Airplanes bear the biggest brunt of volcanic eruptions. The ash released due to eruptions can take a toll on the airplane engines. Pilots who have flown through a volcanic eruption have reported loss of power, and when they tried to initiate the throttle, the engine got hotter. This could be catastrophic if remediation is not done in time. It could also bring extraordinary maintenance costs to the airline company.

Volcanic eruptions can have a catastrophic effect on nearby towns and cities, although it will very much depend on the magnitude of the explosion. The ashes picked up by the wind could be directed to towns and cities causing respiratory problems, pollution, injuries or even death.

Nearby populations can be forced to abandon their homes if the lava flows for long distances at high speeds. High magnitude volcanoes can even cause deaths, for instance, the 1902 Santa Maria volcano (Guatemala) eruption killed about 1500 people including animal and bird species.

Lava flowing for long distances at high speeds can reach roads and railways causing serious destruction. This may result in cutting off of these vital transportation systems.

Although volcanoes have negative impacts, they can bring a plethora of benefits to the local community. For example, they can create one-of-a-kind tourist attractions and help project positive image of the region. Valuable minerals have also been discovered as a result of volcanic eruption, for example, nickel in Hawaii volcanoes, which has fetched billions of dollars.

Before we get to that we would have to get a briefing on the structure of planet Earth. The interior structure of earth consists of a core which is divided into inner and outer core, followed by highly viscous mantle and lastly the solid crust. The inner core is solid whereas outer core is liquid and so is mantle though a fact to be noted is that the viscosity of outer core is higher a lot higher than the viscosity of the mantle. Due to high pressure and heat the mantle is in viscous liquid state and not solid.

Tectonic Plates and Formation of Volcanoes

On many occasions these tectonic plates are on a collision course and when such an event occurs due to extreme pressure one of the plate’s slides over the other. One of the tectonic plates is forced into the mantle and other rise above the other one. Due to the extreme pressure and heat in the mantle the solid tectonic plate melts and rock complete melt and forms what is known as magma. This molten material rises due to many reasons such as releasing of heat and buoyancy tries to escape and makes it ways through the crust.

Most the time but not necessarily always the molten material or magma makes its way through the earth surface through the cracks and exert pressure to escape. When this magma reaches surface, it gives rise to volcanoes. Magma reaching the surface of the earth is referred as lava. Over the period of time through constant eruption, layer by layer of lava builds up a volcano.

The eruption occurs in the through the weak portions on the earth surface through which magma is able to makes it way out. This overall process takes place as a form of pressure and heat release from within the earth. Such magma outburst may be accompanied by strong earthquakes. You can get more information of the various types of lava flow and there resultant volcano.

There are numerous factors which determine the flow of the lava, the course taken by it and the type of volcano formation that might occur.  Such factors include the pressure in the given area, the mineral content, the amount of gas and molten material, all are contributing factors in an eruption and as well as formation of a volcano. There are many categories of volcanoes including Stratovolcanoes or composite volcanoes, Lava domes, Cryptodomes, Volcanic cones, Shield volcanoes and many more.

Another popular theory is the Hot Spot theory which also explains the formation of volcanoes. According to it there are various Hot spots situated beneath the earth surface and crust and are centers through which earth constantly spews out magma and other molten material and gases. Since the these hot spots are situated below the tectonic plates and volcanoes are on top of it, over the period of time the volcano drifts away from the point of hot spot and becomes inactive. This cycle continues and constantly makes new volcanoes. Yellow stone volcanoes are good examples of such scenarios.