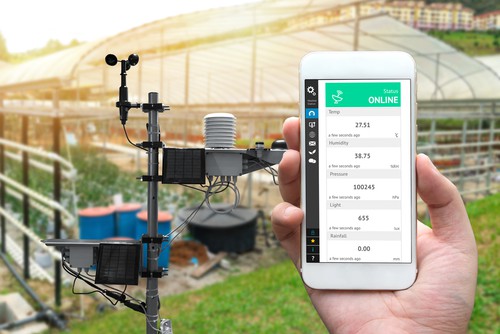 The advancement of technology have enabled us to predict the weather conditions at a specific period. One of these technologies that you can privately own is a home weather station. Weather stations have become essential to both public and private industrial establishments due to their ability to predict weather.

Parts of a Home Weather Station

It’s imperative to know that home weather stations are battery-operated devices which are designed to collect and record data on the weather conditions in its environment. They can’t change the weather but only tell you what can happen next in your area.

To know how these devices work, you first need to determine its parts. Depending on the brand and manufacturer of your weather station, they contain around five parts.

The thermometer is the most basic part of a weather station and determines the current ambient temperature. It comprises of temperature sensors that send information to the display of the device and gives you a reading, in degrees Celsius (oC) or degrees Fahrenheit (oF). Most thermometers have a range of 30 meters (100 feet), and some weather devices have two thermometers for outside and inside.

There are three types of temperature sensors that weather stations can use.

Barometers are devices that measure the atmospheric pressure of the ambient air in a small area. These devices are used to determine how bad the weather can get in your area. Lower pressure means it’s most likely that rain and strong winds are coming your way.

Barometers in weather stations use electronic pressure sensors that create electrical signals when a strain on the sensors are detected. These strains are then interpreted to the pressure value, which you can then read on the display. Make sure to read the manual, so you don’t interchange the barometric reading with other readings.

See also  How Many Amps Does a Phone Charger Use? (Explained)

Digital hygrometers use capacitive sensors or capacitors, which has moisture absorbent materials attached to it. Capacitors change their values of capacitance based on the dryness or wetness of the materials. These changes are then recorded and interpreted as humidity level readings on your display.

There are three types of anemometers that weather stations can use.

Rain gauges are devices that measure the amount of rainfall in a particular area at a specific period of time. Some weather stations don’t include this device, and most of them differ in the technologies used. There are two ways that rainfall is measured.

Features of home weather stations vary greatly from one manufacturer to another. It’s best to read the manuals first, and research about the product before buying or using it. There might be features that are more complex than others that are too complicated for you to understand. You might end up damaging the device than using it for your benefit.