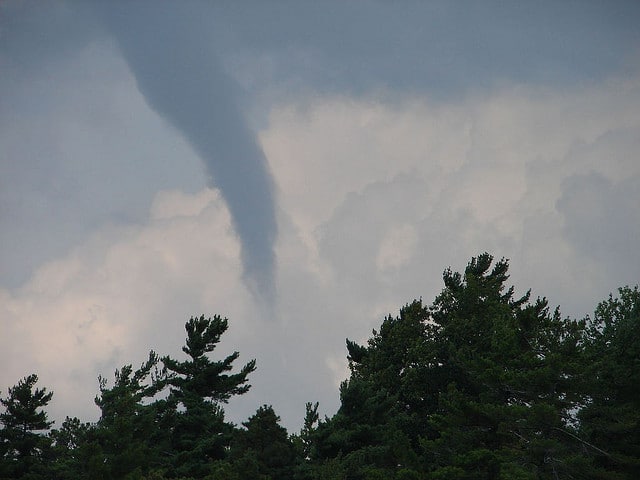 A tornado is a strong, turbulent column of air, moving fast and keeping in contact with the earth’s surface and a vertically formed cloud carrying dense water vapors, called the cumulonimbus cloud. Commonly, the tornadoes are shaped like a funnel, but the shape and structure can vary according to the climatic conditions. The bottom end of the vortex is surrounded by a cloud of dust and debris. A tornado can occur anywhere on land expect Antarctica. Read more about types and cause of tornadoes here.

Tornado speeds can vary from 110mph to 300mph in extreme cases. They are, on an average, about 75m tall and can travel about a few miles before depleting completely. Tornadoes also occasionally occur in south-central and eastern Asia, northern and east-central South America, Africa, North West and South East Europe, West and South East Australia, and New Zealand.  Most commonly, tornadoes are observed to occur in the Tornado Alley, ranging from the states of Texas to Iowa, in the United States.

The most common types of tornados are the single supercell F1 type. The letter “F” is used to denote the Fujita Scale, depending on the magnitude of the damage cause by the tornado. F0 being the least amount of damage and F6 being the maximum. For the detection of tornadoes, a Pulse-Doppler radar is used which collects data based on the velocity and reflectivity of the air of the surroundings. Learn more about facts related to tornadoes.

Tornadoes are formed due to large super cells. Super cells are nothing but a huge cluster of thunderstorm clouds. A simple explanation to its formation is as follows: warm air rises up as it has a low vapor pressure and cold air drops down because of its high vapor pressure. Due to this, the warm air in the end forms a vortex and forms a funnel cloud, otherwise known as a tornado. A characteristic green color appears in the sky when a tornado is completely formed and ready for destruction.

The formation of tornadoes is followed in a set pattern of simple steps.

Firstly, when the thunderstorm approaches, the wind direction speed changes in the upper area of the atmosphere and causes an invisible horizontal spinning effect in the lower region.

Secondly, the horizontal air is tilted to vertical because of the rising hot air’s updraft. It eventually forms into a spiral with diameter ranging from 2-6 miles of rotating air.

Thirdly, a rotating wall cloud originating from the center of the storm (eye of the storm) is formed as the base cloud. This region is rain-free. Just moments later, a tornado is formed and it starts revolving around violently at high speeds and cause havoc in and around the environment.

Lifetime of a Tornado

Every tornado has a definite lifetime. The down pouring rainfall drags a rapidly descending region of air known as the rear flank downdraft. It drags the super cell’s Meso cyclone (area of organized rotation) to the ground with it.

As the meso- cyclone approaches the ground, it begins to take in the cool moist (condensation) air along with it. This makes the funnel to appear. As the funnel descends, RFD also reaches the ground. This creates a gust front, which can be very destructive, from the tornado. The funnel cloud becomes a tornado within minutes of the RFD reaching the ground.

The power source of a tornado is the warm, moist air which is in abundance. It stays in this phase for about 1-2 hours and evidently, this is the most destructive phase of the tornado. The RFD, now at this point, is a cool flow of air and it wraps itself around the tornado cutting off its source of warm air.

The RFD wraps itself around the tornado completely now and the vortex begins to weaken. Due to the choking, the tornado has now dissipated. The storm has now been deflated but the winds can still have high speeds. Sometimes, new tornadoes can generate from the meso-cyclone of the previous one.

Tornadoes are a work of creation and should always be stir-cleared away  as you never know how damaging the consequences can be.