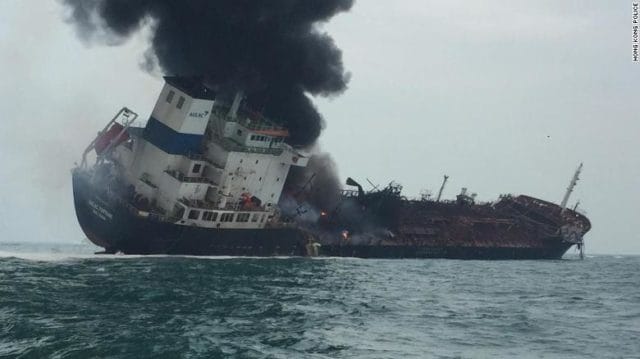 An oil tanker blazed with fire in the south of Hong Kong’s one of the main islands. A police spokeswoman told CNN about the fire that broke out 11:30 a.m mid-morning aboard a vessel that was transporting kerosene oil near Lamma Island. As a result, a huge cloud of dark smoke puffs out into the air.

According to ship tracker Marine Traffic, it was Vietnamese-flagged 11,000-ton tanker titled ‘Aulac Fortune’ which was on the way from the southern Chinese port of Dongguan to Hong Kong.

The tanker was reportedly carrying oil as well as chemicals. Both ship-tracking websites VesselFinder and Marine Traffic classified the ship as an “oil/chemical tanker.”

Hong Kong Police posted in a picture that the tanker was seen listing sharply with a large cloud of black smoke coming out from its middle and flames flickering on the deck.

According to the spokeswoman, as the fire engulfed the ship, 23 of the 26 crew members on board jumped into the water. Marine police boats rescued these people who are all alive. However, one dead body pulled out of the water, and the other two are still missing.

As per the Hong Kong government statement, firefighters used four jets to put off the blaze. There were also three fire motor boats to tackle the blaze as said by a government spokesman. They extinguished the fire that appeared extensively, however, the ship got damaged severely. A large hole framed by metal could be seen on one side of the vessel twisted outward from the deck. That confirms an explosion before the fire broke out.

Liquid found pouring out from the affected area, but rescuers were unsure whether it was fuel or just running off water used for the firefighting. There was no trace of a significant spread of oil on the water near the vessel.

CNN reports on the basis of an email from Hong Kong’s Environmental Protection Department about an immediate deployment of cleaning vessels to the location on standby. However, oil spillage not observed so far.

Two crew members one with burns, the other with a leg injury rushed to hospitals in central Hong Kong, said the government spokesman.

Michael Kwok, a speedboat driver, told AFP “I felt my boat shaking. The tremble came from the sea,” and while out on his boat nearby, he heard three explosions.

Residents of Lamma and Lantau Island nearby heard a loud bang and reported shaking of their windows and other furniture.

Deb Lindsay, a Lamma resident, said: “My windows shook really badly but (there) was no wind.” He added, “I thought there had been an earthquake!”. Lindsay also reported about three bangs; the first one was “really big one” and after few minutes two smaller apparent explosions.

Another Lamma resident, Tracy Lockwood, said that while she was teaching across the Lamma Channel in Aberdeen, the southern part of Hong Kong island, she felt a “big wallop on the windows.” She explained, “I thought it was just a weird big gust of wind, but it must have been (the) explosion.”

Some parts of southern Lamma and Hong Kong’s waters are considered as a protected nesting site for highly endangered green turtles, and critically endangered white dolphins. Both are under pressure due to land reclamation activity and pollution. In the past, Hong Kong struggled much to deal with pollution and debris on Lamma’s beaches flooded from the sea. Residents expressed concern about the flooding of the island’s coast with oil due to the tanker fire.

See also  10 Years is What We have To Help Protect Our Planet's Biodiversity Before The 6th Human-Triggered Mass Extinction Hits, Warns UN Agency

Usually, oil spilled at sea spread out on the sea surface and moved with current and wind, and during this period a number of physical and chemical changes occurred. These changes collectively termed as weathering. The spilled oil ultimately get eliminated by the marine environment through the long-term process of biodegradation.

As per the International Tanker Owners Pollution Federation Limited (ITOPF), non-persistent oils, like kerosene, “will dissipate rapidly through evaporation.” Still, the ITOPF notes that non-persistent oils may cause at high concentrations, “acute toxicity to marine organisms.”