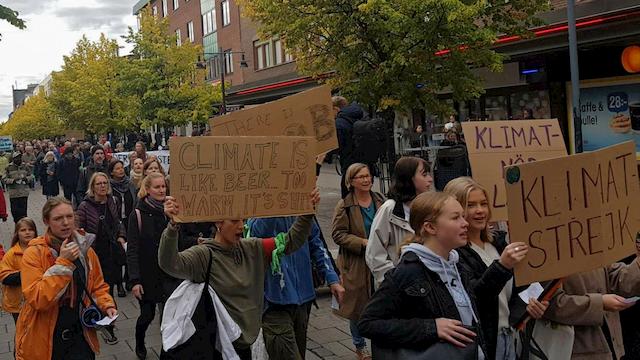 A fresh wave of climate strikes by hundreds of thousands of people takes place across the continents around the world to demand urgent climate action on the escalating ecological emergency.

Millions walked out of schools and workplaces and got united across timezones, cultures, and generations to join the biggest climate protests ever in history before a special UN conference in New York last week.

Another huge turnout was expected on Friday by the organizers, with demonstrations planned from Canada to the Netherlands, Sweden to Morocco, and Italy to India.

“This week was a demonstration of the power of our movement,” said a spokesperson for the FridaysForFuture group which has helped coordinate the demonstrations. “People power is more powerful than the people in power. It was the biggest ever climate mobilisation and it’s only the beginning. The momentum is on our side and we are not going anywhere.”

On Friday, record numbers of protesters were reported to have taken to the streets in New Zealand. According to Greta Thunberg, the teenager who inspired the school strike movement with her solo protest outside the Swedish parliament last year, 3.5% of the country’s population was taking part.

May Boeve from 350.org, which has helped organize the demonstrations, said: “We will keep fighting until the politicians stop ignoring the science, and the fossil fuel companies are held responsible for their crimes against our future, as they should have been decades ago.”

Friday morning, the government called on to declare a climate emergency through an open letter signed by 11,000 New Zealanders delivered to parliament – following the lead of numerous councils of the country.

“Our representatives need to show us meaningful and immediate action that safeguards our futures on this planet,” Raven Maeder, the School Strike 4 Climate national coordinator, said. “Nothing else will matter if we cannot look after the Earth for current and future generations. This is our home.”

Another big demonstration in Latin America from Mexico City’s vast Zócalo Square to the Plaza de Mayo in Buenos Aires is also a part of the Earth Strike events.

From 6 pm, Plaza Italia in Santiago, Chile, will be flooded with demonstrators as per the activists while protests will be staged in cities like Brazil, Bolivia, Ecuador, and Paraguay around the rim of the Amazon rainforest.

The environmental movement on Bogotá’s high Andean plain has faced a severe crackdown. Numerous activists being killed reaching the figure at 734 deaths in the first seven months of 2019 as per peace and development thinktank Indepaz. In July, protesters throughout the country pleaded for putting an end to the violence.

Susana Muhamad, the activist who was planning to march past the offices of the country’s largest petroleum company, Ecopetrol, at midday, said, “We want to keep fracking out of our country and demand an immediate change towards decarbonization.”

In Argentina, over 30 protest events have been planned where the participants will be marching across the capital, starting from Plaza de Mayo to the seat of the national congress.

Among them will be Stephanie Cabovianco, a 30-year-old activist from Buenos Aires. “There are no outright leaders coordinating our movement in Latin America – and that’s a good thing,” she explains. “This is a fight led by young people, and its structure should be as horizontal as possible.”

In some countries, protesters have adopted extraordinary ways to convey their message to resistant authorities or the indifferent public.

For 29 weeks MakichyanArshak has been staging a solo school strike in Pushkin Square, Moscow.

“In Moscow it is almost impossible to get permission for a mass demonstration so we protest in a queue. One person holds a poster for five minutes, then hands over to the next person who is waiting nearby. That way, we don’t have any problems because it is a series of solo strikes rather than a group gathering,” said the 25-year-old violinist, a graduate of the Moscow Conservatory.

The strikes show the growing awareness among people around the world and anger of the severity and scale of the climate crisis.

Thunberg condemned world leaders at the UN earlier this week, for their “betrayal” of young people as they failed to deliver ambitious new commitments at New York summit to address catastrophic global heating.

The climate activist told governments: “You are still not mature enough to tell it like it is. You are failing us. But the young people are starting to understand your betrayal.”