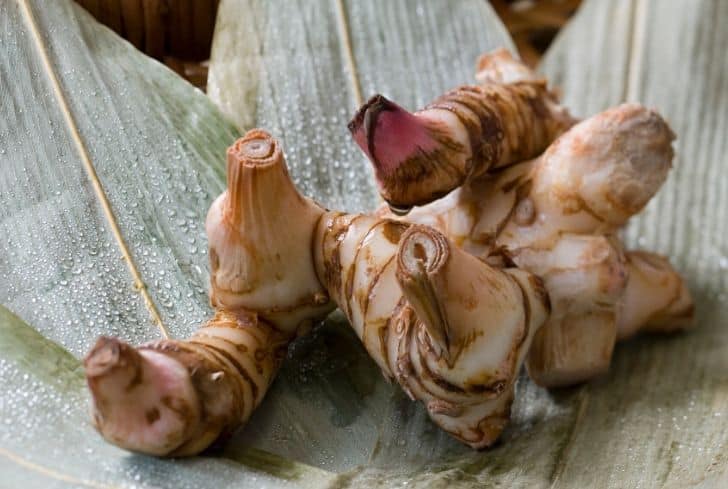 Thai cuisine lovers may be familiar with that zingy, spicy, citrus-like herbal notes in soups and curries. It’s not ginger, it’s galangal.

Also known as Laos root, Kah, Galanga or Siamese ginger, galangal (Alpinia galangal) is a member of Zingiberaceae. Being from the same family as ginger, it looks similar but tastes different. Galangal has a sharp peppery, almost citrusy flavor, while ginger is fresh, pungently spicy, and not-so-sweet at all. The skin of galangal is smoother and paler than ginger and its flesh is much tougher. It can’t be grated like ginger can, but instead must be crushed or sliced finely before use.

Galangal: A Spice & A Cure

For thousands of years, Arabic and Asian healers prized galangal as food and medicine – both for good reason. Thanks to the food trade, galangal found its way to the western world and now, is used all over the world.

That said, let’s take a journey to explore the tropical rhizome and exactly how it can benefit your health.

Galangal has a bounty of antioxidants

A 100g serving of raw galangal contains just 71 calories, a little more than 6% protein, no fat and 85% carbs. Even so, galangal is chock full of powerful flavonoids like Alpin, Kaempferide, galangin-3-methyl ether, and galangin. The rhizome also contains phlobaphanes, galangol, bassorin, gadenens, tannins, eugenol, and kaempferide.

As for vitamins and minerals, it is rich in vitamins A and C, iron, and sodium.

Top 13 Reasons To Use Galangal

In addition to helping to ward off premature aging, the anti-inflammatory power of galangal is tied to calm inflammation throughout the body. The anti-inflammatory gingerols play a role in inhibiting prostaglandin synthesis, which leads some experts to believe that it may help arthritic patients.

A 2014 study found that galangin, a flavonol in lesser galangal can elicit an anti-inflammatory effect by inhibiting ERK and NF-κB-p65 phosphorylation. Inflammation is common pathogenesis of many chronic diseases including rheumatoid arthritis, inflammatory skin conditions, and bowel disease,

Galangal delivers good amounts of Vitamin C and more than a dozen antioxidants including alpine and galangin, making it an immunity booster. What’s more, research showed that 1′S-1′-acetoxychavicol acetate (ACA) isolated from the rhizomes of Alpinia galangal inhibits replication of HIV-1.

3. It increases Sperm Count and Motility

In the Middle East, Galangal is used as an aphrodisiac, and South-East Asians often use Galangal in menstrual disorder treatments. More research on this topic is needed, but a 2014 study revealed that ethanolic extract of A. galanga significantly increased rat spermatogenesis.

Additionally, it has been shown that a daily supplement of pomegranate juice and galangal root increases sperm motility three-fold.

Galangal is a member of the Zingiberaceae family, which also includes ginger, turmeric, and cardamom. This group of plants contains phytochemicals linked to cancer prevention—thanks to their antioxidant and anticarcinogenic properties. Galangin, a flavonoid found in galangal, has been shown to combat chemical genotoxicity. Galangin has also been linked to apoptosis, the self-destruct program the body uses to kill off dysfunctional cells. A study by Ha TK et al found that galangin induces apoptosis of HCT-15 and HT-29 human colon cancer cells.

Scientists say galangal root is effective against gastric, skin, pancreatic, breast, and liver cancers. According to a 2014 study, an aqueous extract of Alpinia galangal possesses an anti-proliferative effect on the human gastric tumor (AGS) and L929 cell lines.

If that’s true, people don’t have to endure the uncomfortable side effects of chemo in the future.

5. Galangal is a Natural Antimicrobial

Studies show that the essential oils derived from dried and fresh galangal rhizomes can inhibit bacteria, yeast, fungi, and parasites. Terpinen-4-ol, one of the monoterpenes in the galangal essential oil, possesses antimicrobial activity against Trichophyton mentagrophytes.

6. Galangal is Good For Skin

We know that antioxidants support skin health, but galangal may actually help turn back the clock when it comes to skin aging. In an in vivo study published in Costetics and Toiletries, scientists state that galangal extract boosts hyaluronic acid production. Surprisingly, the participants reported a reduction in smile lines, increased skin radiance, and skin density.

Galangal also soothes away eczema, burn and itchiness, and fungal infections. With a healthy dose of vitamin C, galangal helps skin rejuvenation as well. Nice perk for spice with so many additional benefits!

In Ayurvedic medicine and other Asian alternative medicine, galangal was used to help with gas, cramping, constipation, and even stop hiccups. Indonesians consume freshly grated galangal with salt on an empty stomach to ease digestive issues.

Some of the nutrients and ACA in galangal have been linked to a healthy brain and better cognition, plus protection against depression. Evidence also shows that by reducing beta-amyloid plaque deposition in the brain, this spice can slow or prevent the onset of neurodegenerative disease. Animal research has also confirmed Alpinia galangal’s anti- anti-amnesic effect.

Aim to make it a staple if you wish to hold back your memories or to prevent cognitive decline.

Galangal has been used for thousands of years as a natural treatment for cold, cough and sore throat around Asia. Galangal tea aids in expanding the lungs and loosening up phlegm thanks to its expectorant properties. The antispasmodic effect of the spice reduces the sputum, as well as dilates the bronchioles. Galangal extract also helps to control and soothe asthma and acute respiratory distress syndrome thanks to its anti-inflammatory effect.

11. It Can Boost Cardiac Health

Galangal protects your heart in several ways. The spice has been shown to improve cardiac circulation, decrease LDL cholesterols and triglycerides, as well as anti-inflammatory. Studies show that galangal can reduce cardiac contractions and protect from fainting and heart attack. Dietary fiber reduces the risk of heart disease by binding to circulating cholesterol and removing it from the system. Galangal has a good amount of fiber, making it a heart-friendly spice.

12. A Must-have in Your Beauty Arsenal too

Galangal is a powerhouse of antioxidants, fatty acids, vitamins, and minerals. It even comes with antiseptic properties that mean you’ve got your one-stop solution for everything from dry scalp, dandruff, hair thinning, split ends, and more. Galangal juice (or mask) works like magic for promoting blood circulation on the scalp.

Galangal root is a must-have in your beauty regimen. Being a powerful antiseptic, it gets under the skin to kill acne-causing bacteria. And the best part is, it does it without irritating the skin.

Antioxidants in the root tones the skin fights off lines and wrinkles, improves skin elasticity and more. In folk medicine, galangal was used to soothe and hasten burn wounds.

13. May Help With Nausea

Galangal has long been a popular remedy for nausea, often results from morning sickness, motion sickness, and seasickness.  In addition to the traditional use for nausea, modern science also backs up these claims.

More specifically, evidence points to gingerol, the active ingredient in galangal and other Zingiberaceae members. An animal model showed that gingerol can increase gastrointestinal transportation and relax the muscles, which can relieve nausea and vomiting.

Any Down Sides to Galangal?

Research reveals little or no information regarding galangal side effects. Actually, galangal is classified as a hypo-allergenic food, so chances are good that you won’t experience skin or gut allergies.

As mentioned, galangal may increase stomach acid production. If you have any gastrointestinal diseases, it’s probably best to avoid this root.

Like most herbs, avoid overdoing it if you’re pregnant or under medication.

Ways to Use Galangal

There are many ways to use galangal roots; for soups & curries grate or mince it for a vegetable stir fry. You can also add thin, whole slices to give that strong earthy flavor, but remove the chunks before serving as its harder and inedible.

Galangal powder is popular nowadays; use it to spice up the winter soups. 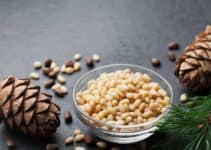