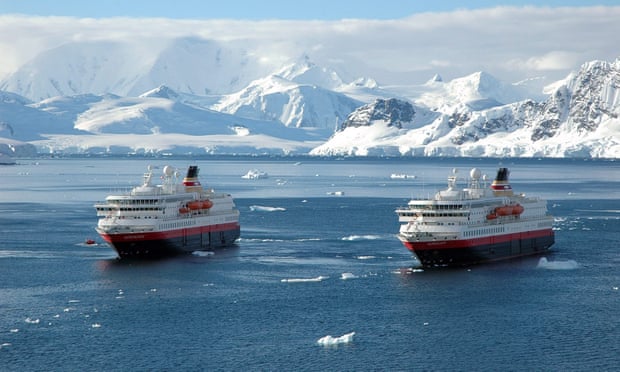 Norwegian Company plans to power its cruise liners with biogas produced from fish leftovers. For generations cruise liners have relied on the traditional form of fuel, also known as fossil fuels, to navigate through the rough waters surrounding the Nordic coastline. But due to rising environmental concerns and rapid technological developments, there is a need to change the way these gigantic container ships are powered.

According to a research conducted by marine pollution analysts in Germany and Brussels, a single cruise liner ship would probably burn at least 150 tonnes of fuel a day, and emit more sulphur than several million cars, more nitrogen dioxide gas than all the traffic passing through a medium-sized town and more particulate emissions than thousands of London buses.

In a new initiative to use green energy for these polluting cruise liners, Hurtigruten has decided to use waste fish parts to power its ships. The leftovers of fish processed for food is mixed with other organic waste in order to generate biogas. This biogas will then be liquefied and used in place of fossil fuels by the expedition cruise line Hurtigruten.

Hurtigruten, which is a 125 year old company based in Norway, aims to convert at least 6 out of its fleet of 17 vessels to use biogas, liquefied natural gas – a fossil fuel that is much cleaner than many traditional fossil fuels. Being a pioneer of the Shipping industry, Hurtigruten is also banning single-use of plastics in an effort to be more environmentally sustainable. It operates cruises in the Arctic and Antarctic which are both highly sensitive environments.

In an interview with leading newspaper “The Guardian”, Daniel Skjeldam, the chief executive of Hurtigruten, said: “Norway is a large shipping nation, but fishery and forestry are also large sectors. They create jobs and produce income, but they also produce a lot of waste products. The steady access to high volumes of organic waste gives the Nordic countries a unique position on the biogas market. We are pushing for more innovation, more investment. I believe we have just seen the beginning of what in a few years will be a huge sector.”

Biogas, which is primarily methane and carbon dioxide along with small amounts of hydrogen sulphide and moisture, can be generated from most forms of organic waste by speeding up the natural decomposition process to capture the methane produced. Organic waste is generated by most of the food processing industries but is frequently disposed of in a landfill, where it contributes to greenhouse gas emissions as it decomposes. The gases methane, hydrogen, and carbon monoxide can be combusted to generate usable energy that can be used for powering the ships.

Another promising alternative is to use large battery packs that will produce enough moving power for the cruise liners. The use of battery power for ocean-going transport is an early stage as building batteries powerful enough has been a problem to date. Advancements in battery manufacturing technology are making it possible to install batteries big enough to last a voyage. Keeping in line with innovations in the battery power technology, Hurtigruten is currently building three new hybrid-powered cruise ships in Norway that will have an estimated delivery in the next three years.

Hurtigruten is expecting an investment of more than 850 million USD for building the world’s greenest cruise line. The company’s vision is clearly visible which is to create a healthy pollution free ecosystem. According to Skjeldam, “sustainability will be a key driver for the coming era of shipping and the travel industry. Hurtigruten’s unmatched investments in green technology and innovation set a new standard for the whole industry to follow. Our ultimate goal is to operate our ships completely emission free”.