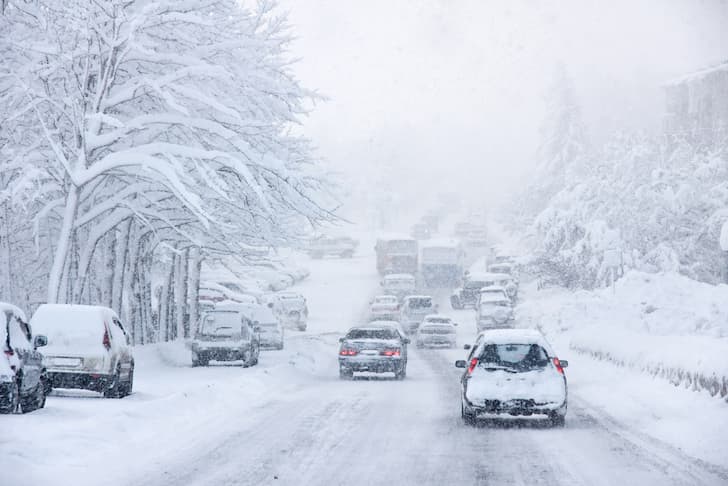 During extreme weather, a lot can happen, including strong and very dangerous winds. During cold seasons or winter, such extreme conditions result in what is called a blizzard. Blizzards can kill, cause traffic accidents and bring cities to a halt. This article discusses blizzards and gives more information on the same.

According to the National Geographic, a blizzard is a weather event that includes low temperatures, wind speeds greater than 56 kilometers (35 miles) per hour, and a large amount of falling or blowing snow that lowers visibility to 0.4 kilometers (0.25 mile) for a minimum of three hours. These weather conditions result in car accidents and people on foot can get lost. Additionally, these colder temperatures put people at risk of frostbite or hypothermia.

My favorite thing of all time is a New York City weekend when there’s a blizzard. Everything gets really quiet, and everyone goes to the movies and the park.

Once snowstorms achieve the aforementioned wind speeds, they are classified as blizzards. If the blizzards exceed 45mph (72km/h), there is near-zero visibility and the temperature is below 10° F (-12° C), it is considered a severe blizzard. Some intense blizzards can have wind speeds as strong as category one or two hurricanes. Snowstorms do not just develop into blizzards and for a blizzard to be declared, it has to attain these and other weather conditions.

How Do Blizzards Form?

1. Cold air (below freezing) is needed to make snow: The conditions have to be ideal for it to snow. The temperatures up in the clouds where snowflakes form, as well as down on the ground, have to be cold. If the air near the ground is too warm, the snow will melt on its way, changing from snow to freezing rain or just plain rain

2. Moisture is needed to form clouds and precipitation: There has to be enough air blowing across a body of water, like a large lake or the ocean, to blow up water vapor. Some vapor will evaporate into the air, creating the “lake effect snowstorms” and “Nor’easters” pick up so much moisture. Unfortunately, cold air cannot hold too much water vapor and does not make very much snow.

3. Warm, rising air is needed to form clouds and cause precipitation: warm air has to rise over cold air for a blizzard to form. Winds can either pull down cold air towards the equator from the poles and bring warm air towards the poles from the equator. When warm air and cold air are brought together, a front is formed and precipitation occurs. Alternatively, warm air can also rise to form clouds and blizzard snows as it flows up a mountainside.

4. Blizzards form: Blizzards are characterized by blowing snow, whipping winds and low visibility. However, for a snowstorm to be considered a blizzard, it has to hit three criteria:

If one or more of these criteria is not met, it is not a blizzard. However, if they are and they exceed, you have yourself a blizzard.

When a blizzard hits, it gets a lot of people, many of whom are still on the road driving. Blizzards have a severe effect as visibility is reduced drastically. It, therefore, might result in traffic snarl-ups that last for hours and even days. For those driving at higher speeds, they can end up crashing their vehicles, mostly onto other cars since visibility is at a minimum. This can result in serious injuries and even deaths. Medical emergencies, therefore, become difficult to attend to during a blizzard.

Spending time in a blizzard, especially unprotected or ill-prepared can lead to hypothermia, frostbite and even a freezing death. Skin left exposed to such severities could lose all sensitivity within minutes. These health conditions may affect a person, requiring immediate medical attention, which could be delayed by the weather itself. Not everyone could be well-equipped to battle a blizzard and as such, it is advisable to stay indoors during such extreme weathers.

Blizzards bring about strong winds in the cold weather. These winds could blow up houses, damage property and cause power lines to collapse causing people to go without power and warmth. Communication systems could also go down or be interfered with, disrupting emergency communication. The conditions last for several hours and sometimes days, leading to more people suffering.

4. Effects on food and water

With supply lines interrupted, and with traffic not moving, some people may end up without their usual supply of food and water. if power lines are disrupted, food in the refrigerator could also go bad, meaning the people will go without food for the duration of the blizzard.

5. Effects on the environment

Blizzards result in trees falling and plants dying. This damages forests, which then releases excess carbon dioxide, causing an imbalance in the local ecosystem, impacting plants and wildlife. The wet and damp conditions created by the extended blizzard periods could help some mod and fungi damage the environment by destroying plants and trees that provide food sources and are important to sustaining the local ecosystem.

If other plants and animals are killed during blizzards, there is a lack of food supplies for local animals and wildlife. Such an imbalance may force some animals to move away, resort to alternative means of acquiring food, or even die if they cannot feed properly.

Blizzards can contribute to a heavy accumulation of water vapor in the atmosphere, leading to greater rainfall, including heavy storms throughout the rest of the year. These storms raise water levels and impact plant and animal populations, depending on their severity.

There is a high risk of flooding following a blizzard. When the temperature starts to rise and melt the snow, it can melt at a faster pace than the ability of the land to absorb it.

1. Origins of the word: The term ‘blizzard’ was coined by an Iowa newspaper in the 1870s to describe a snowstorm. The term later became synonymous and widespread in the 1880s with dangerous snowstorms across England and the United States

4. The greatest blizzards recorded: The Great Blizzard of 1888 remains one of the most severe blizzards in the US. It lasted two days, saw up to four feet of snow falling in the states of Connecticut, New York, New Jersey and Massachusetts, and led to over 400 deaths. The same year, The Schoolhouse Blizzard saw children stranded in one-room classrooms and about 235 deaths in the Plains States from Texas to South Dakota. The deadliest blizzard in the world was the Iran Blizzard on 1972. As much as 26 feet of snow fell and caused about 4,000 deaths

5. If caught outside: If you are caught outside in a blizzard, do not wat the snow as it will lower your body temperature. Instead, melt it first. To increase your chances of surviving the frostbite, make sure you are hydrated and properly nourished. Make a fire where possible, and keep yourself and your clothes dry.

6. If caught inside: Blizzards can also disrupt your life even if you are caught inside. If you are in a vehicle, have your first aid kit near, as well as some food and water. Where possible, stay away from the highway to avoid other drivers crashing into you.

Also, have your jumper cables, road flares, tow rope ready, in case you get into an accident, your car breaks down or you are stuck in the snow. If you are inside your home, have your blankets, canned food, flashlights and extra batteries ready as blizzards may cut off your electricity, water, food and heating.

7. Blizzards are invited by special weather conditions: Blizzards do not just happen or develop at random. They appear when the jet stream pitches at an extreme southern angle. When the cold that comes from the north clashes with the warm air which is associated with the south, it gives birth to an unstable effect that triggers the fury of the blizzard.

9. Blizzard country in the US: Many blizzards pile up around the East Coast area. This is due to the East Coast being home to a type of storm called Nor’Easters, which are storms traveling up the East Coast of America. Moisture gathers from the Atlantic and dumps large accumulations of snow from Delaware to Maine. The Midwestern US and central Canada are often referred to as “blizzard country” because people there have experienced the dangers and inconveniences of snowstorms.

10. Rochester, NY: Rochester is the largest city with the most snow in the US, accumulating an average of 94 inches of snow each year. The city, therefore, knows a lot about blizzards

11. The Blizzard of 1996: This was one of the most severe blizzards ever recorded. There were 27 blizzards in the US during the winter of 1996, 80 people died in Pennsylvania alone, the federal government was shut down for nearly a week and nine states plus DC were put in states of disaster. The total property damage suffered ranged from between $600 million and $3 billion

12. The storm of the 20th century: The Storm of the [20th] Century took place in March 1993. It was iconic for its hurricane wind force and massive size. It stretched from Canada to mid-America and left some southern states under a foot or more of snow. In the end, the blizzard led to roughly 300 deaths and 10 million power outages.

13.The first federal emergency because of a blizzard: In 1977, the first blizzard was so severe, it was declared a Federal Emergency. It affected Southern Ohio and upstate New York, had deadly winds, and accumulated about 12 inches of snow over five days