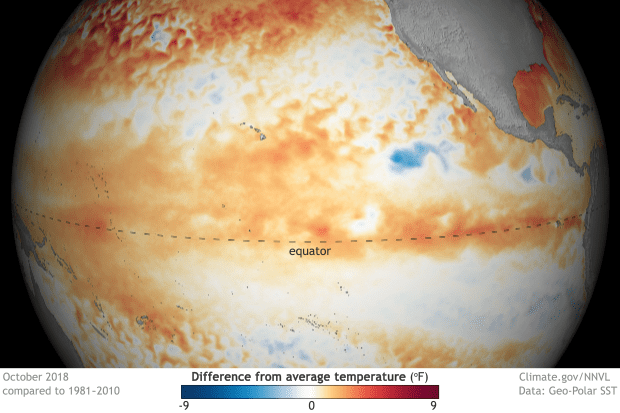 For those wondering what an ‘El Niño’ is, it is a term used in the environmental niche to describe a naturally occurring event that causes changes in the temperature of the Pacific Ocean, majorly influencing weather patterns all around the world.

The name “El Niño” (Christ’s child in Spanish) is widely used to describe the warming of sea surface temperature that occurs every two to seven years, mostly in the central-east equatorial Pacific. According to Earther, typically unusual warm, nutrient-poor water appears off northern Peru and Ecuador towards the end of December along with heavy rains in South America. El Niño also hits parts of Africa, Asia and Australasia causing droughts.

Recently, the United Nations’ World Meteorological Organization (WMO) announced that there is a hefty 75-80 percent chance of an El Niño occurring in 2019, which will most likely be developing by February. An El Niño could lead to widespread flooding as well as severe drought problems across different parts of the world in the months to come with sea temperatures peaking between 0.8C to 1.2C above average levels.

According to the Met Office, El Niño occurs due to strong interactions between the ocean and atmosphere which is usually connected with significant and long-lasting changes in the climate. It can adversely disrupt the way of life in terms of being a threat to infrastructure, agriculture, health, energy sector and most of all human life.

The consequences of El Niño may also combine with long-term climate change to increase global temperatures, so how will it affect nature? According to National Geographic, rise in sea surface temperatures causes the cool water to be pushed downward by warm water which blocks the nutrient-rich waters to come up due to which marine life is compromised. Although El Niño affects ocean, its most eye-catching repercussions are experienced on land.

In regions such as the Western United States, Central and South America the warm air and moisture produced by El Niño lead to increased storms, floods, rainfall, loss of life and property and also emergence of diseases such as malaria, which normally don’t occur in these parts. In South-East Asia and Australia, entirely opposite events occur.

These parts experience droughts, wildfires and colder ocean waters. In 1997-98, the world experienced the biggest El Niño in history which is known to cause an estimated 2,100 deaths and $33 billion worth of damages. Temperature rose to around 108 degrees Fahrenheit in Mongolia, flash flooding from California to Mississippi and tornados in Florida occurred during that period.

The announcement by the WMO is a warning to everyone around the world as people are informed of what an El Niño brings with it, last time this phenomenon occurred in 2015-16 people were left devastated. During that time, extreme-weather related events like droughts, fires, floods and coral bleaching unfolded as El Niño surfaced, pushing atmospheric concentrations of carbon-dioxide to reach 400 parts per million for the first time making 2016 to be the hottest year recorded in history, reports EcoWatch.

According to BBC, the WMO believes that this time around El Niño will not be as powerful as its predecessor but changes in rainfall and temperature patterns around the world are still expected which can lead to changes in agricultural and food security sectors, management of water resources and public health.

The United Nation’s food and Agriculture Organization (FAO) has issued a report listing countries that could potentially suffer from food shortages as a result of El Niño. This report will help in mitigating the effects of El Niño and also assist in implementing action plans to reduce the suffering in high-risk countries.

With the possibility of an El Niño occurring, we should feel lucky that we live in a time where science and technology is advanced enough to predict as to when an event like this is going occur which gives the world an opportunity to be aware and ready for it.