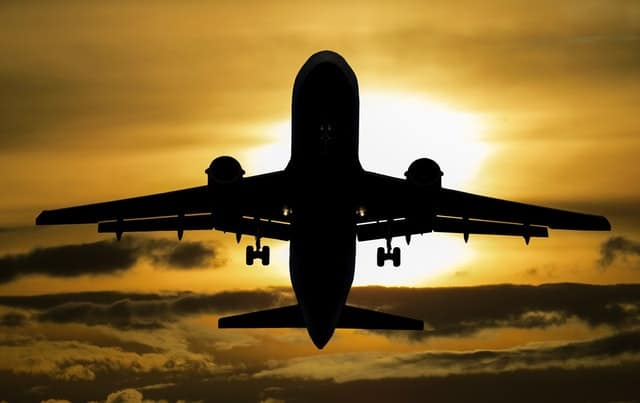 Flying is indeed bad for the planet because it contributes to global warming, pollution, and leaves a huge carbon footprint. Airplanes run on kerosene fuel, which when combusted, releases a large amount of carbon dioxide and other gases into the atmosphere. Even though aviation is not a large industry, it has a large impact on the climate system.

The aviation industry is one of the fastest-growing sources of carbon gases in the atmosphere. Airplanes are important to the economy in various ways such as imports, exports, tourism, and business. But the importance of the industry comes with adverse effects, which continue to affect the climate with little or nothing to do because of how the industry is tremendously growing and there being no alternative to kerosene as fuel.

What’s more, the amount of carbon footprint left on the planet by a single flight is a huge contributor to global warming. And to make matters even worse, the increased use of airplanes in travel due to its efficiency and the fact that it helps travelers save time does not make it any better.

The high rate of combustion of the fuel increases the amount of carbon emission, which directly affects the erosion of the ozone layer and therefore leading to global warming.

Effects of Air Travel on the Environment

Aircraft engines combust fuel to emit carbon dioxide, water vapor, nitrogen oxides, carbon monoxide, and soot. Nitrogen oxides emitted by aircraft contributes to global warming and is a pollutant in the lower atmosphere whereas it destroys the stratospheric ozone layer in the high altitudes.

The impact of carbons released by airplanes is no small issue considering that the emissions are realized at a higher altitude and faster.

Emissions at higher altitudes pose a greater danger because they trigger a series of chemical reactions and atmospheric effects cover wider areas. It is even recorded that traveling by air has a greater environmental impact per kilometer as compared to other forms of transport such as driving. Even as other industries receive significant improvements on emission levels; that of the aviation industry stagnates.

Noise as a result of the aviation industry can be regarded as debatable. This is because noise produced by airplanes is short-lived. However, to those residing or those near airports are affected hugely by the noise.

Some of the adverse effects that these people face include sleeping disturbances, performance effects, and interference with communication along with cardiovascular and psycho-psychological effects.

The noise of an aircraft is the responsibility of the airport operator and he or she should then ensure proper mechanisms to set, monitor, and ensure noise insulation schemes are in operation.

Contrails, water vapor, released by airplanes forming condensation trails, trap heat that would otherwise be released from the earth. This brings about global warming. According to studies, night flights cause global warming more compared to day flights because contrails help in reflecting sunlight during the day.

The contrails in the sky condense at higher altitudes and can spread up to two kilometers from where they have been realized. They tend to trap heat that would otherwise be dispensed from the earth, greatly contributing to global warming.

Solutions to Reduce Impact of Air Travel on the Environment

1. Setting up of Regulations

As a solution to environmental degradation as a result of air travel, the regulation of the industry is needed. International Civil Authority (ICAO) in 2016 proposed the Carbon Offsetting and Reduction Scheme for International Aviation (CORSIA) which gives airline restrictions on carbon emissions. If the limit is exceeded, then airlines will buy offsets from other sectors.

The issue of regulating the aviation industry should, therefore, be treated as other transport policy and its consistency maintained so as to protect the climate. In order for regulations and policies to take place, international cooperation should be enhanced to achieve its efficiency.

To deal with the problem of climate impact by the aviation industry, technology can be used in the design and systems of planes to make them more efficient. A breakthrough in the use of another type of fuel that is greener, like biofuels, hydrogen, solar panels, and batteries, could save the world from the degradation of the environment by aircraft engines running on kerosene.

However, the rate at which this progress is made cannot be compared to the rate at which the number of passengers are buying tickets. Also, the fact that aircraft have to carry their own fuel is one that should be dealt with and have such engineering problems looked into and a solution is reached.

Charging the number of greenhouses emitted into the air by aircraft could go a long way in discouraging pollution. These charges should be made payable by airlines for every ton of greenhouses emitted. Like other transport operators, it obliges airlines to pay for the pollution they cause thereby limiting them to lower amounts of emission because it comes at a price.

In addition to emission costs, the government can also add environmental and social costs. Most airplanes have embraced this and have been coming up with projects that help offset their carbon footprints.

There is a mechanism that helps in the calculation of the amount of carbon footprint created by a flight and the money generated in offsetting allows the airplane companies to start projects that protect the environment.

One of the most effective ways to reduce the amount of carbon footprint is by flying less often. This means in the case where other forms of transport are available, it is not a must for an individual to fly.

Instead, driving or taking the train to the destination as a preference for the majority of the people would mean airlines burn less fuel. Taking holidays that are not so far away could also help in the reduction of greenhouse gas emissions.

5. Use of Computer Programs to Reduce Noise Pollution

As a means of preventing noise pollution by airports to its neighborhoods, computer programs can be used to simulate aircraft operations to identify areas that are prone to such disturbances.

Virtually predicting the extent of noise levels using the International Noise Model can be used to address the issue. The model is widely used to come up with aircraft noise footprints for a certain number of aircraft at average weather conditions.

In a bid to protect the climate, optimizing flight routes can reduce the negative effects of flying. Having a flight plan that avoids weather conditions, which results in the creation of clouds is among the best strategies.

By limiting the formation of clouds, it aids in the release of earth’s radiation into space resulting in a cooling effect. With the proper formulation of routes, climate protection by aircraft can be achieved. Plus, airlines with routes that pollute less can be charged less money for pollution certificates.

Aircraft engines, unlike other engines, have no other greener alternative such as the use of solar or other renewable energy. Technological advancement in the sector might lead to electric planes that emit less and are more fuel-efficient. However, the sector remains negligent in matters of the environment.

For instance, most airline websites mention little about environmental protection or have completely nothing to do with the environment. Also, NGOs that deal with the environment are reluctant on the matter. Such negligence can be attributed to a huge concentration on profits earned by airlines that have seen the industry continue to grow irrespective of how bad flying is for the planet.