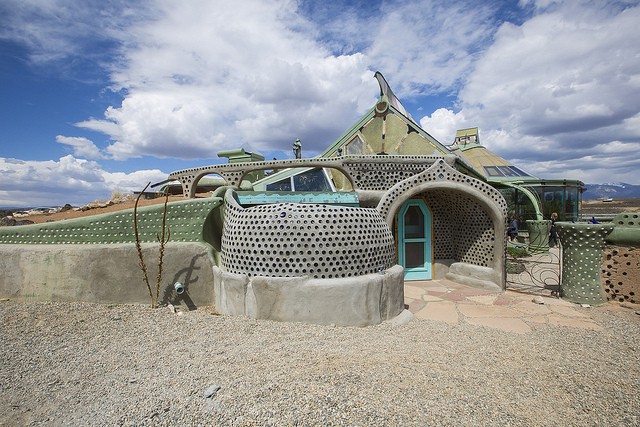 An earthship is a radically sustainable living structure which was developed and has been under advancement by architect Michael Reynolds for about the past forty plus. It is distinguished by having a passive solar system and the structure is made with both upcycled and natural materials such as earth-packed tires. Thanks to research and development, an earthship is a now a very affordable and self sustainable structure. Their self sustainability is because they address the six main areas needed to drop off the grid, which include;

Earthships are relatively off the grid because they are widely self dependent. They produce their own food and electricity, harvest natural water and handle the sewage. More research is being put into developing the perfect off the grid bio-structure with zero emission.

Construction and Design of an Earthship

From the birth of the first earthship home in New Mexico, earthships have come a long way since. When Michael Reynolds came up with the concept, he wanted an earthship to be built out of affordable and readily available materials, to be easily constructible for people who have no building skills and produce energy from natural sources.

The procedure below is a basic procedure of a V-shaped earthship but earthships varies in design depending on topography and materials used. The v-shape is more preferred because it is easier to collect water due to the slant and the temperatures are more regulated because it is slightly underground and the materials used are dense. The reason tires are preferred is because they are not biodegradable therefore are more durable than wood. Apart from this, the tires are recycled which is good for the environment.

Choosing and excavation of a site

An important factor to consider when making an earthship is the angle and direction of the sun. The reason for this is that the sun’s light provides energy for electricity in the earthship and its heat regulates temperatures. If you want your earthship totally independent, you might want to consider the soil of the place and its suitability for agriculture. If you are considering wind power make sure your structure is in an area free of wind obstructions like trees and hills.

Excavate soil from your chosen site by digging about five or more feet into the ground. The bigger your earthship, the more soil you will need. Furthermore, the depth of your foundation will depend on the climatic conditions of your chosen location, the wetter the climate, the deeper the foundation. The soil from your site should be well kept as it will be used later in construction.

Trusses or vigas for roofing

Making the foundation and outer walls

It has to begin by laying out the tires. This is a process is better off done by two or more people. While one pours earth into each tire, the other should have a sledgehammer pounding the dirt into the tires. Two wheelbarrows of are needed on an average sized tire but if the tires are bigger, it’s just a matter of more earth. Note that it is important to find out what the laws of the state or country regarding the use of used tires.

After two tires are laid, filled with earth and pounded, one has to be laid between them like construction workers do with bricks. If concrete is affordable or there is some clay available, it can be used by putting it between the tires to reinforce the strength of the wall.

Alternatively, an extra tire can be jammed in a line for strength. This should be kept up till a straight wall is achieved. More people opt for the v-shaped earthship so, if this is the target, more tires need to be laid at the front and less at the back. The top of the walls are made up of recycled tin cans joined by concrete. If concrete is not in the list, one can opt for mud, but it will not be durable.

After the outside walls are made, it is time to make the interior walls depending on the number of rooms needed. Most prefer tin can walls as tins are readily available. The tins can be joined by concrete or mud depending on which one works. The tins are joined with concrete and resemble a honeycomb when finished. However, if one prefers stronger walls, one might continue using stacked tires filled with earth.

Roofing can use the same construction strategy as truss. Truss is a structure made of two or more metal poles or wood beams to form a triangle or a series of triangles. Roofing materials like dried grass, wooden beams or the rest of the tin cans and a ceiling are joined to it. A vigas can be just as effective.

Power production in an earthship

As said earlier, power is one of the areas an earthship takes care of off the ‘grid’. The main sources of electrical power are from the sun and wind both which provide clean energy. The sun’s power is utilized using photovoltaic solar plates. As for wind, wind turbines are set up at an optimal position where winds blow strongest.

Both wind turbines and solar panels generate Direct current (DC) electricity that is stored in deep cycle batteries. A power organizing module is usually installed on the walls of the earthship takes some of the stored energy and inverts into Alternating current (AC) which is used by most appliances. The earthship takes care of its own cooling and heating so there is no need to use electricity on temperature regulation.

Water production in an earthship

Earthships are made to catch all the water around them. The water may be from rain or snow. The slant of the room makes sure water is directed towards the back of the house where it is directed into a cistern by a gutter with a sieve to catch any solid particles in the water. The cisterns then direct water into a water organization module to be made safe for drinking by removing bacteria and anything that might contaminate the water.

A direct current pump operated by electricity from the deep cycle battery then pumps water into a pressure tank where it can be used for drinking and other uses. After water is used, it comes out as grey water or black water.

Grey water is water from sinks and showers and it is recycled and used to water edible plants and flush toilets. Black water is from toilets. It is directed to septic tanks which separate solid waste through anaerobic respiration. The water can be used in watering non-edible plants while the waste is used for biogas production.

Cobb is a material made from sand, clay, earth, straw and water used for construction. It is very suitable for areas that experience earthquakes as it is resistant to seismic action. Since it has a lot of bulk, it provides thermal heat insulation too. It is also more versatile in use and can be used to make more artistic homes than a regular earthship. It uses natural material in its construction instead of recycled therefore still ‘clean’. It can easily be done by an individual or with a couple of friends or family or refer to Michael Reynold’s word or contract his team at earthship biotecture.

The custom earthship is the ultimate earthship. It is more expensive than any other model but that is because it incorporates all the ideas perfected over the years and is totally independent. It comes with electricity generation, water catchment, food growing, sewage management and heat insulation. It is bigger with more rooms, and more all rounded in terms of the climate than any other type but it costs a little more. If you want to save money used in bills though, you should try it and it will pay back in no time. This is not a DIY project though; you would have to contact the earthship biotecture team.

This is the do-it-yourself project that most people opt for. It is cheapest, can be built with readily available material and easy to build. They can be modified for different environments but the concept is just the same. The concept behind the simple surviving earthship is to be a beginner home that you can add on to as time goes on while still following the basic concepts of an earthship.