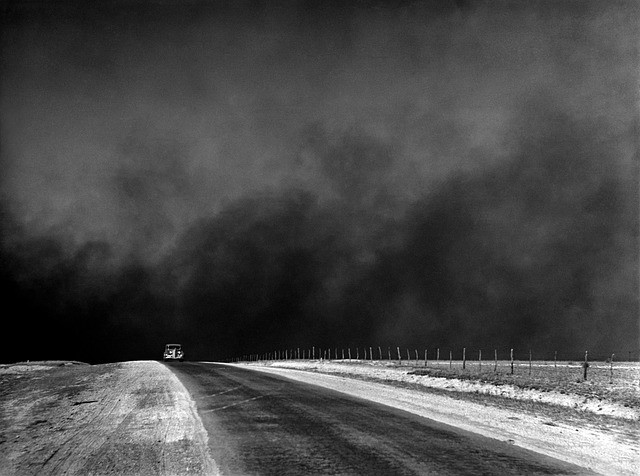 Dust Bowl is the term used to describe the period of severe dust storm and a natural disaster of the American and Canadian prairies during the 1930’s during in the reign of President Herbert Hoover. The decade long disaster was characterized and caused by a series of droughts, poor dry-land farming methods, lack of rainfall, over-cultivation, and poor soil conservation techniques that made it difficult to prevent wind erosion.

The result of this saw millions of acres of farmland destroyed since the top soil was swept away and the crops destroyed. During the event, the top soil was blown away in huge clouds of dust at speeds as high as 60 miles an hour and reaching cities as far as Washington DC and New York from the affected areas in Oklahoma and Texas. This article seeks to further highlight 25+ mind blowing facts about the Dust Bowl.

Fact 1. The disaster was man-made. Wheat farming was the booming cash crop of the 1930’s. It was a money maker and always had a rising demand. Consequently, there were lots of practices put towards preparation of land to grow the crop in anticipation of a bountiful harvest. This involved the use of tractors and grazers that led to over cultivation of the land thus extensively loosening the top soil. This soil posed little resistance when winds came and this marked the onset of the disaster.

Fact 2. The Great Depression coincided with the Dust Bowl. The Great Depression is a time in US when there was economic disaster due to unemployment and rising poverty levels. The collision of these two events had adverse effects on the people who were displaced since they could not get employment in the countries they sought refuge from. Moreover, they did not have food, clothing or places to sleep at night.

Fact 3. Dirty Thirties is the synonym of Dust Bowl. The disaster happened in the 1930’s and was characterized by a lot of dirt in the form of dust. As a result of this, the name ‘Dirty Thirties’ was coined.

Fact 4. Federal government converted farming land to grasslands. The federal government under the President Roosevelt purchased millions of acres of this plain land that had been affected by the Dust Bowl and turned them into grasslands to hold the soil and save the land. This was an initiative by the president to salvage the country. The lands are still grasslands to date.

Fact 5. A reporter named the disaster ‘Dust Bowl’. Robert Geiger was doing a report just as other reporters, on the disaster that had hit various states in the US. He described it as the dust bowl of the North American continent and the name stuck right away. Politicians, media and people took up the name and the disaster has been known as the Dust Bowl to date.

Fact 6. Millions of acres of land were affected. The area where the Dust Bowl was witnessed has been recorded to span over 100 million acres which can be translated to cover several states of the United States of America.

Fact 8. The dust led to the deaths of people. About 6,500 people died in the first one year of the Dust Bowl. The dusty wind carried with it coarse and fine particles of soil and other materials. The inhalation of the dusty air also led to lung illnesses and pneumonia that killed numerous children and adults, some of who died decades after the event.

Fact 9. Snakes were hanged to save the plains. The disaster was a major one that rendered a lot of solutions in order to salvage the land. Some people in the affected states believed that by killing snakes and hanging them with their stomachs up would end the disaster and bring rain to the land. They hunted for snakes, killed them and proceeded to hang them on their fences.

Fact 10. 1933 witnessed over 30 dust storms. This year had more dust storms than the other years stricken with the Dust Bowl. Movement of automobiles was restricted since dust storms could appear anywhere on the plains and at any given time.

Fact 11. One cow was worth 1 dollar. In a bid to salvage what had been left and still survive the drought, the federal government purchased starved livestock for one dollar to use the funds in helping those affected by lack of food.

Fact 12. The education sector was adversely affected. Schools were also destroyed when the calamity struck. Children were forced to either cease attending school or they were referred to the few available schools not destroyed in the plains. Nonetheless, there were days when no school was attended especially when the dust storms struck.

Fact 13. Thousands of Rabbits appeared out of nowhere. The disaster saw the sharp decline in the agricultural industry with the wheat market being the worst hit. A few acres of crop were able to survive through the drought and the disaster. However, hundreds of thousands of rabbits appeared in these plains and ended up eating up the crop that was left behind by the dust bowl. These rabbits had never been seen in such quantities and ended up destroying what was left of the millions of acres of farms.

Fact 14. Millions of people were rendered homeless by the Dust Bowl. Dust Bowl covered over 100 million acres of land and when it struck, 2.5 million people with schools, businesses and work places left the Great Plains.

Fact 15. The plains would be covered in paper. When the wind continued to blow over the plains, there was a lot of destruction which ensued for years. Companies that made waterproof paper with the same characteristics as PVC (polyvinylchloride) suggested a solution to the government that they would cover the millions of affected acres with waterproof paper to conserve the water present in the soil and act as artificial mulch.

Fact 16. Millions of grasshoppers swarmed the place. Swarms of grasshoppers descended on the remaining crops and left no crop standing. These insects would descend on a single acre of farm and eat up all the crops within a matter of minutes and then migrate to the next farm. In order to combat this, the United States government had to burn all infested fields to fully eradicate these persistent and destructive insects.

Fact 17. 75% of the population affected stayed put. It is common knowledge that a great number of people were displaced and ended up in California and a few neighboring states. Nevertheless, studies have shown that only a quarter of the population displaced migrated. The majority stayed and survived the Dust Bowl.

Fact 18. ‘Dust Bowl’ had also been christened ‘Dust Belt’. Days after Robert Geiger has named the disaster ‘Dust Bowl’, he referenced to it as ‘Dust Belt’. Nevertheless, Dust Bowl stuck and he got the credit for that name.

Fact 19. Establishment of the Soil Conservation Service (SCS). The ministry of agriculture proposed the creation of this department when it was realized that Dust Bowl was as a result of poor soil conservation. This was done in 1935 under the leadership of President Roosevelt. Farmers were trained on various farming techniques to ensure better crop production while conserving the soil.

Fact 20. Rainmakers were paid to bring rain. Desperate times called for desperate measures. A few people gathered and contributed money that was geared towards attaining the services of a rain maker. When he was found, he fired away miniature rockets loaded with dynamites to the sky to induce rainfall. This option failed terribly.

Fact 21. The 1950’s also experienced the Dust Bowl phenomena. For five years in the 1950’s, excessive drought led to the same disaster.

Fact 22. Setting up of pavements was suggested. A company in New Jersey suggested the option of paving the plains to prevent further loss of the top soil and eventually, conserve the soil.

Fact 23. Blue flames were witnessed. There was a lot of static electricity that was created due to the friction between the ground and the dust that was being blown. As a result, blue flames were seen when this friction passed by any metallic objects such as fence wires. Due to the magnitude of the dusty wind, the static electricity that built up was so great that cars had to tether chains towards the ground to earth any static current to ease movement and reduce chances of electrocution.

Fact 24. There were four droughts spaced out in the decade. Drought was one of the causal agents of the Dust Bowl. As such, there were a number of droughts which spanned the 10 years of the disaster. The years between 1930 and 1940 experienced four major droughts with the last one ending in 1940.

Fact 25. California became a major immigration camp. Most of the states that experienced the Dust Bowl were neighboring California. As a result, when tragedy struck, the safe haven for most of the residents of these plains ended up being California. Over 300, 000 people moved there to settle permanently. Few others moved to other neighboring states.

Fact 26. Establishment of Shelterbelt Project. This was an initiative set to plant trees to avoid such a large scale type of soil erosion. It was also a way to provide work to the unemployed for they were the ones tasked with the activity of planting trees.