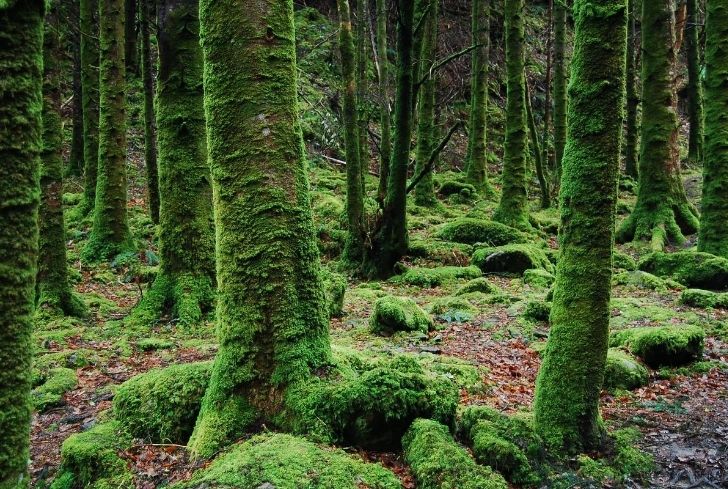 While many prefer moss gardens, there is a common misunderstanding stating that moss doesn’t thrive well in the sun and requires proper and consistent shade to thrive well. You probably have a beautiful, sunny garden or a patch that receives ample sunlight; but owing to this misconception, you are now completely confused about whether you should indeed grow moss in that specific area.

Luckily, we are here to dispel all your moss myths. For the uninitiated, moss DOES grow in the sun. Although most species prefer shade, there are a couple of moss species that really enjoy the sun and will thrive well in proper sunlight. In this article, we will discuss all these moss types while also debunking other common moss myths.

Types of Moss That Will Grow in the Sun

In this section, we will learn more about the different species of moss that grows and thrives well in a sunny patch.

The Pincushion Moss, alternatively known as the Leucobryum Glaucum prefers thriving in moderate shade and indirect sunlight. This moss derives its name from the cushion-shaped mounds it develops at the stage of cultivation.

Pincushion moss can thrive in sunlight and can also withstand dry conditions. Another defining quality of this specie is that it can survive in any type of soil including acidic, rocky, loamy, dry, or sandy soil.

Caring for this moss is simple and since it can also thrive in sunlight, this might just be the perfect moss to add to your homes.

Popularly known as the round stemmed Endoton, this is yet another excellent specie of moss that can successfully thrive in sunlight. As with any other moss growing in sunlight, the Entodon is a non-moss that can practically grow anywhere.

Yes, this moss is perfectly adaptable to different soil conditions and can also grow in rock and wood in addition to soil. Thanks to its high adaptability and excellent tolerance towards the sun, this is probably one of the top choices for multiple gardeners.

While Entodon moss will also grow in shade, it is especially fond of the warm sun rays. This moss will thrive well on your lawn patches or concrete walls. It appears shiny and comes with many impressive properties like its uniquely shaped stem and high adaptability. This moss is also easy to maintain and since it is also versatile, the Entodon Moss is a top choice for almost all plant lovers.

The Tree Moss is one of those species of moss that can grow in both partial sunlight and consistent shade. This specie of moss is perennial which means you can enjoy its greenery for at least two years. The Tree moss derives its name from its appearance, which is almost similar to tiny clumps of evergreens baring the leaves, twigs, and branches.

See also  Do Holly Trees Have Deep Roots? (And Are They Invasive?)

Tree Moss can also successfully thrive in different kinds of environments and soil types. So, whether the soil is rocky or loamy, this is one specie of moss that won’t disappoint you. Cultivating this plant is extremely simple and since it is also highly hardy, it can tolerate multiple instances of overwatering.

In the wild, you will find the tree moss on tree trunks, on small rocks near river streams, and along the beautiful woodland trails.

This is yet another specie of moss that can thrive in partial sun. Unlike other variants of moss, the Spoon Leaved Moss forms beautifully dense foliage resembling a cushion. Their stems can assume a lofty height, growing up to 1.5 inches.

Sadly, they are always hidden by the tight set of leaves that tend to cover them. You will also find a small overlapping leaf along the blunt stems which further resembles a bunch of caterpillars. New leaves of the Spoon leaved Moss are bright green in color.

As they start aging, they take a yellowish to a dark brownish hue. You will find the Spoon Leaved Moss in multiple parts of the US and some parts of Canada.

Unlike in the US, in Canada, these species of moss are deemed rare and are only available in certain areas of Ontario. The Spoon Leaved Moss requires loamy and fertile soil to thrive and it ends up having a fairly long life expectancy when growing in an ideal habitat.

The Juniper Moss is probably found in almost every continent across the globe. Unlike other variants of moss, this specie prefers thriving in dry areas and is rarely present in moist, loamy environments.

This kind of moss is also widespread and you will find them on dry grassland-like areas, forested footpaths, rocky areas, gravels, and everything in between. It is attractive, but for many, it might appear unfriendly at the outset. The foliage is spiky and features patterns like that of the rosette.

This is one of the hardiest variants of moss that is best known for its lush green foliage. The Irish moss can successfully withstand foot traffic and it will also cover your garden patch exceptionally well.

Unlike other species of moss, it can tolerate full sun as well as humidity. The Irish moss is also fond of moisture, and you would want to put it in loamy soil with moderate doses of fertilizers. Another unique quality of the Irish moss lies in the fact that despite tolerating full sun, it can still perfectly thrive in cold environments where the temperature level drops below 30 degrees or even lower.

In Spring months, this moss produces stunning white flowers that can totally uplift the look and feel of your garden. In case you already have the Irish moss growing in a specific area of your garden, you can easily transplant it as and when needed.

Thanks to their shallow roots, moving these plants are a breeze! All you need to do is scoop up the clumps and gently spread them in the new spot. Over time, you will find the same clump covering around 6 to 12 inches.

If you are planning to plant your moss in a spot that is more likely to be disrupted, this might be your top option. The Ceratodon enjoys basking in the sun’s complete glory and is primarily found in areas that are either frequently used or were polluted at one point.

Also known as the Fire and the Red roof Moss, you will find these species along with burn sites or in areas that have witnessed the exposure to multiple elements.

The Ceratodon is absolute charm and it can light up the dullest gardens with their short vibrant tufts that are both green and purple in color. Another unique quality lies in their long, reddish-brown shoots that render this specie an ornamental appeal.

The Ceratodon is also one of those rare species of moss that can thrive in almost every kind of environment. Whether it’s a natural or man-accident, this moss will continuously thrive while appearing as magnificent as ever.

Also known as the Scottish Moss, the Scotch Moss is yet another beautiful ground plant that can tolerate the sunlight. Being a versatile specie of moss, it can survive full sunlight as well as partial shade.

You should not, however, consider cultivating this specie in an area that receives complete shade. The Scotch moss can be planted between multiple pavers or along your garden or patio pathway. Their defining element lies in the fact that they almost immediately bounce back if you end up stepping on them.

Unlike several other variants of moss, the Scottish Moss enjoys an environment that isn’t moist and loamy. Also, despite tolerating the heat, it does not thrive in humidity. While the Scotch moss takes the most stunning appeal during the mid or late summers, their beauty is at the very best during spring, when they finally bear tiny, whitish flowers that covers your entire garden patch.

If you have chosen a moss variant that thrives best in a low-light environment, constant and direct exposure to sunlight might affect its lifespan. Otherwise, many other species of moss can withstand partial sunlight for up 8 to 10 hours or even more.

See also  Can You Compost Ginger? (And Ginger Peel?)

Since this entirely depends on the requirements of the specific moss specie, it is important to understand the sunlight requirements for your preferred species of moss even before you invest in it.

How Much Sun Does Moss Need?

The amount of moss required by each species of moss entirely depends on the kind of species that you are looking to grow. For instance, certain specific species of moss prefer thriving in areas that are mostly shaded with a typical low-light environment.

These species require sunlight for only 2-3 hours at most. There are, however, other species that thrive best in areas where they receive indirect (around 8 to 10 hours of) sunlight. Given these conditions, it is vital to understand the type of moss you are planning to grow.

Sunlight shouldn’t be a constraint for moss growth if you choose the right specie. Usually, moss spores are found in the air and they only require moisture for proper germination and maturing. After getting completely established, moss can turn out to be extremely drought tolerant.

They will also grow in almost every kind of soil as their shallow roots can successfully hold the moss without drawing excess nutrients from the soil. While they do receive some amount of nutrients from the water, most of their food is produced and processed through photosynthesis.

What Does Moss Need to Grow in the Sun?

There isn’t any unique hack or a ninja technique to help moss grow in the sun. All you need to do is ensure that your garden or patch has ample moisture and just enough sunlight. Make sure the soil is moist and not waterlogged. Most species of moss come with shallow roots which means they do not need any added fertilizer or rich soil for thriving.

The most vital aspect to consider while working on your moss garden is to choose a specie that indeed thrives under sunlight. As we previously mentioned, certain species of moss don’t thrive well when kept under direct sunlight.

For some, indirect sunlight does just the right job while others need partial shade. Since we have already done the research and listed the moss species that do well under sunlight, we’re confident that you won’t encounter any more hiccups along the way.

Well, now that you are at the end of this article, you probably understand that moss grows and thrives really well under full sunlight. Right now, all you need to do is pick your preferred species of moss from the available options and start growing them at home according to our recommended guidelines.