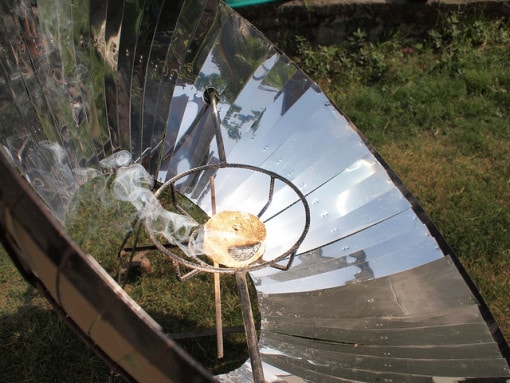 If you are in the world of trying to figure out the best way to save energy, you have likely been making that great transition into the world of using solar energy. That being said, solar cooking has become a way of life for many people who are trying to conserve energy and help the environment at the same time. But, what is solar cooking like? How can you put together your own solar cooker? How does the whole process work? We’re going to explore those questions and more throughout the entirety of this article.

Solar panel cooking can be fun and easy, and it’s great for the environment. No longer would you have to deal with gas-powered stoves or electrical ovens and all the hazards that come with them. Instead, this article will show you how to construct and use your very own solar panel cooker from everyday materials.

How Does Solar Cooker Work?

As you may expect from the name, solar cooking is, in fact, a way to use the sun in order to cook your food. This is instead of a grill, stove, or oven. That being said, there are a few main principles that come into play when you’re looking at solar cooking.

Your solar panel cooker needs to stay outside where it can absorb the thermal energy from the sun’s rays. It won’t work after dark or when clouds are obscuring the sun from your solar cooker. High winds can be a problem as well, as they can blow your food about.

The solar cooker transfers sunlight into thermal energy, radiating heat along the aluminum foil insides of your panels. The solar cooker should sit in direct sunlight for several hours before it will be ready for use. But when it is, be careful, as it will be very hot- hot enough to cook food, hopefully. Treat the solar cooker like a grill, handling the food on it with a spatula or long fork. You should also wear protective gear like an oven mitt on your hands to shield yourself from the heat.

To get the most out of your solar cooker, it is a good idea to cover it with a sheet of foil or some other metal covering. This traps the heat inside and warms food even faster. It also keeps food juicer and tastier so no fluids and aromas are evaporating or escaping through the top opening.

When you are not using your solar cooker, it should be stored out of the sunlight and away from liquids that could damage the cardboard frame.

How Do I Build a Lightweight Solar Cooker

First, you’ll need some materials, and the required ones are common enough: One medium-size cardboard box, a roll of aluminum foil and glue. You can get both of these at the grocery store, as grocers are always tossing out the cardboard boxes that their stock comes in.

On both pieces draw ray lines on the large portion of each panel. Start at a corner next to the flap and draw the lines outward toward the opposite edge of the same rectangle. There should be about five ray lines on each large portion of your pieces. These ray lines will be fold pieces, but we’re not ready to fold them just yet.

Next, make a cut from the origin of the ray lines along the base of the flap, but only cut halfway up the flap

Putting the Panels Together

Now fold on all of the fold lines you made, then glue aluminum foil on the inside rectangles. A single layer should suffice. Now you are ready to assemble your two pieces. Fit them together in two “L” shapes where the large, folded rectangle portions are opposite each other and the small flaps join with each other.

Now it is time to make your pieces join securely and give them support so the solar cooker can stand up on its own. Cut a small piece of cardboard from your original box and place it at the bottom corner of the panels, where the two pieces meet. Glue this piece to the base of the bottom panel, then make two small, pencil-sized holes in the upper flap of your small joining piece. Run a string through these holes and tie it securely when you have the panels adjusted how you want them.

You should now have a working solar cooker that looks like a splayed funnel with only one opening.

How Do I Build a Heavy Duty Solar Cooker?

Alright, so now that we have an idea of how the solar cooker is going to have to work, we’re going to share an easy way to actually put a solar cooker together.

This will give you an idea of how hot it can get – you want it to maintain between 250 and 350 for an extended period of time in order to be able to use it effectively.

Instead of using a standard oven, maybe it’s time for you to think about and consider getting into the whole prospect of solar cooking. Look into the process for yourself, give it a try and see how much of a difference that it can make for you and your efforts toward helping the environment and the world around you to thrive. If you haven’t tried it out yet, why not? It could make a huge difference for you and your family.