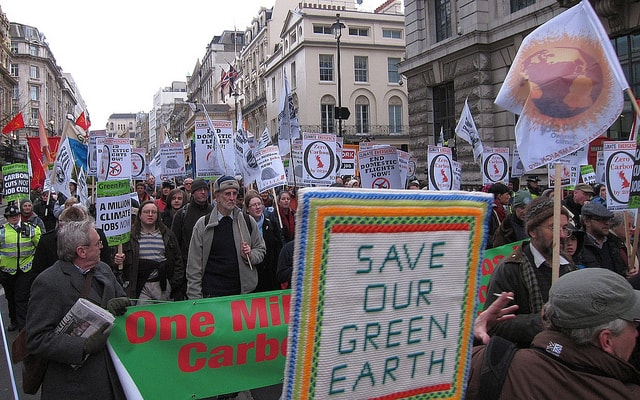 Due to a recent statement made on a blog, the executive of ExxonMobil, Suzanne McCarron have restated the claims made by her company that it is fully mindful of climate change and she has also stated the company has plans to do something on protecting the environment against climate change.

McCarron has said: “I would want to use this chance to be 100 percent clear on where we stand on climate change. We believe that the risk of climate change is detrimental and we want to be part of the solution and not the problem”.  However, one question that comes to the mind is that, if this company is devoted to fighting against climate change, then, why is a still part of the problem.

Due to a conversation and a hearing between Oklahoma Sen. James Inhofe and the administrator of the U.S EPA (Environmental Protection Agency), Scott Pruitt, which provides an exposure to how ExxonMobil’s undue influence remains the obstruction to the actions on climate change.

In the time of this hearing which took place on Jan 30 and was held by the Senate Environment and Public Works (EPW) Committee, Sen Cory Booker unconsciously aggravated Inhofe by bringing up the issue of environmental justice. Booker also made reference to the threats of climate change such as flooding which poses a three dozen Superfund sites in his state and he has pleaded with Pruitt if he has “considered the environmental problems directly impacts people of different communities and of low-income communities”.

During this hearing, Inhofe took the opportunity to refute Brooker saying that lots of low-income communities are excessively harmed by environmental protections, thus, citing that the last government which was headed by Obama through the Clean Power Plan, which would have actively reduced carbon emissions drastically if Pruitt hadn’t abolished it.

Inhofe also concluded that Brook was suggesting that Pruitt was trying to put lots of American citizens at risk by punishing them. Furthermore, Inhofe also made some confession on the effects of the Clean Power Plan and made reference to the Harry Alford, the president of the National Black Chamber of Commerce who provided that the Clean Power Plan and some other regulations would aggravate the cost of living and increase the level of black and Hispanic poverty, in addition, to increasing loss of job and energy costs. Inhofe also wonder if the last government forgot that lots of Americans do pay the price just to keep their house warm and to feed themselves.

In addition to this, Inhofe concluded his statement by using the testimony made by Harry Alford who is the president of the National Black Chamber of Commerce (NBCC) as a point of reference which was unremorseful when it comes to benefiting from the fossil fuel industry. “No doubts, we do and it is only natural that way,” Alford stated on NBCC’S website. “The history of fossil fuels have long helped the legacy of the black people, however, the fossil fuel has been our economic pal”.

However, one of NBCC’s closest economic is ExxonMobil, and it is important to note that this company has offered more than $1.14 million to NBCC since 2001.

In 2015, NBCC officiated a report that appealed that the Clean Power Plan would impose severe poverty and impoverishment especially the low-income families”.

Despite all of these, it is important to also note that unchecked climate change would more than likely affect those communities most and also investments in energy efficiency under this program would ultimately decrease electricity bill all over the country.

See also  UK's Most Important Wildlife Populations Have Tumbled Since 1970

In addition, it has been noted that ExxonMobil has tried to finance lots of facts and studies to derail the Clean Power Plan. Also, ExxonMobil is a major supporter of lots of Senate EPW Committee members with Inhofe included. These set of people are obstinate climate science deniers.

Moreover, Inhofe has tied communication with the oil and gas industry, which has donated $1.85 million to his campaign more than twice, furthermore, there other oil and gas industries among the top 10 that have also contributed to Inhofe campaign, some of them include the Koch Industries, Devon Energy, etc.

Nevertheless, 6 of other 10 Republicans on the EPW Committee are also on the list of ExxonMobil’s donation list and this also includes Wyoming Sen. John Barrasso, who is the current committee chairman. Almost half of $119,500 ExxonMobil contributed to the seven senators in the past few years went to Barrasso and Inhofe.

In some weeks when the company made a donation last 2 years of a sum of $50,000, Pruitt and also RAGA Chairman, Luther Strange, who was Alabama’s attorney at that time, co-authored a National Review column confronting a coalition of state attorney general inspecting ExxonMobil and other fossil fuel industry about not be truthful to investors and the citizens about climate change.