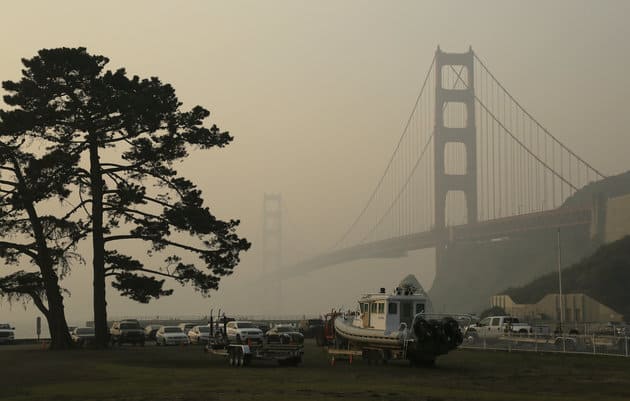 With absolutely no signs of stopping, the deadly camp fire are causing severe damage to properties and human lives. Northern California is chocking under the thick layers of smoke originating from the fire risking both human and animal lives.

With more than 10 days into the deadly Campfire farther north, the San Francisco Bay Area was seen covered with a layer of smoky haze on Monday, making lives difficult for the homeless residents, who couldn’t easily seek safety indoors. Homeless people sleeping on the streets of San Francisco and other Northern California cities are exposed to the harsh weather day & night and for the past week the air quality has turned to sever from worse.

“My youth, particularly those with respiratory issues, have been complaining that their chests are tight, they’re finding it harder to breathe, their eyes are burning a lot,” said Monica Steptoe, associate director at Larkin Street Youth Services, which runs a shelter in for 18- to 24-year-olds in San Francisco.

She further added that her group, which serves youth with asthma and respiratory infections, have seen a rise in the number of cases where their friends living on the street had gone to the hospital due to difficulty in breathing.

See also  A Gardener’s Checklist for Energy Efficiency and Conservation

According to an interview with “The HuffPost” Jennielynn Holmes, director of the shelter at Catholic Charities of Santa Rosa, said “people who are housed get the respite of their home in the evening, some with jobs have the respite of the office during the day. These people have neither. They’re exposed all day long”. There are approximately 3,000 homeless people in Sonoma County and about two-thirds of them live outdoors.

The Camp fire started on Nov 8 and has already caused unprecedented damages. Some officials are considering this wildfire as among the deadliest in the recent U.S. disasters. According to official figures till late Friday at least 71 people are dead and over 1,000 are feared to be missing.

Authorities have warned that the death toll could rise further as “around 500 specialists and more than 20 cadaver dogs” are working round the clock to search and rescue for the human. With 71 confirmed fatalities, this makes it one of the deadliest disasters in recent U.S. history.

Officials said on Friday that the Campfire is about half contained after burning around 150,000 acres of land. But the rescue operation may hit a road block as weather forecasts show winds of about 50-mile per hour over the weekend.

As the air quality worsens, the San Francisco department of homeless services had distributed about 1,600 masks to homeless people as of Saturday, as stated by the agency’s communication manager Randolph Quezada.

The team also administered more wellness checks on homeless residents and added additional beds to the shelter system last week, Quezada said. But not all shelters are open 24 hours a day, prompting city officials to direct people to centers that are open all day such as public places like libraries.

See also  "Time is Fast Running Out For Us" To Evade Catastrophic Impacts of Climate Change, Warns UN Secretary-General

It is expected to rain by mid-week, which could offer some relief from the fires and improve the air quality. But then the area will brace for the risk of mudslides from the downpour.