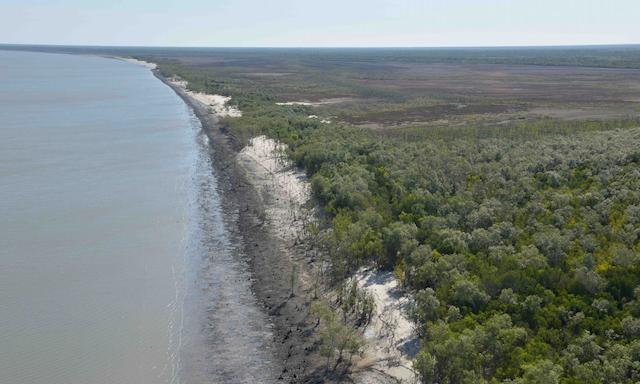 Dead and badly damaged mangroves over a vast 400km area discovered in the remote Gulf of Carpentaria by scientists in a mangrove monitoring trip. Havoc created across hundreds of kilometers by a cascade of impacts, including heatwaves, rising sea levels, and back-to-back tropical cyclones, shocked scientists.

Prof Norman Duke, of James Cook University, was monitoring 2,000km of coastline from a helicopter for 10 days. The land-based checks also conducted at 32 estuaries along the coast between Weipa, Queensland, and Cape Barrow in the Northern Territory.

In 2015, the worst mass dieback of mangroves first time recorded in that remote area. According to Duke, the reason was a combination of extreme heat, drought, and a temporary drop in sea level at the time due to atmospheric pressure.

Duke, along with his colleagues, returned for a second follow-up monitoring trip to find devastating impacts of two cyclones resulting in dead and damaged mangroves stretching over a 400km area.

Cyclone Owen battered the gulf’s coast in December 2018, and just after three months, the category 4 Cyclone Trevor struck to the south of Owen’s impact area.

“We are getting these compounding effects that we just didn’t expect,” Duke told Guardian Australia.

“The mangroves hit in the 2015 dieback are already vulnerable because they are just recovering. Now you have all this dead wood that becomes like projectiles. It was a shock to me to see the damage.”

Hundreds of kilometers of the landscape that would usually be covered by lush green mangroves, has been replaced by struggling dull grey trees with striped foliage, Duke says.

“Mangrove forests are the only continuous forests in this area. These are very successful trees and they usually form a solid green canopy that’s very distinctive. Now we see canopy damage – a grey color where it would normally be green.”

The new growth was being smothered and damaged by the stacked up dead branches behind them, he said. In many places, the shoreline was also in retreat partly due to rising sea levels, which, according to him, were rising faster compared to the global average.

“How the gulf can sustain that I don’t know,” he said, referring to the impact of rising sea levels.

As per Duke, it was “abundantly clear” that the estuaries flowing into the gulf had greater levels of erosion than noticed earlier by him.

“There will almost certainly be impacts on fisheries and the ability of mangroves to protect the coasts from erosion,” he said.

Initially, the area damaged in 2015 estimated to be about 1,000km in length in reports, but that number increased to 2,000km in the subsequent visits, Duke says. Around 8,000 hectares (20,000 acres) of mangroves had been affected.

A major study earlier this week found Australia to be a global hotspot for storing carbon in mangroves, seagrasses, and tidal marshes, but at the risk of degradation of the ecosystems which was already releasing CO2 about 3m tonnes a year.

The significant role that “vegetated coastal ecosystems” play in absorbing and locking away carbon, quantified for the first time in the findings.

Duke was not sure whether human-caused climate change was a factor in this devastation, but he added: “What would you expect with climate change, with more severe storms and higher temperatures? What does that look like?

“I believe this example in the gulf is a clear presentation, because this area is so remote. There are no other factors that we can attribute to it.”

Duke is a lead scientist of a National Environmental Science Program project that studies the after-effects of the massive 2015 mangrove dieback.

The local traditional owner rangers who supported the monitoring trips and with whom he had been working needed support to continue their work, Duke said.

According to him, rangers were not only doing vital work in patrolling the beaches, but they are also trying to look after turtle nesting sites threatened by feral pigs’ attack.