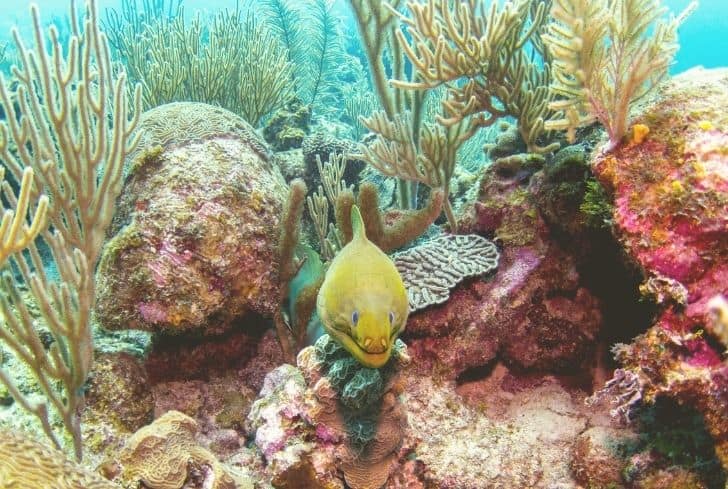 In case you missed it, 71% of the earth’s surface is water. That’s some sizeable liquid expanse on earth. More interestingly, though, is the beauty that lies beneath the world’s water bodies.

If you were to dive beyond sea level, what wonders of nature will you be interested in discovering? Are your answers limited to sea animals, fairies in a hidden marine kingdom, or crude oil? If yes, you miss out on one of the earth’s most unusual aquatic attractions – coral reefs.

So, are you wondering what this is all about? We’ve got you covered. In this post, we’ll tell you a bit about coral reefs. Then, we’ll point you in the direction of the 13 most beautiful coral reefs.

What Are Coral Reefs?

In case you’re new to it, we’ll tell you what coral reefs are all about. Coral reefs are underwater piles of invertebrate marine animals called corals.

So, here’s the thing. These marine animals react to limestone and build cup-like skeletons. In turn, and over time, they then create what we call coral reefs. You should know, these structures are beautiful and wonderful to behold.

However, beyond that, they also preserve the earth’s diversity while providing habitat for the world’s marine species.

Now let’s get to the 13 most beautiful, we must say, gorgeous coral reefs in the world. Dive in!

The blue waters and hue quickly rank this reef as among the world’s most beautiful underwater attractions. The reef is in the South Pacific overseas French collectivity of New Caledonia.

The reef is the world’s second-largest coral reef structure. This reef stands out for hosting the most massive reef diversity. It’s also the world’s lengthiest continuous coral reef.

A world heritage site, this reef is a great place to be.

Ranked as the world’s largest coral reef, it’s also arguably one of the world’s most beautiful reefs. The Great Barrier Reef is predicted to be about 20 million years old yet has managed to maintain its charm over the years.

See also  What is Bioremediation?

The reef lies off the east coast of Australia’s Queensland state. The reef is home to an estimated 3000 individual reefs, numerous species and occupies a landmass of over 340,000km2. So, if you’re looking to have a wow time with coral reefs, it’s a great choice.

So that you know, this reef is a World Heritage Site by UNESCO. Wow, right?

Its name remarkably sells out the Rainbow Reef. This reef is particularly colorful and holds a top spot as one of the world’s most famous diving locations. The interaction of 230 corals and 1200 fish species with homes in the reef makes it a pleasant sight.

The Rainbow Reef lies underneath the Somosomo strait located between Fijian Islands – Taveuni and Vanua Levu. Asides its beauty, the reef is also an essential source of food and financial value to Fijian Islanders.

We’ve got to say; this is one of the most visited coral reefs today. Even more, you get to enjoy loads of other sightings in Fiji. So, if you’re up for a great time, you should try it out.

The marine life available at this reef is vivacious, vibrant, and scenic. Another top site for divers worldwide, the Tubbataha Reefs, was marked as a World Heritage Site by 1993.

The reef is situated at Palawan, Philippines, and receives praise for being unblemished and having extensive lagoons. So, looking to have fun in the Philippines, you should try the Tubbataha reefs out.

If you need to make illustrations about beauty in harsh circumstances, look no further. This reef is located between the Sahara Desert and the Arabian desert. So, this underwater fascination lies amidst the world’s hottest and driest deserts.

The reef is an estimated 5000-year-old natural structure inhabited by over 300 corals and 1200 fish species. Apart from its stunning beauty, the reef is notable for its adaptability to unpredictable temperature and weather changes.

Raja Ampat is exceptional for its abundant spread of biodiversity and enjoys preference by divers. The reef’s location is the Indonesian province of West Papua. Spicing up the reef’s beauty and appeal is the mythological history of its name, “Four Kings.”

It’s a scenic place. So, if you want to get all mystical while enjoying the beauty of a coral reef, this is a great choice.

An integral part of Indonesia’s marine tourism is the Wakatobi reef located in the Southeast Sulawesi province. The reef is a habitat to almost a thousand fish species and 85% of the world’s total coral species.

This biological diversity of the Wakatobi is also vibrant, boasting of seabirds and turtles. The blue, green colors of the reef also make it an exciting sight to behold. The local, provincial peoples rely heavily on the reef for food and economic benefits.

Located in Cozumel, Mexico, the Palancar Reef is a part of the Mesoamerican Reef, Earth’s second-largest reef structure. This beautiful reef is highly noteworthy for its unique marine species. These peculiar species include the butterflyfish, parrotfish, sea fans, and many coral polyps.

While this reef may be small, it boasts bright colors in its array of marine plants and animals. This reef is also a notable favorite of divers from around the world.

This reef, found in British Indian Ocean Territory, houses half of earth’s known coral species. The reef boasts of 55 islands, making it the world’s largest coral-formed island. These coral-formed islands are also known as atolls.

A world-class scenic beauty, this reef is the earth’s least polluted coral reef. This reef is also the most protected in terms of national conservation attempts. One of the beautiful species home to the Archipelago is the renowned Ctenella chagius, which looks like a human brain.

The Lord Howe Island Reef is arguably an underwater paradise. This highly exotic reef, located in the Pacific Ocean, is as beautiful beneath as the ocean surface. Declared a World Heritage Site by UNESCO, this reef has a unique blend of corals and sea animals.

Diving into the reef might just reveal sharks, whales, and dolphins of various kinds. So, if you’re looking towards beauty and a full exploration underwater, you have got to be here.

The Belize Barrier Reef is at the heart of Belize’s tourism sector. The reef was designated a World Heritage Site in 1996. The Belize Reef, just like the Palancar reef, is also a part of the Mesoamerican Reef system.

The reef is renowned as a destination for scuba diving and snorkeling tourists. The Belize reef is also integral to Belize’s fish food supply and the country’s economy. Attendant mangrove forests and lagoons also prove the beauty of this reef.

This reef is distinctive for its beautiful coral colors and is home to triggerfishes and a wide range of sea turtles. The Filipino reef is the most famous site for national divers and tourists. This reef holds a park status to protect its biodiversity and prevent exploitation.

The Grand Central Station is known for its marine wildlife and endemic fish species. The Chimneys are home to colorful varieties of soft coral species.

If you’re someone who is very interested in exploring the world, then coral reefs are for you. This is even more so if you’re interested in water bodies. However, we understand that it can be quite hard to make a choice. There are hundreds of coral reefs out there.

In this article, we have shown you the 13 must go option for you. So, now that you know the world’s most fascinating reefs, it’s time to take action. Start traveling and get on course for an underwater adventure.