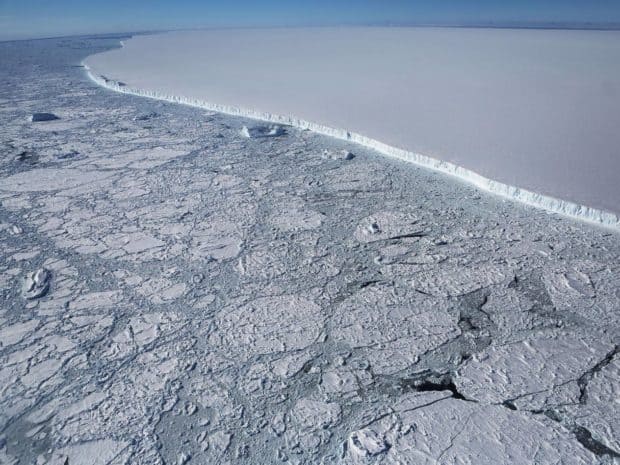 As per the suggestion of leading climate scientists, mending of the West Antarctic ice sheet could be tried using vast snow cannons to prevent the disastrous sea-level rise.

Researchers believe seawater could be converted to ice and then pumped onto the glacier, forming additional snowfall of trillions of tonnes to stave off the full collapse of the ice sheet in West Antarctic, at least in theory.

On such occurrence, the collapse could increase global sea levels by three meters and more, resulting in the sinking of low-lying global metropolises like London, New York, and Shanghai.

At present, according to scientists, even a drastic reduction of greenhouse gases may hardly prevent it from collapse.

The project requires “unprecedented” feats of engineering, and there could be a risk of a substantial environmental hazard to one of the last pristine regions of the world.

However, scientists seem divided on the proximity of such extreme measures to success.

“The apparent absurdity of the endeavour to let it snow in Antarctica to stop an ice instability reflects the breathtaking dimension of the sea-level problem,” said Anders Levermann, from the Potsdam Institute for Climate Impact Research (PIK) and one of the authors of the study published in the journal Science Advances.

“The fundamental trade-off is whether we as humanity want to sacrifice Antarctica to save the currently inhabited coastal regions and the cultural heritage that we have built and are building on our shores,” he added.

The retreat of the glacier has increased due to the underwater melting of a part of the Amundsen Sea Sector of West Antarctica. A handful of glaciers have already started to collapse as per the recent indications, and that could double previous sea-level rise estimates.

The West Antarctic ice sheet is considered a tipping point, and in case of the ice loss gaining momentum, it might continue until the entire ice sheet is gone.

In the recent study, researchers focused on the computer simulations for projecting the dynamic ice loss in the future around Pine Island and Thwaites Glaciers in West Antarctica.

According to the paper published in Science Advances, researchers confirmed the previous findings which had found that the collapse of the West Antarctic Ice Sheet may not be prevented even with the sharp reduction of greenhouse gases.

“So we investigated what could stop a potential collapse in our simulations and increased the snowfall in the destabilized region far beyond observations,” said co-author Johannes Feldmann from PIK. “In fact, we find that an awful lot of snow can indeed push the ice sheet back towards a stable regime and stop the instability.

“In practice, this could be realised by an enormous redeposition of water masses – pumped out of the ocean and snowed onto the ice sheet at a rate of several hundred billion tons per year over a few decades.”

The elevation of ice surface could reach near the point where glaciers meet the ocean due to an increase in snowfall. For stabilization of the ice sheet, simulations suggest that minimum 7,400 gigatons of artificial snowfall would be required in a decade. One gigaton is slightly less than one cubic kilometer of seawater.

The supply of the electric power required by the engineering would need several tens of thousands of wind turbines.

Dr Feldmann said: “Putting up such a wind farm and the further infrastructure in the Amundsen Sea and the massive extraction of ocean water itself would essentially mean losing a unique natural reserve. Further, the harsh Antarctic climate makes the technical challenges difficult to anticipate and hard to handle while the potentially hazardous impacts to the region are likely to be devastating.”

This “gigantic endeavour” is meaningless unless the Paris Climate Agreement is kept and efforts put into reducing climate emissions rapidly.

However, the scientists who are not involved in this study have raised concerns about the findings. Dr Robin Smith from the University of Reading said that entire Britain could be covered up to a depth of 30 meters and more with the amount of water needed.

“Elevating and distributing the ocean water would mean an unprecedented effort for humankind in one of the harshest environments of the planet,” he said.

“So although such a large-scale geo-engineering scheme is not utterly impossible, reducing greenhouse gas emissions as quickly as possible is clearly still the most reliable way to reduce the many harmful effects of climate change.”

Dr Jeffrey S Kargel from the Planetary Science Institute dismissed the proposal finding it as absurd as moving people to Mars to get rid of the troubles on the planet caused by humans.

He said it could give “gullible people and manipulative politicians and those with vested interests in fossil fuels a sense that we can just keep burning fossil fuels on an expanding scale; then if things get too bad climatically we can engineer our way out of trouble.”

He added: “The visionary thinking we need most of all is what we can do to take our civilisation off dependence on fossil fuels.”