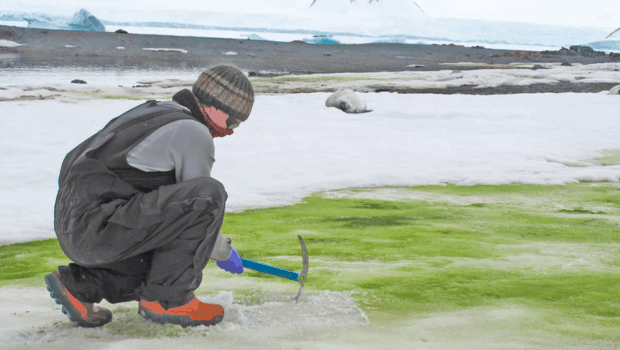 Climate Crisis Triggers The Spread of Green Snow in Antarctica

Coastal Antarctica has experienced a curious phenomenon of green snow over the last few years, all caused by the climate crisis. The green snow that covered parts of its shores is spreading farther inland.

A new study published in the journal Nature Communications on Wednesday discovered that the microscopic algae bloomed on the surface of the snow had caused green glow in the snow, according to CBS News.

As per the researchers from the University of Cambridge in the UK and the British Antarctic Survey, the algae will spread because warming temperatures are heating the planet and are creating more of the slushy conditions that are required by the algae to thrive, according to The Guardian.

The visibility of bright green shine where the algae are at their most dense, change the appearance of the snow, and it is also visible from space. Also, the scientists say, as the algae spread, it will attract other species to feast on it as a potent source of nutrition, as The Guardian reported.

The researchers looked at satellite data gathered between 2017 and 2019 to conduct the study and combined it with on-the-ground measurements over the past two summers in Antarctica.

According to CNN, this process allowed the scientists to map the microscopic algae bloomed across the snow of the Antarctic Peninsula. The data was obtained from the collected images of the European Space Agency satellites along with the measurements received from Antarctica’s Ryder Bay, Adelaide Island, the Fildes Peninsula, and King George Island.

Since the data only included green algae, a conservative estimate is reported. As the satellite is capable of picking up green only, the data ignored the accompanying red and orange algae.

“We now have a baseline of where the algal blooms are and we can see whether the blooms will start increasing as the models suggest in the future,” said Matt Davey of the University of Cambridge’s Department of Plant Sciences to Reuters.

Besides mosses and lichens, that are the dominant plant species in Antarctica, 1,679 separate algal blooms were identified by the new mapping. These are a vital component in the carbon dioxide capturing ability of the continent from the atmosphere, as Reuters reported.

“The algal blooms in Antarctica are equivalent to about the amount of carbon that’s being omitted by 875,000 average UK petrol car journeys,” Davey said to Reuters. “That seems a lot but in terms of the global carbon budget, it’s insignificant. It does take up carbon from the atmosphere but it won’t make any serious dent in the amount of carbon dioxide being put in the atmosphere at the moment.”

The green snow appears along with the “warmer” areas of the Antarctic coast, wherein the summer reaches the average temperatures just above freezing.

The excrement of marine birds and mammals serves as an effective fertilizer and strongly influences the distribution of green snow algae, the researchers found. More than 60 percent of blooms were found near penguin colonies, and others near nesting sites of the birds, according to CBS News.

“This is a significant advance in our understanding of land-based life on Antarctica, and how it might change in the coming years as the climate warms,” said Davey in a press release.

The algae need the supply of ready water to flourish, which will be in abundance as the planet heats up and snow on the Antarctica Peninsula melts.

“As Antarctica warms, we predict the overall mass of snow algae will increase, as the spread to higher ground will significantly outweigh the loss of small island patches of algae,” said co-lead author Dr. Andrew Gray, of the University of Cambridge and the University of Edinburgh, as CBS News reported.

And more snow will melt with the help of algae.