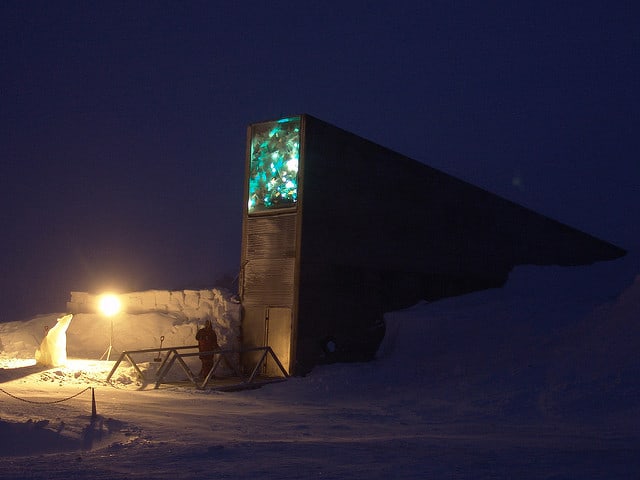 The climate change has already altered the “Doomsday Vault,”-the seed ark, making it one of the few places which are considered as the locus for the anxiety of the humans for the climate change. Embedded deep in the permafrost of a northerly Norwegian island, it stores about a million samples from the whole world to keep them safe in the event of war, famine, disease and of course climate change. It is the back up for the gene banks worldwide-“a fail safe for the fail safes.”

The vault is meant to be indestructible to protect the genetic material, and the frigid landscape acts as the natural coolant of the vault’s materials. Surprisingly, the climate change affected this region significantly causing melting of permafrost, avalanches to strike and freezing of water collected at the beginning of the tunnel to the vault on a notable occasion.

The vault is expected to be fine. However, occasional problem signals grave situation and the warming climate is causing a rapid change in its home.

The Norwegian Center for Climate Services released a report on climate change in the Svalbard archipelago this year which has been commissioned by the Norwegian Environment Agency stating that “from 1971 to 2017, a warming of 3-5 degrees Celsius has been observed … with the largest increase in winter and the smallest in summer,” – 8.7 degrees Celsius is the estimated average temperature for Svalbard.

IngerHanssen-Bauer of the Norwegian Meteorological Institute and one of the editors of the study said: “We know that the warming in this area has been very fast during the last five decades, seen in a global perspective.”

Glaciers of Svalbard are “losing more ice through melting and calving than they are accumulating through snowfall,” according to the report. “All of the well-observed glaciers are shrinking.” The warming of the surrounding ocean “has halted sea ice from forming.”

The changes from a period of 1971-2000 until 2071-2100 depending on the various scenarios set out by the Intergovernmental Panel on Climate Change (IPCC) for global warming has been projected by the report. “Under medium to high scenarios for future climate emissions,” the scientists found that high emissions will increase the annual air temperature by approximately 10 degrees Celsius and medium emissions around 7 degrees Celsius.

As per the report, there will be drastic changes in the region due to the increase in temperature. Further, there will be more frequent avalanches, heavy rainfall, and mudslides whereas season of snow will be shorter. In the case of high-emission, it is predicted that near-surface permafrost will melt in low-altitude and coastal areas.

The report does contain a caveat. “Inadequate knowledge of the climate system’s sensitivity and of future natural climate variations, as well as limitations in the climate models, lead to large uncertainties in the projections even under a given emission scenario,” the scientists wrote. “It is still clear that reduced greenhouse gas emissions will lead to reduced changes in the physical climate.”

The Svalbard archipelago is home to Longyearbyren, one of the northernmost human settlements on Earth, and midway between the mainland of Norway and the North Pole. It is Arctic explorers’ hub and home to the Global Seed Vault. The city is experiencing occasional disasters and anomalies because of the changing climate.

See also  How Eco-friendly Products Can Improve Your Home

As per the CNN report, melting of the permafrost destabilizes the foundations of houses, and those are already cracking and shifting. There will be more frequent avalanches like the one which killed two people in 2015 and injured nine unless emissions get controlled according to the Norwegian report.

A 2018 Arctic report card of the National Oceanic and Atmospheric Administration’s showed that “continued warming of the Arctic atmosphere and ocean are driving broad change in the environmental system in predicted and, also, unexpected ways,” and Arctic’s surface air temperatures were warming at “twice the rate relative to the rest of the globe,” among other concerning changes.

The IPCC has clearly projected as to what catastrophes the planet is going to face unless global emissions are curbed within the next few years. Considering the global nature of the problem, the possibility that international politics can mire the proposed solutions cannot also be ignored.