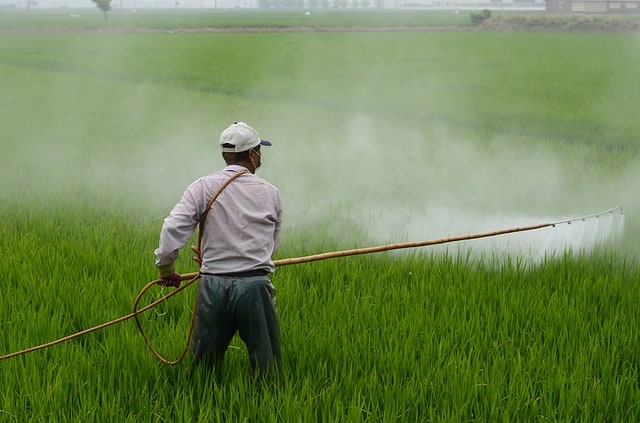 Biomagnification is also known as “biological accumulation” refers to the process by which certain toxic substances such as mercury and pesticides find their way into the environment like water bodies and gradually move up the food chain in much higher concentrations. In simple terms, it refers to “the accumulation of elements and compounds of harmful substances in the tissues of living organisms.”

Nonexistent or reduced levels of internal degradation and excretion of some toxic substances as a result of an inadequate amount of water are also another cause of accumulation. Herein, the article seeks to address the causes of Biomagnification, its effects, and the solutions.

The chemicals used in the agricultural sector contain highly toxic substances that mainly result in biomagnification. These chemicals include herbicides, pesticides, fungicides, and inorganic fertilizers. These chemicals penetrate into the soil where they accumulate to toxic levels and also find their way into the rivers and lakes through surface runoff during storms.

The industrial effluents and wastes from agriculture industries also contribute to Biomagnification. These chemicals used in the farms or released in industries contain traces of heavy metals namely, lead, copper, arsenic, mercury, and cadmium.

In the tissues, they accumulate to toxic levels that may cause adverse health effects and transferred to the next trophic level upon consumption, gradually move up the food chain in much higher concentrations.

Organic substances such as biosolids and manures have essential nutrients that are used by plants such as nitrogen, phosphorous, and carbon. Excessive use of these substances can be harmful and may cause eutrophication, which leads to excessive growth of water plants such as algal blooms that deprive the aquatic animals’ oxygen leading to their death.

Also, most of the organic manure is processed in industries that use a chemical to increase their nutrient value. The biosolids that are used in agriculture farms are treated using toxic chemicals that may contain heavy metals.

When these organic substances are released into the farms they release harmful substances that are absorbed by the primary consumers and later accumulate in other organisms.

Disposal of plastic waste near or in water bodies may not only be directly harmful to aquatic organisms but also other animals up the trophic level in general. Research shows that plastic contains a harmful chemical called Bisphenol A which is one of the major contaminants released into the water bodies.

Once in the body of the fish as well as the minute disintegrated plastic particles, they are taken up by other consumers that ingest the fish.

When mining substances such as zinc, copper, cobalt, lead, and other chemicals, these mineral deposits may be released into the aquatic and adjacent farm environment where their toxicity levels rise tremendously upon absorption by aquatic and farm animals or crops.

The release of gases into the environment can also contribute to Biomagnification. Exhaust gases from vehicles and industries that manufacture and refine oil into the air do not only cause air pollution but they can be dissolved by the rainwater and fall as acidic rain.

The chemicals in the acid rain are absorbed by soil and water bodies. They are then absorbed by primary consumers and later find their way up the food chain.

In recent years, the consumption of seafood has been linked to certain types of cancer. This is as a result of the accumulation of mercury and the Polycyclic Aromatic Hydrocarbons in the tissues of marine organisms.

Mercury is known to have an adverse effect on humans such as deterioration in the nervous system, impaired vision, hearing, gait, and speech, lead to involuntary muscle movements and corrosion of skin and mucosa.

In addition, consumption of plants or aquatic animals that have assimilated heavy metals and toxic substances may lead to long-term effects such as different types of cancers, Kidney failure, respiratory disorders, brain damage, birth defects and heart diseases.

Fishes that live in areas where pollution is rampant have shown traces of mercury, and lead which are highly toxic in the human body if ingested.

It is also important to note that consumption of seafood with high levels of mercury and lead by pregnant women can cause the child to be born with mental problems and in addition, mutations can also be caused by these toxic substances.

The ingestion and subsequent accumulation of metals in the tissues of marine organisms have an adverse effect on their development and reproduction. Consumption of heavy toxic metals in seabirds has an effect on egg production. The seabirds produce eggs with soft and thin shells which easily crashes as they try to incubate them.

Other cases that result from contamination of water bodies with toxic chemicals such as Selenium and mercury include damage to the reproduction systems of fish.

Few fishes would mean less food to other creatures that depend on them for survival. Polychlorinated biphenyls (PCBs) are highly concentrated in water bodies and have the same effect on aquatic animals.

Accumulation of substances that cause Biomagnification can disrupt the natural food chain that is essential for the survival of all animals in a given biosphere. The toxic chemicals found their way into the soil and water bodies as a result of runoff, they are then assimilated into the primary consumers’ tissues after consumption.

The primary consumers such as plants are then consumed by secondary consumers which in turn are consumed by other organisms. The chain continues up to the highest trophic level leading to Biomagnification.

However, if a group of organisms was to die due to the toxic substances the natural flow of the food chains becomes disrupted. This may have a long-term effect which might not be noticed in the short term.

1. Elimination of the use of some heavy metals

Heavy metals can be found in almost every industrially manufactured product such as petroleum. Therefore, toxic substances such as lead arsenic and mercury ought to be prohibited and completely eliminated and their usage in petroleum products and other industries banned.

Also, industries such as coal plants that produce and rely on various heavy metals should have preservation and wellsprings that will help in the reduction of this toxic substance. Meanwhile, the coal industry needs to come up with innovative strategies to eliminate mercury emissions.

Areas that have been exposed to toxic metals should be cleaned completely and expeditiously. The government should identify areas that are contaminated with solid wastes and also medicinal wastes incinerators and close those areas down.

They should then supplant them with waste decrease programs and carry out other programs that are aimed at treating and rehabilitating the soil for future use. The government should also ensure that offices, schools among other buildings that are occupied with human are not located near these areas.

Health sectors especially the dental departments should eliminate the use of mercury-containing items and use more secure alternatives. The government should also evacuate and securely store indoor regulators and thermometers that contain mercury.

They also have a part to play in unison with the schools to avoid providing leaded water to the children in schools and instead strategize on a better alternative of clean and treated water.

4. Be cautious about using treated wood

Woodwork industries should avoid the use of CCA and ACZA additives. These chemicals have arsenic which is highly poisonous. In homes built with such treated woods, it is impossible to remove the arsenic from the wood, however, a better solution would be to paint them with unleaded paints that are environmentally friendly. The paint minimizes filtering and contact. It is important to repaint if the wood paint deteriorates.

5. Watch out for the lead paints

Homes that were built before the 1980s are most probably painted with the toxic lead paints. In case the paints are peeling off a decrease laborer can be contracted to either redesign, repaint, or remove the aged paint from the walls.

6. Avoid usage of the PVC

When buying plumbing materials it is important to avoid the PVC. It contains lead that may contaminate the drinking water and the environment. If they are already installed an alternative would be to avoid drinking or using the hot water that rushes out of the tap after initially opening it because it contains lead traces. The best water is the icy cold one that pours after several minutes.

The cooking oil, grease, household chemicals, and medications should be disposed of properly. Also, when doing the laundry, phosphates bleaches, and soaps are recommended because they lack metal traces.