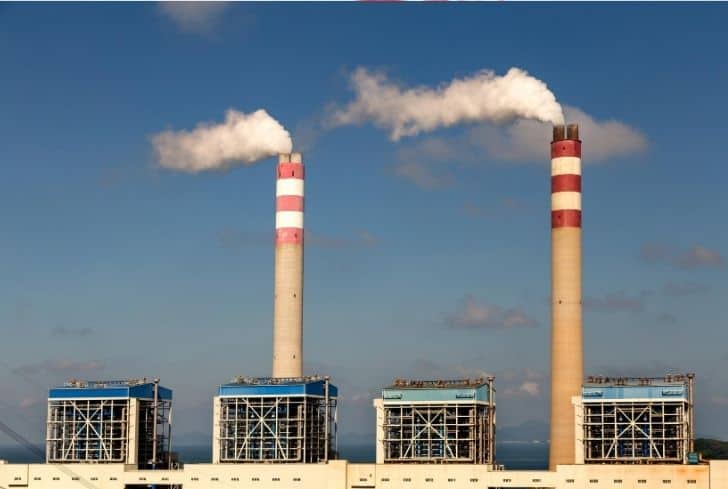 When someone thinks of pollution, the idea of thermal pollution often doesn’t come to mind. People will first think of things like carbon emissions, personal pollution and waste, and a variety of other changing factors.

However, thermal pollution is a real and persistent problem in our modern society. In layman’s terms, thermal pollution is when an industry or other human-made organization takes in water from a natural source and either cools it down or heats it up. They then eject that water back into the natural resource, which changes the oxygen levels and can have disastrous effects on local ecosystems and communities.

Thermal pollution is defined as a sudden increase or decrease in the temperature of a natural body of water, which may be an ocean, lake, river, or pond, by human influence. This normally occurs when a plant or facility takes in water from a natural resource and puts it back at an altered temperature. Usually, these facilities use it as a cooling method for their machinery or to help better produce their products.

Plants that produce different products or wastewater facilities are often the culprits of this massive exodus of thermal pollution. In order to properly control and maintain thermal pollution, humans and governments have been taking many steps to effectively manage how plants are able to use the water. However, the effects are still lingering today.

1. Water as a Cooling Agent in Power, Manufacturing and Industrial Plants

Production and manufacturing plants are the biggest sources of thermal pollution. These plants draw water from a nearby source to keep machines cool and then release it back to the source at higher temperatures. When heated water returns to the river or ocean, the water temperature rises sharply.

Different power plants are using water as their cooling agent for overly heated machinery. With that, the temperature of the water used to cool the machines increases, and as they are at such a high temperature, power plants send them back to the bodies of water where they got their supply from.

Other than different powerplants, the different petroleum refineries, pulp and paper mills, chemical plants, steel mills, and other industrial facilities also contribute a lot to thermal pollution. These facilities also use water to cool different machinery, and the wastewater at elevated temperatures is also dumped on different bodies of water.

Furthermore, desalination and nuclear plants also use a lot of water for machine cooling and dump a lot of radioactive waste into different bodies of water. The waste from these plants, which accumulates temperature easily, also causes changes in temperature in the bodies of water, leading to thermal pollution.

When oxygen levels are altered in the water, this can also degrade the quality and longevity of life in wildlife that lives underwater. This process can also wipe away streamside vegetation, which constantly depends on constant levels of oxygen and temperature.

By altering these natural environments, industries are essentially helping decrease the quality of life for these marine-based life forms, which can ultimately destroy habitats if they are not controlled and careful about their practices.

Soil erosion is another major factor that causes thermal pollution. Consistent soil erosion causes water bodies to rise, making them more exposed to sunlight. As bodies of water are more exposed to the sun’s heat, their temperature increases.

Other than the general soil erosion, once the streambanks are eroded as well, the vegetation cover within the stream might be removed, further exposing the water to the thermal radiation from the sun. With that, the increase in temperature in bodies of water is even faster.

Trees and plants prevent sunlight from falling directly on lakes, ponds, or rivers. When deforestation takes place, these water bodies are directly exposed to sunlight, thus absorbing more heat and raising their temperature.

Deforestation is also the main cause of the higher concentrations of greenhouse gases, i.e., global warming in the atmosphere. With higher atmospheric temperatures, bodies of water also accumulate higher temperatures even faster.

Urban runoff discharged into surface waters from paved surfaces like roads and parking lots can make the water warmer. During summer seasons, the pavement gets quite hot, which creates warm runoff that gets into the sewer systems and water bodies.

Natural causes like volcanoes, geothermal vents, and hot springs under the oceans and seas can trigger warm lava to raise the temperature of water bodies. Lightening can also introduce a massive amount of heat into the oceans. This means that the overall temperature of the water source will rise, having significant impacts on the environment.

Retention ponds can be another source of thermal shock because the bodies of water that are relatively small and shallow can absorb quite a bit of heat energy from the sun.

When that water is pumped directly into a river, lake, or bay, it causes a significant temperature increase. It is similar to pouring a hot pitcher of water into a bathtub full of water that causes the water to jump a few degrees Fahrenheit.

Domestic sewage is often discharged into rivers, lakes, canals, or streams without treating the waste. The temperature of municipal water sewage is normally higher than receiving water.

With the increase in temperature of the receiving water, the dissolved oxygen (DO) decreases, and the demand for oxygen increases, causing anaerobic conditions.

Thermoelectric power plants are usually built next to bodies of water in order to have a steady supply of water necessary for their production. The water being used by power plants is converted to steam in order to drive turbines for electricity generation.

With the sudden change in the temperature of the bodies of water where the wastewater is being dumped, the organisms are being disturbed and affected, causing further aquatic dilemmas that require long-term solutions.

As it is known, hydropower is harnessed by using a dam or diversion structure to alter the natural flow of a river or body of water. The kinetic energy from the constant movement of the flowing water is converted into electricity through the use of turbines and generators.

Even though hydroelectric power is a renewable source of energy, it still has some disadvantages, one of which is causing thermal pollution. The turning of steam-heated turbines increases the temperature of the water as they move continuously within the stream. With that, thermal pollution is being caused.

Among recognized scientists and scholars, there are generally two schools of thought when it comes to the effects of thermal pollution. Some lean on the side of the negative effects of this pollution on marine ecosystems and how it is detrimental to positive environmental practices.

However, some lean towards the idea that without these industries operating the way they do, some of the most fundamental parts of human life would be completely obsolete.

Wastewater would not be able to be properly maintained; we would have no industries that could produce the goods we needed; and so on. The effects of thermal pollution on ecosystems, however, greatly outweigh the benefits that industries have by participating in the act.

1. Decrease in DO (Dissolved Oxygen) Levels

The warm temperature reduces the levels of DO (Dissolved Oxygen) in the water. The warm water holds relatively less oxygen than cold water due to it being incapable. The decrease in DO can create suffocation for plants and animals such as fish, amphibians, and copepods, which may give rise to anaerobic conditions.

Warmer water allows algae to flourish on the surface of the water, and over the long term, growing algae can decrease oxygen levels in the water.

With the constant flow of high-temperature discharge from industries, there is a huge increase in toxins that are being regurgitated into the natural body of water. These toxins may contain chemicals or radiation that may have a harsh impact on the local ecology and make them susceptible to various diseases.

A dent in the biological activity in the water may cause a significant loss of biodiversity. Changes in the environment may cause certain species of organisms to shift their base to some other place, while there could be a significant number of species that may shift in because of warmer waters.

Organisms that can adapt easily may have an advantage over organisms that are not used to the warmer temperatures.

Many aquatic species are sensitive to small temperature changes such as one degree Celsius that can cause significant changes in organism metabolism and other adverse cellular biology effects.

Thermal pollution increases the metabolic rate of organisms as increasing enzyme activity occurs, which causes organisms to consume more food than what is normally required if their environment were not changed. It disrupts the stability of the food chain and alters the balance of species composition.

The warm water can also cause particular species of organisms to migrate to a suitable environment that would cater to their requirements for survival. This can result in a loss for those species that depend on them for their daily food as their food chain is interrupted.

Solutions to thermal pollution are required for its detrimental effects on the aquatic ecosystem in the future. A number of methods have been suggested and developed to convert thermal effluents from power plants into useful heat resources for maximizing the benefits. The solutions to thermal discharge into water bodies are as follows:

Cooling ponds or reservoirs are the simplest methods of controlling thermal discharges. In cooling ponds, heated effluents on the surface of water maximize the dissipation of heat into the atmosphere and minimize the area and volume of water.

This is the simplest and cheapest method that cools the water to a considerably low temperature. However, the method alone is less desirable as well as inefficient in terms of air-water contact.

After using water from water sources for cooling purposes, it is subsequently returned to the water body after passing through the condenser, which is termed the cooling process.

Therefore, cooling towers are designed to control the temperature of water to make the cooling process more effective. Cooling towers are mainly used to dissipate the recovered waste heat to eliminate the problems of thermal pollution.

Artificial lakes are man-made water bodies that offer a possible alternative. The heated effluents may be discharged into the lake at one end, and the water may be withdrawn from the other end for cooling purposes. The heat is eventually dissipated through evaporation. However, these lakes have to be rejuvenated continuously.

Industrially treated water can be recycled for domestic use or industrial heating that the problem of thermal pollution can be mitigated.

The thermal discharge (rejected heat) of power plants can be used for other purposes, like:

Most of these potential physical applications are applicable in colder regions or locations.

Above all else, the most important thing to consider is that the effects of thermal pollution greatly outweigh the human need for it to be done. Plants and industries have been able to find successful ways around thermal pollution, but many of them are not practicing it because it’s simply easier to work from the traditional model. If we want to promote the thriving environment that surrounds marine biology, then the attitude towards thermal pollution needs to take a drastic turn.

By being aware of the causes and effects, you can have a significant impact on how these plants choose to operate, and you can opt to make the change.