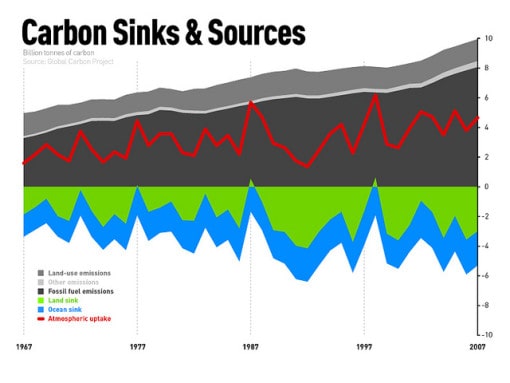 The carbon cycle or CO2 cycle is an important part of everyday life. Due to the abundance of carbon found in all elements of life, including animals, rocks, air, water, and more, the cycle of carbon is one that is constantly moving and changing due to the ever-changing nature of the things which carbon comprises.

Carbon is the fourth most common element found on the Earth and is responsible for the majority of human fuels and  is found in many different reservoirs. The majority is found in the lithosphere, which is comprised of rocks. The majority of carbon is stored in sedimentary carbonates and kerogens, with the rest with the rest being spread between the ocean, the atmosphere, biomass such as plants and animals, and fossil fuels. This is known as carbon storage.

You will die but the carbon will not; its career does not end with you. It will return to the soil, and there a plant may take it up again in time, sending it once more on a cycle of plant and animal life.
– Jacob Bronowski

Man-made activities like combustion of fossil fuels and heating of homes release carbon dioxide in the atmosphere. Respiration by humans and animals also introduce carbon into the atmosphere in the form of carbon dioxide. Plants have a process called photosynthesis that enables them to take this carbon dioxide from the atmosphere and water from the soil to form photosynthates (sugars, starches, carbohydrates, and proteins). Thus, carbon becomes the part of the plants.

Animals do not create their own food and eat plants or other animals to survive. The food they eat is broken down into sugars and starches by a process called metabolism. When the animals breather, the carbon dioxide is returned back to the atmosphere where plants use it again.

When both plants and animals die, they turn into fossil fuels which are made up of carbon over millions of years. This happens when decomposers like bacteria and fungi break down on to the dead plants and animals and release the carbon stored inside them. When we burn these fossil fuels, they come back to the atmosphere as carbon dioxide. Again plants will use carbon from the atmosphere and the whole process will start again.

Carbon moves about from one storage type to another through multiple pathways of exchange which is why the burning of fossil fuels contributes to global warming: carbon released from fuels kept under the ground becomes infused with the air in the atmosphere, leading to a warmer climate.. The most important pathways upon which carbon travels are the atmosphere, the ocean, sediments and fossil fuels, the biosphere and the breakdown of biomass, and the interior of the earth.

Carbon exchanges between several different reservoirs of storage through multitudinous biological, geological, chemical, and physical processes. These processes are known as the carbon cycle.

The carbon cycle is split into two main types of movement, known as fast and slow cycles. Here is a breakdown of how the two work.

See also  What is Fracking? Its Process and How Does it Work?

How Is The Carbon Cycle Changing?

The carbon cycle has always fluctuated and changed in response to major events such as changes to the climate. For example, when ice ages occurred in the past, the carbon cycle slowed down noticeably. When this happened, the coolness increased the growth of phytoplankton populations which added to the cooling effect on the earth. When the ice ages came to an end, the levels of carbon in the atmosphere rose drastically in response.

However, with the introduction of human industry, the carbon cycle is quickly becoming disturbed and its natural changes are being accelerated. The clearing of plants and the burning of fossil fuels releases more carbon into the atmosphere that should typically be released slowly, while not leaving behind the plants to absorb it.