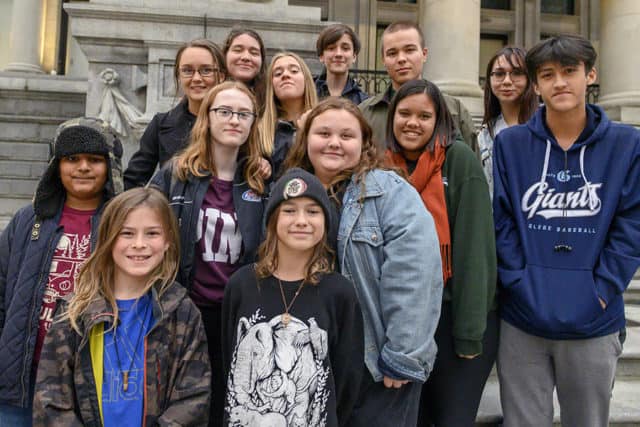 Fifteen Canadian children and teenagers sued their government for not addressing climate change and supporting fossil fuels, which, according to them, is jeopardizing their rights as Canadian citizens. These young plaintiffs are already dealing with the climate crisis, such as wildfires, flooding, and thawing permafrost to which their government is contributing.

Young climate advocates from all over the world are increasingly leading to public protests. This lawsuit, filed in federal court on Friday in Vancouver, is the latest.

“The federal government is knowingly contributing to the climate crisis by continuing to support and promote fossil fuels, and through that, they are violating our charter rights,” said Sierra Robinson, a youth climate activist and plaintiff of 17 in the case from Canada’s Vancouver Island.

“Our natural resources are at risk because of climate change, and as a young person, my rights are being violated disproportionately compared to older generations,” she said. “Since we can’t vote, we have to seek protection from the courts.”

The lawsuit between one of the plaintiffs, La Rose and the Queen of England, Canada’s official head of state, Her Majesty, the Queen, alleges that the Canadian government “causes, allows, and contributes to dangerous levels” of greenhouse gas emissions. As per the suit, the climate change effects that the youth are experiencing, including poor air quality and health hazards related to increased flooding, sea-level rise, thawing permafrost, and wildfires, the government is held responsible.

A lawsuit was also brought by young Americans, alleging the U.S. government for violating their constitutional rights as it failed to act on climate change and continues to subsidize fossil fuels. Both cases are filed based on a legal principle called the public trust doctrine under which specific natural resources are preserved for public use, and that the government must protect those resources. But some distinct differences lie there when it comes to legal precedents.

Chris Tollefson, a law professor at the University of Victoria and one of the lawyers representing the Canadian plaintiffs, said, “I think in many ways the issues in this case in Canada are issues that have not been grappled with or addressed to the same extent as they have in the U.S.”

For example, Tollefson said, the public trust doctrine is “a concept that in Canada is recognized but has not been analyzed to anywhere near the same degree” as in the U.S. “We are in a situation where there is a lot more new law to be developed here,” he said.

According to the young Canadian plaintiffs, ages 10-19, the climate change effects they are experiencing infringe on their rights to “life, liberty, and security of the person” under the Canadian Charter of Rights and Freedoms, and also their rights as beneficiaries under the public trust doctrine.

“People have waited patiently for government to act, but the reality is the government has not acted despite the promises that it has made,” Tollefson said. “Now is the time to bring this matter before the courts, so that the courts can encourage and require government to do a better job to fulfill its commitments under the constitution.”

The two conflicting interests of the Canadian government are: addressing climate change and developing the fossil fuel natural resources of the country, which includes Alberta’s carbon-intensive tar sands crude oil.

The government has taken measures for the reduction of carbon emissions, like placing a price on carbon. At the same time, it also subsidizes the development of fossil fuel. It purchased a crude oil pipeline to bring tar sands oil to market while the Trans Mountain pipeline’s expansion plan was in doubt. Earlier this month, in Federal elections, pro-environment politicians gained a slight victory, which was primarily seen as a referendum on current energy and climate policy.

Even if no one single action by the Canadian government constitutes a breach of the country’s charter, Tollefson said, the actions of successive governments have resulted in the breach.

“The record of this government and governments before, both in terms of supporting fossil fuels and at the same time failing to take action to address climate change, the totality of that does give rise to a charter breach,” he said.

Hours before a youth climate strike held in Vancouver in which Swedish climate activist Greta Thunberg was expected to speak, the Canadian suit was filed.

Thunberg and her school strikes for climate, has activated a global youth climate movement over the past year. In September, she, along with 15 other children from around the globe, filed a complaint with the UN Committee on the Children’s Rights over governments that failed to act on climate change. In another youth climate case last year, Colombia’s Supreme Court ruled in favor of young activists, and the government has to stop deforestation in Colombia’s portion of the Amazon and develop plans for land management to combat climate change. In the U.S., the climate case of the children is on hold at present, and a decision from a federal appeals court is awaited to move forward.

“What we are seeing is that this generation of young people is incredibly passionate about this issue, incredibly invested in it, and exploring ways politically, legally, and in other ways to make their voices heard,” Tollefson said.

The Canadian lawsuit claims that the government should develop a “climate recovery plan” to reduce greenhouse gas emissions in the country and do the needful what scientists say to stop climate change and protect the rights of youth.

“We want to stand up now and say that our future matters to us,” Robinson said. “We want our voices to be heard, and we want our climate to be protected for us in the future.”