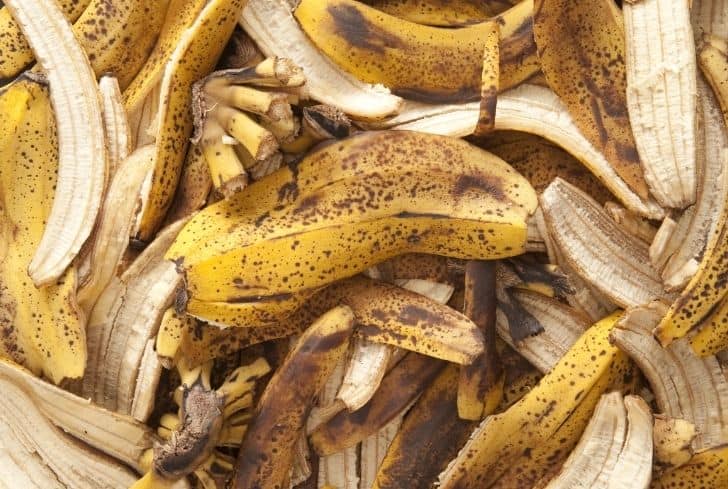 In a world where humans produce tremendous amounts of waste every day, we have become accustomed to the three Rs of saving the environment, Reuse, Reduce and Recycle. With that in mind, it is only logical to ask oneself, if some things, which are in fact wastes, can be reused or recycled. One of them is banana peels and this article will discuss reusing, recycling and composting banana peels, in an attempt to save the environment.

Can Banana Peels Be Recycled?

The answer to this is a sad no! The banana is a very popular fruit, with Sustainable America approximating that 3.2 billion pounds of bananas are eaten by Americans, which is approximately 304 bananas every second. Unfortunately, banana peels are food waste and are not recyclable.

There is much more to do with banana peels, such as composting them, but they are not supposed to be dropped in the recycling bin. If composting is not your first priority with banana peels, you can also choose to use them as shoe polish, to whiten your teeth, or remove warts. You can also feed your animals on them, use them as fertilizer for your plants, or use it to make vinegar.

Can You Put Banana Peels In The Compost?

Additionally, composting them is a very easy process. You simply need to toss the leftover peels into the compost. Although you can toss them in whole, be aware that they take quite some time to compost this way. To speed up the composting process, cut them into smaller pieces before tossing them into the compost bin.

See also  11 Incredible Benefits of Recycling That might Surprise You

Can Banana Peels Be Used As Fertilizer?

Definitely! Banana peels can be easily used as fertilizer. Banana peels provide calcium, magnesium, sulfur, phosphates, potassium and sodium, both to the composting pile and the soil, like nutrients.

Bananas are great potassium fertilizers that help in the development of strong roots and stem for plants, in addition to regulating enzymes in plants, as well as often being used as a pest repellent in gardens There are at least two ways to doing this:

The first is, as already mentioned previously, composting them. Banana peels are an excellent addition to plants as fertilizer. For optimum compost, add dried brown materials like dried twigs, dead grass, dead leaves, spent flowers and other organic matter to the composting pile, as they are a great source of carbon.

Next, chop the banana peels into small bits of about one inch or two, with a knife in the house. In addition to these, bring other fruit and vegetable peels from the kitchen and add them to the pile as part of the green matter. They are referred to as greens since they bring nitrogen to the process.

While in the composting bin or tumbler, add equal parts greens and brown material and once a week, turn and mix the pole so that there is enough oxygen going into the pile, helping the composting process along. After several weeks, when the compost is ready, add it as fertilizer to your plants and crops. The banana peels will provide your crops with potassium and calcium for proper development.

However, before throwing them into the compost pile, be sure to remove the tiny annoying sticky labels placed on food items with their origin and price. This is because they are made of vinyl or plastic, and although they are classed as food grade, they are neither biodegradable nor edible.

The second way to use banana peels as fertilizer is to add them directly to the plant. Simply dig up some soil around plants and place the peel in there to attract worms which do an excellent job of decomposing the banana peel.

Many books and websites argue that this is the best approach, rather than composting, but banana peels are best utilized as a fertilizer when they are composted first. Placing the peels directly on the soil or under the mulch can slow down the process which is only helpful if you want the plant to slowly take in the nutrients.

A third but less popular way of using banana peels as fertilizer is to add the banana peels to the potting mix or top layer of the soil by lifting the mulch around shrubs or potted plants. However, make sure the mulch is replaced. This type of fertilizing is called side dressing.

See also  Can You Recycle CD and DVD Cases? (And Ways To Reuse)

Can Banana Peels Be Put In A Garbage Disposal?

However, to be on the safe side, just avoid putting banana peels into the garbage disposal. The long answer to this is because banana peels are very fibrous, which puts a lot of strain on the disposal system. Banana peels, among other fibrous materials such as onion skins, corn husks, and artichokes, are designed by nature to protect the food inside.

How Long Does It Take Banana Peel To Decompose?

This is dependent on several factors, all of which can slow or speed up the decomposition process. According to Bovees, when you add worms into a traditional composting bin or vermicompost alongside full banana peels, the bin will get hot and the banana peels can breakdown over three to four weeks. Deschutes Land Trust Organisation estimates that the peels of bananas take up to 2 years to biodegrade.

However, SFGate acknowledges that banana peels do not decompose at a rate any faster or slower than other organic, green materials; the rate of decomposition is dependent upon the composting method.

They argue that a cool compost, which requires an individual to turn the pile every few weeks, could take several months until the compost reaches a crumbly, earthy, mature state. On the other hand, a hot compost, which is smaller and requires the composter to turn the pile at least once per day, can take less than a month before reaching maturity.

Simply soak a banana peel in a large jar of water, and combine one part of the resulting banana peel water with five parts of regular water in a watering can. This will fertilize indoor plants and will not attract insects or fruit flies.

Yes, this is a thing! You can get more nutrients, fibre, and antioxidants from the fruit by boiling the peel for about 10 minutes, putting it through a juicer, or by blending it with other fruits. However, be sure to clean the peel to remove any pesticides. Interestingly, eating the cooked peel along with the banana’s flesh is common in many Asian recipes.

See also  Is Wallpaper Recyclable? (And 9 Ways to Reuse Wallpapers)

3. Use them as shoe polish

Bananas contain large amounts of potassium, a key ingredient in shoe polish. As such, rub a banana peel on your leather shoe and wipe it off with a cloth for extra special shine.

You can also do the same on your jackets or furniture, followed by buffing with a soft cloth. Yes, you may smell like the potent fruit, but your shoes will look great! You can also blend the peel with water and use the mixture to shine silver.

Under the correct circumstances, banana peels break down quickly and add a lot of nutrients to the soil for vegetable and flower gardens. More on composting banana peels have been explained above in this article.

Try placing a piece of banana peel over that wart that you simply cannot get rid of. Do this every night and hold it in place with tape and within 2-3 weeks, it will disappear. You can also rub the peel over bug bites, poison ivy rashes or psoriasis patches, to help reduce itchiness and promote healing.

Just wrap a banana peel around your tomato. Doing this helps them absorb nutrients from the peel throughout the tomato season. More on using banana peels as fertilizer has been discussed above.

You can also get rid of banana peels by feeding them to animals. Add some ground, dried banana peels t the feed of chickens, pigs, rabbits, cows or other livestock and they will thank you later.

Adding a ripe banana peel to a roasting pan helps keeps the boneless and skinless cuts of meat from toughening up and drying out during cooking. Give it a try before throwing the banana peels away.

You can use the sour flavor of banana-peel vinegar on salads to flavor water and tea or in any recipe that calls for vinegar.

Despite the various ways of using and reusing the banana peel, you will find most of them headed to the landfills, mainly because 12% of a banana’s weight is in the peel. Discarded peels end up in landfills in staggering amounts, which contributes to methane gas, a greenhouse gas 21 times more potent than carbon dioxide.

The EPA suggests that uneaten food, which in this case could also include banana peels, accounts for 20% of methane emissions, a major contributor to global warming. Therefore, before sending the peels to the trash, find one or more uses for them as illustrated in this article.