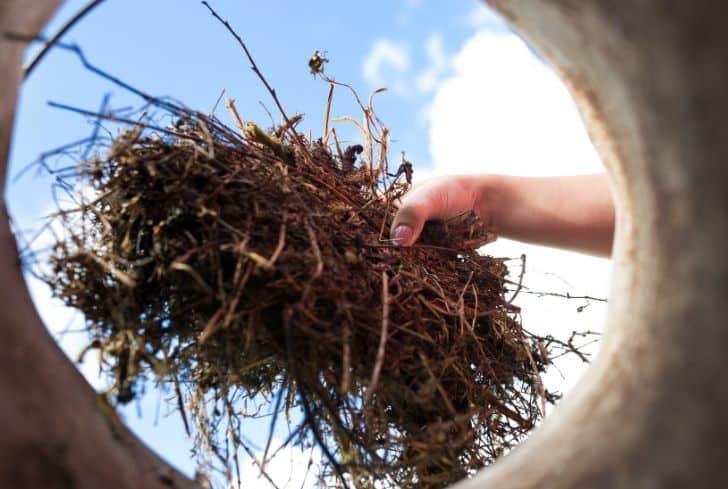 There are many things that describe or characterize mammals, and one of them is hair. Hair grows all over the human body, except for a few areas, like the soles of the feet, the backs of the ears, the lips and other areas, and continues to do so until death. Hair growth and development is because of a protein known as keratin, meaning as long as there is life, the hair will continue growing.

Cutting or trimming hair is the easiest way of taking care of it. However, where do you take the cut hair? The environmentally-conscious people will therefore seek to know if hair can be composted, and this article will look into this topic in depth.

Can Hair Go In Compost?

Yes, you can compost hair.

At the heart of composting, compost is nothing more than broken down organic materials. When these organic materials that break down to their most basic components are added to the soil, they add the required nutrients to the soil, help it retain water in sandy soils, and add drainage to dense clay soils.

The basic formula for creating compost is to layer green or moist ingredients with brown or dry ingredients, along with other requirements such as air. Brown compost ingredients include dried leaves, twigs, and shredded newspaper, and when they break up, they release carbon into the mix.

Green components, such as kitchen waste, freshly cut grass, pulled weeds add nitrogen to the mix and to the soil. Hair is part of these green components.

Human and pet hair is compostable and contains high levels of nitrogen, making them ‘greens’ when composting. Hair also contains oxygen, carbon, hydrogen and sulfur, which is the same as a Bone meal.

Modern studies have shown that waste human hair from hair salons mixed with compost is a good source of plant nutrients. All hair works the same way, so both pet and human hair will work the same way. Adding hair to compost is as simple as sprinkling it in among the other green ingredients when you add that layer.

However, the hair will break down easier if you spread it out instead of dropping it in large clumps. To speed up the decomposition process, you may place a tarp over the top of the compost pile. As it will help retain both heat and moisture necessary for these materials to break down.

Also, remember to turn the compost, or turn the compost tumbler a few times at least once per week, to mix everything as well as keep the contents aerated. In doing so, the composting process will take about a month for the hair to break down enough to be added to your garden.

Does Hair Decompose In Soil?

Of course, hair breaks down in the soil. If you decide not to go the composting route with your hair, it is perfectly fine since the hair will naturally decompose in the soil. In fact, some researchers have found luscious locks and grizzled beards have more nitrogen than manure and can make a great, natural replacement for traditional fertilizers and herbicides.

The decomposition of hair is dependent on several factors, such as the local environment and microbial life, but in general, it takes more time than most tissue. This is primarily because of its molecular structure.

Hair is made up of a protein known as keratin, which is fairly resistant to decomposition by proteolysis, or protein decomposition. As such, there is not a uniform speed at which hair can decompose.

Although if the environment, microbial life and internment methods favor decomposition, it will be relatively quick. If the factors do not favor the process, hair can take tens of years before decomposing. There has been evidence of hair on human remains, professionally excavated, approximately 100 years since burial. Hair has also been found on far older mummies.

Is Human Hair A Good Fertilizer?

Yes, a human hair is an excellent fertilizer. As already mentioned above, some researchers have found human hair to contain more nitrogen than manure, making it a viable option and a natural replacement for traditional fertilizers and herbicides. Hair can be composted before being added to the soil, or be added directly, without composting.

Composting breaks it down in about a month. Adding the hair directly to the soil, however, does not mean it will break down quite easily that fast. It can take up to two years to decompose completely if used as a fertilizer.

Using un-composted hair as a fertilizer can help improve the quality of the soil by slowly releasing nutrients such as nitrogen to that soil. On an unplanned note, the hair can also provide structural support for roots and help break up thick or clay soil.

In a research at the Mississippi State University, Zheljazkov, et al. found that plant yields increased for hair-fertilized plants compared to the untreated controls overall, although were still lower than for the commercial, inorganic fertilizers in lettuce and wormwoods, which are fast-growing plants.

The researchers suspect that some of the difference between hair and inorganic fertilizers is due to the time it takes for the hair to degrade and release its nutrients. Therefore, in conclusion, hair should not be used as a sole fertilizer, at least for fast-growing plants

See also  Can You Compost Corn Cobs? (And Corn Husks?)

Is Dog Hair Good for Compost?

Certainly. Not only is dog hair good for compost, but also other pet furs, like a cat’s fur. Pet fur, like human hair, is full of nitrogen, one of the two main components required in a compost pile. All your pet’s fur, left behind on your floors or after a dog groomer visit, can come in quite handy in a compost pile, rather than grossing you out.

Once you scoop it all up in your vacuum or dustpan, head on out to the compost pile and dump it straight in. However, be sure to sort it out after vacuuming, because you might also vacuum synthetic fibers of the carpet, which do not break down in the compost, but rather contaminate the compost and subsequently, the soil.

Some composters may prefer not to compost hair from dogs immediately after they have been treated with a topical flea or worm treatment, that is normally applied to the back of their neck. The reasoning for this is self-explanatory; the treatment contains chemicals, that might be passed on to the soil, contaminating the soil, the plants and subsequent bodies of water.

Therefore, if there is a dog groomer in the neighborhood, offer to take the dog to have its hair clipped. Bring the clippings to your compost for some extra nitrogen. Oh, by the way, pet fur includes cat fur, which can also be used.

Yes, there is scientific evidence that proves that hair can help plants grow. One of the many factors that aids in the fertilization and growth of plants are the presence of nitrogen. It aids chlorophyll in providing new growth and aiding older plant growth with a supplement. It is for this reason that most fertilizers have a high nitrogen content, or are nitrogen-based. Hair contains much higher amounts of nitrogen than manure.

In the aforementioned research by Zheljazkov, et al., they compared the productivity of four crops: lettuce, wormwood, yellow poppy, and feverfew. The crops were grown in commercial growth medium using untreated control, non-composted hair cubes at differing weights, a controlled-release fertilizer and a water-soluble fertilizer.

They found that with the addition of hair waste cubes, yields increased relative to the untreated control but were lower than yields in the inorganic treatments, suggesting that hair waste should not be used as a single source for fast-growing plants such as lettuce. They further attributed the relatively slow growth to the fact that hair takes quite some time to decompose. However, according to Zheljazkov,

“…once the degradation and mineralization of hair waste starts, it can provide sufficient nutrients to container-grown plants and ensure similar yields to those obtained with the commonly used fertilizers in horticulture.” (pg. 595)

Another way in which hair helps plants grow is through the Florida-based company, SmartGrow. They sell biodegradable mats made of human hair, which also double as weed barriers. The mats easily fit in the bottom of potted plants, but can also be used as topsoil.

The company claims that using the mats as topsoil makes a great replacement for traditional herbicides by helping to prevent weeds. They also add that as the mats grow bigger, greener plants with faster growth and more blooms can be achieved. Furthermore, their mats are made up of 15% nitrogen and retain four times more water than standard soil.

Does Human Hair Affect the Growth of Plants?

Overwhelmingly, No. Hair has no adverse effects on the growth of plants. In the study above, which has been referenced by so many articles, both lettuce and wormwood, the psychoactive ingredient in absinthe, grow about as well with hair as a fertilizer as they do with chemical fertilizers. The plants can use about 50% of the nitrogen contained in the hair.

As such, hair has a positive effect on plants, through which it produces the nitrogen required by plants for their growth. There is only one downside to using hair on plants: it takes quite a while to start decomposing and releasing the nutrients into the soil, meaning it has to be paired with more fast-acting fertilizers.

As Zheljazkov notes,  “…once the degradation and mineralization of hair waste starts, it can provide sufficient nutrients to container-grown plants and ensure similar yields to those obtained with the commonly used fertilizers in horticulture.”

Although hair has no adverse effects on plants and their growth, one this is important to bear in mind is that hair, especially hair from salon floors, may have all sorts of inorganic creams, sprays, dyes and other products.

Nothing is mentioned about the effects of such sprays, dyes or other products in the hair on soil, plants and plant growth, but it is safe to say they will have a not-so-positive effect on the same. It, therefore, translates that you ought to take care before using any type of hair available on your plants or for composting.

At the same time, avoid using any and all pet fur or hair, just because it is good as human hair for fertilizer. Some of the animal fur or hair might still contain trace amounts of chemicals especially immediately after the pets have been treated with a topical flea or worm treatment, that is normally applied to the back of their neck.