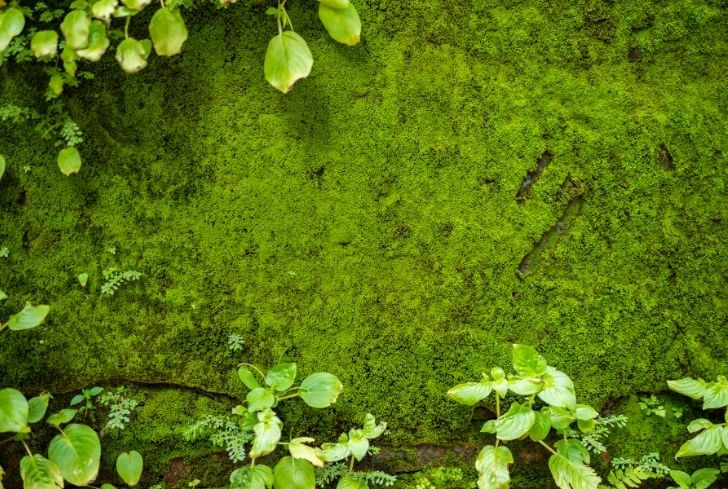 If you walk into any forest in the world, you are bound to see similar items, regardless of continent. You will find trees, a relaxing environment, some monkeys and other animals, fallen trees and of course a green carpet on forest floors, known as moss. They are vital for controlling soil erosion and releasing nutrients for complex plants that succeed them

Moss exists environmentally all over the world, on land and in water, except in salt water and is characterized by moist shady locations. The vegetation might not have a lot of direct benefits to humans, but might be composted and help out elsewhere. This article has more on composting moss and if it can serve as a good fertilizer.

Can You Put Moss in the Compost?

Yes, moss is compostable and should end up in the composting bin. Moss is normally removed from laws through raking and ought to be composted. It is slow to break down because of its high lignin content, meaning it could take three years or more before it completely decomposes in the bin.

The suggestion to beat, therefore, is to compost it in a separate bin. It can also decompose slowly if added in bulk. Therefore, add it moderately or mix it with plenty of other ingredients. Luckily, moss can be stored and added gradually as other ingredients become available.

The unfortunate thing with composting moss is that there is the risk of it surviving in the composting environment and continuing growing rather than dying and decomposing. Well, it decomposes quite well especially if mixed in with other materials and will decompose.

You can also hot-compost moss, as long as it is in relatively small quantities, is mixed well with other waste materials and the temperatures are between 40°C and 60°C. it is also recommended that dead grass be added at the same time to compensate for the high lignin content of the moss.

Moss spores could survive cold composting and that is why it is recommended to store the moss in a separate bin and add it gradually as other ingredients become available, ensuring the complete decomposition of moss. However, in hot compost, the moss will be eradicated and will not regrow inside the composting bin, like in a cold compost.

See also  Can You Compost Ginger? (And Ginger Peel?)

Moss can be of positive benefits to plants when applied directly as fertilizer or after being composted. It is a green material, meaning it will add nitrogen to the composting process as well as to the soil.

Unfortunately, composting moss is a bit complex and is slightly not the same as composting other scraps. It is suggested that the moss should be added to the bin in small amounts, for instance after the spring maintenance scarification. Mixing the moss at a ratio of 1:4 with other greens, such as grass mowing, is highly recommended.

Is Moss Good for Plants?

Moss is amazing for plants. It occurs naturally in forest-like conditions and can help other plants grow. It is also good as it helps potted plants absorb and retain water and nutrients, aiding them in growth.

When the soil is dry, potted plants can lose valuable nutrients and using moss helps the soil retain the water and nutrients as close as possible to the plant’s roots.

It also helps accelerate the benefits given to humans by potted plants, like removing dangerous toxins and increasing oxygen levels, thereby keeping the plants healthy and robust.

Moss is also the first to grow on rocky lands and can help in breaking down rocks and the soil, creating an environment where regular plants will grow. They also absorb moisture, acting like sponges, preventing soil erosion. In Japan, many gardeners grow moss to create gardens that look ancient, peaceful and are calming the soul and senses

Moss is actually like an indicator. It can communicate something to you so that you take action. Despite being opportunistic, moss is not aggressive and does not harm your lawn or garden. Whenever it becomes a problem in your garden or lawn, it is indicating an underlying problem that you should investigate.

Moss tends to grow where the soil is very compacted, the drainage is poor, the soil stays very wet for periods, where it is shaded, or where the fertility is poor or a combination of these conditions.

Acidic soils also favor the growth of moss and so if you are constantly experiencing a moss issue, investigate your garden as it might have one or a combination of more than one of these issues.

It might also be a reason why some of your plants are not doing well on that lawn or garden. Regardless, moss should not be controlled using chemicals as it will not harm other plants, but will only be telling you to correct any drainage or compaction problems.

Is Moss Good For the Environment?

Oh, yes, moss is good for the environment. Remember that this plant occurs naturally all over the world under conditions that can arise anywhere. Understand that moss is a chemical-free way of growing other plants, either as direct fertilizer or after being composted.

See also  Can You Compost Pistachio Shells? (And Are They Biodegradable?)

1. It eliminates the need for chemical fertilizers

As a gardener or landscaper, you will not need to rely on poisonous and polluting chemical fertilizers to supplement your soil. Moss encourages growth and ‘eats’ dust particles that could hamper the growth of plants.

When you have a lot of moss, you can also compost it or apply it as fertilizer, enriching the soil without the need for chemical fertilizers.

2. It acts as a home for others

Beneficial insects, salamanders and frogs live in moss colonies, meaning that moss also acts as a home for other naturally occurring beings. In fact, reindeer have been documented eating reindeer moss, although it is a lichen and not a true moss.

Moss helps in water conservation especially today where annual rainfall levels are decreasing due to climate change. Moss collects moisture and water and then helps plants absorb and retain the same water and nutrients, aiding them in growth.

When the soil is dry, the plants will require moss to help the soil retain the water and nutrients as close as possible to the plant’s roots.

Many moss species are guardians of the soil and keep it from washing away. Polytrichum commune, an upright grower, can be planted on steep hillsides in nutrient-poor soil. This species is an excellent solution to erosion concerns even in sunny locations. Its long rhizoids steadfastly hold red clay, gravel, and sandy substrates in position.

5. Filtering out chemicals in water

Mosses can be very useful in addressing the toxic discharge of undesirable elements like silver, copper, cadmium, mercury, iron, antimony, and lead. Moss can also filter out organic substances such as oils, detergents, dyes, and microorganisms from our rivers and streams

Mosses can also help reclaim land at abandoned sites where mining previously occurred. Many moss species are tolerant of heavy metal toxins and can reappear in such contaminated sites without too much effort. They will sit in these abandoned sites and help restore such landscapes.

Mosses play a vital environmental role in the global carbon cycle as the largest land repository for carbon on the planet. A species known as Sphagnum peatlands, present in more than 60% of the world’s wetlands, is known to soak up vast amounts of carbon dioxide from the air, far exceeding the rate of carbon sequestration by all rainforests combined.

Is Moss a Good Fertilizer?

Of course, moss is an amazing fertilizer. When used on soils, the soil will improve in different ways. Peat moss, in particular, is low in nutrients but is a much-valued addition when composted. Peat moss in particular helps the soil hold nutrients by increasing the cation exchange capacity (CEC).

See also  Can You Compost Eggshells? (And Cooked Eggshells?)

It also has a low pH and is therefore ideal for acid-loving plants like blueberries and rhododendrons. When composted, the compost has a neutral or slightly alkaline pH, meaning it will be generally okay for all other plants, except those that love overly alkaline soils.

Peat moss also does not compact and can therefore last for years in the soil, providing good aeration and water holding. Whether composted or not, peat moss holds water helping with a plant’s growth. It also contains a few microorganisms, which are beneficial for improving the soils in many ways, from aeration to nutrition.

Peat moss also can retain 20 times its weight in water. When added to the soil as fertilizer, it will help aerate and enrich the soils and can add body and help retain valuable nutrients that would otherwise leach out in sandy soils.

It also prevents clay soil from hardening which can prevent adequate water absorption by plants. Its composting ability helps add nutrients to the soil for plants to slowly absorb. It is the ideal fertilizer rather than the expensive, polluting and chemical-filled fertilizers.

You only need to add 2 inches of peat moss to 6 inches of garden soil, to help the surrounding plants by working as an ideal natural soil additive and slow-release long-term fertilizer.

Dead moss will decompose quite easily. If you have been going through this article from the beginning, you will realize that it was recommended that you store moss in a separate bag, as it can take quite some time to decompose on its own.

Therefore, by placing it in a separate bag, it will die and will be composted with a lot of ease. Moss does not have roots and will therefore not regenerate like other plants like ivy. Dead moss is fibrous unlike a dead weed which is 70% water and will not just wither and gradually shrivel away

Can Moss Grow Without the Soil?

Of course, moss can grow without soil. In fact, the majority of moss grows on surfaces other than soil. They include bricks, stones, rocks, and fallen trees. it is very low maintenance and only requires shade and moisture to thrive.

It does not have roots but rather obtains its nutrients from moisture when sitting on any surface. It does not put down roots and therefore spreads across a damp surface absorbing nutrients that have dissolved in the moisture on the surface. The surface need not be soil only but could be anything, including damp roofs.