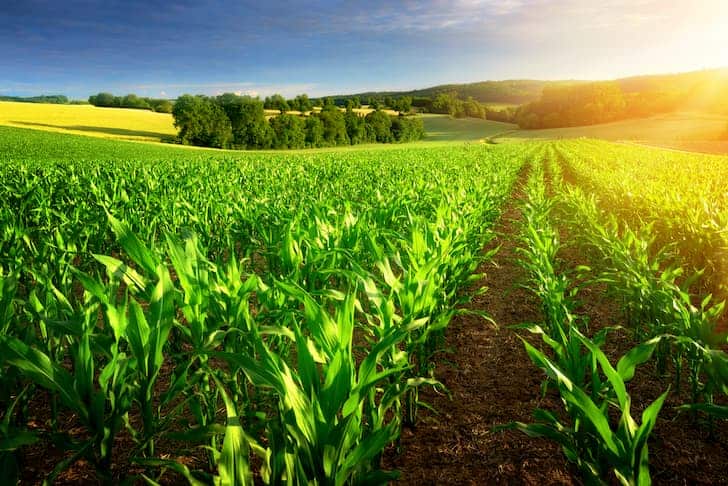 Biointensive farming is an organic system of agriculture, where farmers focus on achieving the maximum yields, from the existing limited pieces of land, while at the same time, increasing biodiversity as well as maintaining sustainability and fertility of the soil. The Food and Agriculture Organisation of the United Nations, for instance, estimates that only 11% (1.4 billion hectares) of the world’s land surface is used for crop production.

It is also speculated that there is no more, or at least very little land to bring under cultivation. Therefore, this means the world population has to use the little available land to produce more, leading to bio-intensive farming. The farming method’s objective is sustainability on a closed system basis.

It works with the basic elements needed for healthy crops and growth, which is the sun, soil, air and water, to achieve maximum yields, while at the same time increasing biodiversity and the fertility of the soil.

Importance and Benefits of Biointensive Farming

1. We Only Have a Little Time

There may be as little as 40 years of farmable soil remaining all over the world. For each pound eaten by humans, between 6 and 24 pounds of soil are lost to agricultural practices like wind and water erosion. Biointensive farming will make the best of the little soil we have and will prolong this period.

2. Can Help Combat the Dwindling Crop Production Due to Global Warming and Climate Change

Biointensive farming maintains soil fertility by allotting about 60% of what is grown to compost crops. Focusing on this form of farming can ensure that both the gardener and the soil are adequately fed and that the farm remains sustainable.

4. It Makes For More Farmers

Farmlands are becoming less productive and is making the number of farmers decrease globally. Many people want to farm but are facing several challenges like the affordability of land and equipment necessary for the modern farmer.

Biointensive farming makes room for more farmers since it’s a practice that does not need a huge chunk of land to farm. It can even be done in the backyard.

5. It is Better Than Conventional Farming

Besides every advantage known about conventional farming over biointensive farming, the latter one beats the former in various ways, especially regarding the key farming or gardening inputs. Conventional farming heavily relies on petroleum and natural gas, resources that are running out.

See also  Is Coconut Oil Bad For The Environment?

This, therefore, means the conventional way of farming will become more expensive and food prices will go up. Biointensive agriculture is an avenue of avoiding this inevitable fate and will equip the modern-day farmer with all the tools that can help save the soil, resources and our own lives. Biointensive farming uses 50 to 75% less land and 50 to 100% less fertilizer to produce enough food.

6. It Saves the Limited Remaining Amounts of Seeds

About 95% of the seed varieties ever grown in agriculture are now extinct. This is primarily because of the use of hybrid seeds and the growing of relatively few crops. Biointensive farming works well with open-pollinated seeds, which are seeds that can be naturally pollinated, by insects or wind, rather than hybrids.

It, therefore, saves on the amounts of open-pollinated seeds that are currently available and ensures their continued existence for a long period to come.

7. It Can Save More Land For Other Uses

Biointensive farming requires a lot less farming land in comparison to traditional forms of farming. Because of how this form of farming requires less land to produce the same yield of crops as conventional farming, more land could be saved for other uses. If the system is used globally, at least a third of the world’s acreage could be left for the preservation of plant and animal diversity.

Growing lettuce and similar crops is an example of biointensive farming. It helps shade the soil, blocks weeds, and they are, therefore, easy to grow. The farming technique should be used cautiously when growing tomatoes as they can shade one another from the valuable sun, and they will lack enough air circulation. To combat this, build an above-ground highway to make it easier for them to grow effectively.

The farming method is excellent for growing vegetables. It has been used since 2016 at La Fattoria dell’Autosufficienza to grow vegetables for the agritourism, direct sales and the Macrolibrarsi Store in Cesena, Italy. The team uses no fertilizer and the only treatment for parasites is prevention.

The process increases biodiversity, and soil quality while at the same time inviting beneficial microorganisms to thrive and take control over the soil, creating a dynamic harmony with the plants.

Growing marigold with tomatoes can be more beneficial than just for the provision of companionship. The process helps deter tomato pests, and other herbs like tarragon could also deter pests.

Pairing slow-growing large crops with fast-growing small crops is the best way to interplant. For instance, try growing cabbages and lettuce. Also try kale, a fast-maturing cool-season crop that can do very well with pole beans or tomatoes. Planting tightly while still allowing plants the room to mature, leaves less room for weeds while increasing the diversity of the garden.

It is the initial process where you loosen the soil down to 24 inches, although conventional farming methods typically loosen the soil up to 6 to 8 inches. Loosening the soil helps with aeration, as soil with good soil structure is composed of 50% air.

Therefore, this may require double digging, where you will loosen the soil in your beds up to 24 inches. This way, the soil aerates up to four times as deep and the roots of the plants will access more nutrients, hold more water, have more room to grow, and produce higher yields.

Instead of planting in rows, biointensive farmers grow plants in hexagonal shapes, as it is the most efficient form of packing thins in, in nature. Water crystals also come in the shape of a hexagon, and the same shape is used by bees in honeycombs. When the soil is properly prepared, and the plants are spaced together, roots will grow deeper and will increase yields from two to six times that of conventional agriculture.

When crops are grown hexagonally, they create a shade that allows for more water to be held by the soil, which is very crucial when there is little to no water. The style of planting also protects the soil from the harsh sun and inhibits the growth of weeds. It maximizes the amounts you will produce and will help you in getting the most out of the smallest space.

Biointensive farmers pile materials in their garden, rather than heaping it in distant piles. The compost might take longer to cure, but will become more diverse and produce more compost. Rather than bringing in outside manures, biointensive farmers grow their compost and use about 60% of their growing area for dual-purpose crops, which grow both food and compost.

Adding compost to the beds helps in adding nutrients and organic matter, which is crucial to the crops and the microbes in the soil. Compost also unlocks nutrients previously unavailable through its hummic acids, making the soil even more fertile. It also holds water and less is lost to evaporation. Moreover, compost is good for holding nutrients, improving the soil’s structure, and buffering its PH.

It is an extension of growing compost. As plants grow, they harvest carbon dioxide from the atmosphere as well as through photosynthesis. They convert it into carbon bonds and create their plant bodies. When harvesting, the carbon in the bodies of the plants, acquired through the composting process, is transformed into a more stable form of carbon, or organic matter, and we put it back into the soil to fertilize it.

Organic matter feeds the soil microbes and balances the relationship between the plant and its root system. The best crops for this principle are millet, sorghum, barley, wheat and rye, as well as crops that have edible seeds like oats and quinoa.

Corn, sunflowers, and amaranth are also good for this, as they have a lot of brown or mature material, or structural carbon, which produces much more hummus, that can last up to 5000 years, as it is incredibly stable.

See also  Are Oil Heaters Energy-Efficient? (And Do They Catch Fire?)

Some of the crops mentioned above are rich in calories and while they provide the soil with long term fertility, they also feed. There are other crops with calorie-dense roots and include potatoes, parsnips, leeks and sweet potatoes, and they yield excellently in small areas.

The optimum balance of carbon crops and special root crops produce a nutritionally balanced diet in minimal space. This makes biointensive farming the perfect mode of farming, especially if there is limited space for farming.

This process creates an even more dynamic, thriving and well-balanced gardens, allowing farmers to maximize the relationship between plants, people and insects.

The goal is to create as much biodiversity as possible, at the same time leveraging the unique characteristics of each crop to a farmer’s advantage. Interplanting flowers invite beneficial insects, and planting beans with the corn helps fix nitrogen levels, by replenishing what the heavy-feeding cord removes.

Companion planting also shades the soil, aids in pest control, provide a habitat for beneficial insects, increase crop productivity, and assists in pollination as well as maximizing the use of space.

These are seeds that can be naturally pollinated, by insects or wind. They are different from hybrid seeds, which result from intentionally crossing two different plant varieties, done manually by humans, where each pass on characteristics to the next generation.

Seeds from open-pollinated crops have fixed traits, unlike hybrid seeds, and are true to their parent, allowing the farmer or gardener to select only the best and most vigorous crops. Over time, the farmer will end up with crops that have adjusted to the local environment.

Saving and growing open-pollinated seeds saves money as they grow true-to-type. It also jeeps the genetic plant pool more diverse and diseases and pests are less likely to wipe out the entire crops.

Biointensive farming strives to build and enrich the soil, then other aspects such as crop productivity and income come later, and not the other way around. In other words, the whole system honors the web of life in the garden and uses all the principles to increase the yields, at the same time sustaining the soil.

Therefore, this means that manipulating the system will deconstruct it into parts, making things problematic. When a whole functioning system or entity is manipulated, its impacts are on the nations’ or so many people’s food security.

The meaning of this, therefore, is that if you fail to implement the system, there is the risk of seriously destroying the soil and its fertility, and even jeopardizing the entire concept of biointensive farming.

“Crop production and natural resource use”. (n.d.). Food and Agriculture Organisation of the United Nations. Retrieved from http://www.fao.org/3/y4252e/y4252e06.htm

Odle, T. (2016). Taking a Measured Approach to Biointensive Growing. Gardening in a Drought. Retrieved from http://gardeninginadrought.com/2016/02/18/taking-a-measured-approach-to-biointensive-growing/