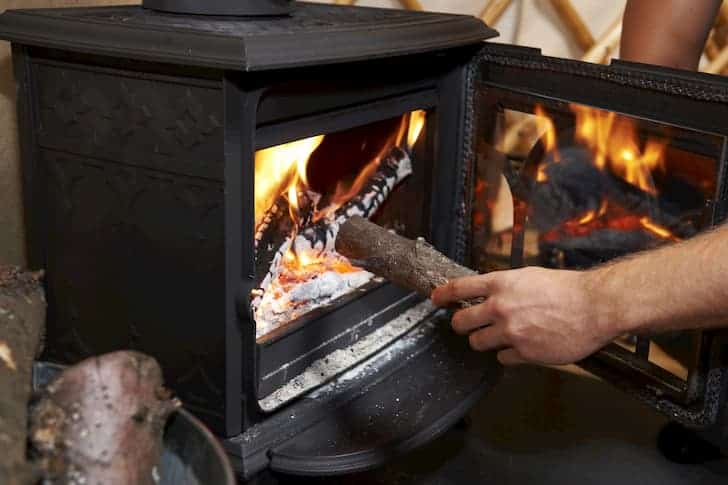 Wood-burning stoves are commonly known as wood burners, log burners or simply wood-burning stoves, and are an important addition to the home. The appliance is used to heat and warm the home through the burning of wood or wood-derived biomass, such as sawdust bricks. They produce more heat for the home than an open wood-burning fireplace as they are designed to burn wood more efficiently. However, how do these appliances fair vis-à-vis the environment? Here are some of the details.

Are Wood-burning Stoves Really Bad for the Environment?

The answer is both yes and no. The question of whether wood burners are bad for the environment does not necessarily have a straightforward answer. However, there are some things you can do to make it better.

On the one hand, wood stoves are virtually carbon neutral. Wood is a carbon-neutral energy source and although it may seem counter-intuitive, the logic is pretty simple. Throughout the life-cycle of a tree, it absorbs a significant amount of carbon dioxide, and when the wood is burned the absorbed carbon is released back into the atmosphere.

This amount of absorbed carbon dioxide during the lifetime of the tree is balanced by the overall amount of the gas released when the wood is burned. Therefore, the carbon dioxide actually added to the atmosphere is effectively zero. Some governments even offer subsidies for some domestic wood burners. In addition, burning wood offers a low-carbon alternative to heating the home using fossil fuels.

Wood-burning in London, for instance, accounted for up to 31% of the city’s particulate pollution a few years back, an increase of 10%.

The particulate matter contributes to climate change and can also cause breathing problems or even cancer in humans. In fact, specs of soot 100 times smaller than the diameter of a human hair are some of the most harmful kinds of air pollution, and once they enter the body through the lungs, they could exacerbate heart and respiratory conditions and is potentially very dangerous. Wood-burning stoves are therefore not the greenest choice, especially in urban settings.

Well, the answer is sometimes. The major issue on the eco-friendliness of wood-burning stoves is that it is not a clear-cut topic! To have a clearer answer, you have to weigh between the carbon neutrality of burning wood versus their emissions. Whether wood-burning stoves are eco-friendly or not depends largely on which one you choose, where and how you use them.

1. If you are in an urban location

Wood stoves would not be eco-friendly in an urban location. You would be forced to buy or import wood for the same and also, the appliance will release carbon dioxide that will be absorbed by not enough trees, denying it its carbon-neutral status. The ideal location for installing a wood stove, which will ensure it is eco-friendly is the rural areas or countryside.

2. The size of your room

You should install an efficient model that carefully matches the dimensions of the room. A smaller wood stove and will underperform; and a big one will produce excess heat, making it bad for the environment. A stove that is proportional to the size of the room, is properly effective and will be environmentally-friendly.

3. How long you run them

Wood stoves should not be running all night and day, even if they are in the most rural of places. Remember, continued use lowers the effectiveness of the entire appliance and could bring about carbon monoxide leaks if not properly managed. The eco-friendliness of a wood stove is the fact that it provides heat without damaging the environment.

Overusing it will provide excess heat and more emissions than the environment can handle. They should be used to temporarily warm the home and if the place is warm enough, it should be switched off or not turned on.

4. If it is well maintained

A well-maintained wood stove is eco-friendly and will perform as it should. If it is not maintained, for instance, if the ash is not removed or if the chimney is not cleaned, you run the risk of having the wood not burning, the chimney releasing smoke inside the house or the release of soot that is dangerous to human health and the environment in general.

Yes, wood stoves are efficient and burning wood is almost carbon neutral. A good quality stove is about 80% efficient with others putting the higher heating value (HHV) at 83%. This translates that 80% of the heat being produced from the stove, is used to heat the room. The remaining 20% is mostly lost by heat rising up the chimney.

A wood stove is vastly efficient, seeing that an open fire has an efficiency rate of around 32% and a room open gas effect fire has in the region of a 55% efficiency. A wood-burning stove is, therefore, an excellent choice for heating a home, whether it is just for heating a home’s air, or better still, if you wish to use it for heating the air and water.

Do Wood Stoves Pollute the Air?

On the flip side, the appliance still emits carbon dioxide into the air. Carbon dioxide is a greenhouse gas and is majorly responsible for contributing to global warming and climate change. Wood burning stoves also produce extra doses of particles into the air. In fact, a wood-burning stove emits more particles per hour than a modern diesel lorry.

In addition, under some conditions, wood-burning stoves can contribute to indoor concentrations of carbon monoxide, nitric oxide, nitrogen dioxide, and suspended particles, including benzo-A-pyrene. These are all dangerous elements to human health as well as the environment.

They are not, but depending on several factors, they could be. On one hand, they provide warmth for the home and are incredibly valuable during those cold nights. Secondly, they are carbon neutral and do not release any extra carbon dioxide into the environment.

On the other hand, they produce smoke and fumes that can result in coughing and shortness of breath within a few hours and even minutes of exposure to the fumes. Recurrent exposure can exacerbate many illnesses such as emphysema and heart failure. The American Lung Association adds that wood-burning stoves produce harmful toxins that can damage your lungs and increase the risk of cancer, heart disease, and premature death. As such, one should limit their exposure to these stoves, their fumes and always adhere to safety precautions whenever they are being used

Tips for Improving Your Environmental Footprint with A Wood Burner

1. Only open the door to refuel

As soon as you open your stove door while a fire is burning, the gust of air that follows affects the burning of the logs, leading to a higher rate of pollution. To avoid this, make sure you only open the wood burner’s door, only when you are refueling. If you are not, leave it closed and let it do its magic

Overfilling the log burner with logs limits the supply and circulation of air in the burner, meaning your fuel will not burn as efficiently. To avoid wasting energy or not attaining the desired results, feed the burner with fuel enough to burn well, and refill only when needed

3. Get the proper wood

Always use properly dried and seasoned wood for your appliance. If you do not have it, get some from your local supplier. Not every old piece of wood is safe for the environment as burning some could mean releasing more toxins into the environment than needed. At the same time, get the properly dried wood, to avoid the emission of too much carbon monoxide as well as smoke.

The smoke and moisture, create a build-up of creosote in your flue, clogging your flue and could quickly turn into a fire hazard if not properly maintained. Seasoned wood is wood that has been cut and dried under cover for at least 6-12 months, and registers less than 20% moisture with a meter.

Make sure the stove is always clean. A dirty stove is a polluting stove and could do more harm to the environment than needed. Also, make sure the chimney is properly insulated or install a chimney liner, which can help improve the draw of the chimney, aid efficiency and help you stay protected against dangerous carbon monoxide leaks.

A well-maintained wood-burning system will produce the desired results and release as minimal negative effects as possible. Also, be sure to install smoke and carbon monoxide alarms and have them properly maintained, so that you are notified immediately in case of smoke or carbon monoxide leak. Finally, be sure to have your system inspected by a certified inspector after cleaning the fireplace and chimney, which should be at least once per year.

5. Dispose of your burnt logs and clear the ash from the fireplace

Disposing of your burnt logs outside is important as the ashes can emit carbon monoxide, which is very dangerous. Therefore, be sure to remove them from your home as soon as possible, and dispose of them properly. Cleaning the ash from the fireplace whenever it reaches the bottom of the grate helps a lot as if left uncleared, the ash will impede airflow, hampering the overall performance of the wood burner.

6. Burn hardwoods, and not softwoods

Hardwoods like oak, ash and maple are denser and heavier than lighter softwoods like pine, poplar and cedar. As such, the hardwood delivers more heat for the home than softwoods.

7. Install them in the countryside areas

As already determined, wood stove burners are not ideal for an urban setting. This is because burning wood releases the carbon dioxide the tree used up when growing, making the appliance carbon neutral. However, urban settings are not characterized by their abundance of trees to absorb the released carbon dioxide.

In the countryside, however, the released carbon dioxide will be absorbed by other trees, making the process safe for the environment. Additionally, the emissions from wood burning boiler stoves are cleaner than oil or gas-burning boilers in the countryside areas. Another reason for advocating for wood stoves in rural areas is because of the availability of wood to use in the burners. In an urban setting, you will have to buy or import such wood from elsewhere.