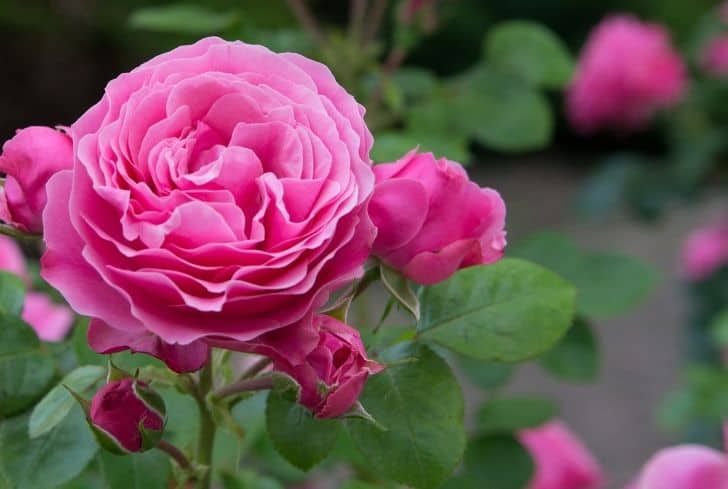 When discussing flowering plants, we often stumble upon two primary categories namely the monocots and dicots. While both come with their specific sets of pros and cons, about 75% of flowering plants are deemed dicots, whereas only a mere 22% are categorized as monocots.

So, when it comes to roses, how do you categorize them? Are they monocots or dicots? Well, roses happen to be dicots, because like every other dicotyledonous plant, it comes with a pair of cotyledons. They also come with several other traits that help distinguish them as dicots. One of them is their leaves. As with several other dicots, you will find that roses often have a net of veins on their leaves.

In this article, we will discuss more on monocots and dicots and learn more about the features that characterize roses as dicots.

What are Monocots vs Dicots?

Even before we understand why rises are considered dicots, it is important to understand the differences between monocots and dicots.

While we already know that monocots have one cotyledon as opposed to dicots that come with a pair of cotyledons, there’s more to it. In this section, we will share some key ideas that will help you differentiate monocots and dicots better.

Like roses, certain plants come with leaf veins extending to multiple branches. If you notice this trait in the leaves of your flowering plant, it is certainly a dicot. During the identification stage, you might need to figure out if the leaves have a pinnate or a palmate arrangement.

In the case of pinnate arrangements, you will find the central vein of the leaf, branching out to tinier veins on both sides of the plant leaf. Thanks to the arrangement, the leaf almost assumes the shape of a feather.

Again, if the leaf follows a palmate arrangement pattern, it will resemble a palm leaf. This is most prominent in dicots, where multiple veins emerge from a single primary vein.

You will also notice that, unlike dicots, the leaves of monocot plants often have a set of veins that are arranged like grass. They often stand parallel to each other and resemble grass leaves. Others appear like arrowheads and come with dedicated sections, dangling in a lower direction.

This is yet another way to determine whether your plant is a monocot or a dicot. All you need to do is count the number of petals. Monocot flowers usually have petals that follow the multiple of three. However, dicot flowers have several petals that often come in a multiple of four-five.

If you really want to find out if your plant is a monocot or a dicot, you might need to do some digging. Start by digging the roots to check the root system. Usually, you will find taproots in dicots and web-patterned roots in monocots.

In dicots, you will find only one solid root that heads downwards under the stem. Several smaller roots branch out from this primary root. Monocots, on the other hand, aren’t deep-rooted. Their roots have fibers and an arrangement of networks that you will understand at the first instance.

Regardless of the species, the majority of the dicots are woody. While there are exceptions, this is still a determining quality. Monocots, on the other hand, are far from woody because they do not come with a layer of cambium. That is also the reason they do not feature growth rings.

Roses originate from a family called the Rosaceae that features several popular dicots like cherries and apples. Almost every plant belonging to the Rosaceae family is popular as dicots. To add to that, roses have some additional determining qualities that we will discuss further in this section.

One of the biggest highlights of roses is their netted leaves. This is a shared trait of all flowering plants that are dicots.

That is why roses have varying petals starting from ten and going up to a whopping 256. However, unlike any monocot, it would never have three or nine flower petals.

This is yet another way to determine the characteristic element of dicot in a rose. You will find this most evident on the rose stems. Every time you cut a rose, observe the structure of the veins within the stem.

Dicots always have veins organized in a ring pattern and depending on the type, certain stems of roses are also hollow, which again is a defining element of dicots.

Other Examples of Monocots and Dicots

Now that you know that roses are indeed dicots, you are probably wondering which other plants belong to the monocot and dicot variant. In this section, we will take a deeper dive into these examples so that you have a better time identifying these plants.

Some of the common examples of monocots would be:

You might want to check the leaves of these plants to ascertain whether they are indeed monocots. As you probably know at this point, monocot features a set of leaves that run parallel to each other. This is perhaps most evident in tulip veins. Because of this, the majority of monocot plants have leaves resembling a blade.

The next thing you want to check is the vein structure of the monocots. This is best evident in grasses. Simply observe a strand of grass and you will observe the same vein structure that you observed in the leaf of the tulip or Lilly plant.

While dicots tend to have woody stems, such is not the case with monocots. This is primarily because these plants come with vascular bundles that are spread around the stems.

An exception here would be Palm trees that are neither too woody, nor too soft. Yucca plants and some variants of bamboo also happen to be monocots and their structure is uniquely woody.

It is worth noting that you will find these exceptions in only 10% of monocots. Thanks to their unique leaf structure, most monocot plants grow vertically as opposed to a woody pattern. Their roots are also shallower than their dicot counterpart.

As you already know, roses are dicots. But additionally, the following plants are dicots as well:

One of the distinctive features of dicots is their semi or fully wooden stems. Their vein structure is ringed that enables woodiness. That is also the reason why the majority of woody plants tend to be dicots.

As you already know, the petals of dicot flowers can be divided by two, four, and five. The veins on the leaves assume a net-like structure and the stems are defined as a ring. Additionally, every dicot seed will have two leaves as opposed to monocots.

You will also notice that dicots like roses have an extensive taproot system. Additionally, they assume a bushier appearance and grow really tall. If you train the plants well, they may even assume a taller hue. One of the best examples here would be a rose bush that is bushy by still structured.

How Many Cotyledons Does a Rose Have?

As you already know at this point, roses have two cotyledons and that is why they are classified as dicots.

Are Lilies Monocots or Dicots?

Like tulips and other plants, Lilly is a monocot. In case you’re wondering why it is primarily because the plant has a single cotyledon and comes with a leaf system that is extensively arranged in veins.

You might also want to notice the petals of the lilies which are usually nine. In some cases, they may even be six. But as with every other monocot, the petals are in multiples of three.

You also want to notice their root system which is shallower than the extensive taproots of dicots.

Are Roses Complete or Incomplete Flowers?

A complete flower has 4 primary flower parts including:

Because roses have all the required parts, they can be classified as complete flowers.

Now that you have a clear insight into roses and many other similar forms of dicots, plant your favorites in your home garden. Monocots aren’t lagging either and thanks to their shallow roots, they grow really fast. Either way, explore your options and choose a plant that works best for your garden or patio.