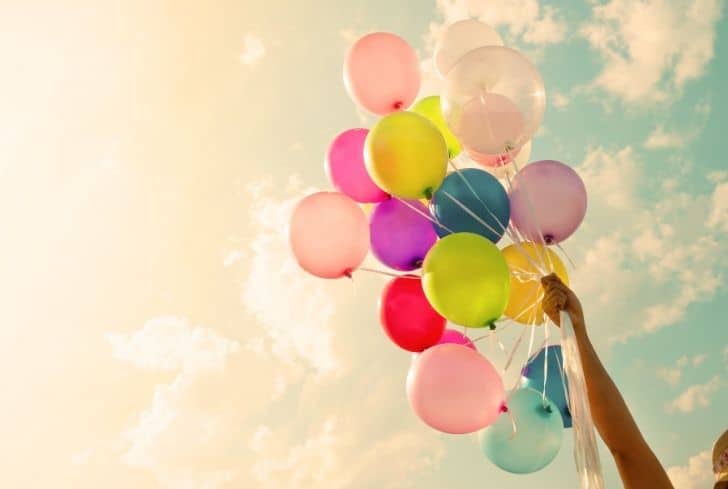 Do balloons break down naturally after use? Balloons are items that parties seldom do without. In other words, you can describe them as the life of the party, especially a kid’s party. Balloons make great party activities, too, so we naturally burn through a significant quantity daily.

But are balloons biodegradable? It has become non-negotiable for consumers to examine their consumption habits for those that are bad and damaging to the environment. Non-biodegradable products fall under this category because nature often has challenges recycling them. This article will discuss whether balloons decompose when exposed to the right conditions, so stick around!

The history of balloons is quite interesting. It dates back to the 18th to 19th century, although the products then were better for the environment. This is because balloons were made from dried animal bladders.

In 1824, Michael Faraday created the first rubber balloons, and environmental pollution problems kicked off. Now, balloons are among the top three pollutants in the world.

Rubber balloons are biodegradable. To clarify, a biodegradable material will break down naturally into humus when exposed to the right conditions. The timing is also important – if it doesn’t decompose within the shortest possible period, it may not count as biodegradable.

A rubber balloon should break down completely within six months to four years. The Federal Trade Commission postulates that if an item like this does not decompose within five years, it isn’t biodegradable and should not be marketed as such.

But again, environmental factors also determine the biodegradability of an item. A rubber balloon will decompose faster in a moist, warm, and aerated environment because microbes like bacteria will work at an increased pace.

In contrast, a rubber balloon may not break down in a waterway or water body. This is because waterways are not as receptive to the microbes needed for biodegradation. The marine habit operates differently, so balloons will not easily break down there.

See also  21 Deadly Plants You Might Have at Home

The problems that occur as a result of an inability to decompose are another story for another day. But the summary is that it does not end well for some parts of biodiversity, like marine animals and terrestrial wildlife.

Yes, latex balloons are biodegradable because the material used to manufacture them is an organic matter. It comes from nature and will be easier for nature to break down. Degradation will take place in less than five years.

Latex balloons are the most popular types out there. They are available in every shape and color, and kid parties are especially fond of them. Yearly, millions of balloons are used in the United States, from outdoor releases to carnivals and festivities.

The environment is the immediate recipient of the aftereffects of outdoor releases, so they must be biodegradable at the very least. However, biodegradability may not be assured, at least not at the required rate. This depends on the environment latex balloons find themselves.

If one doesn’t burst before reaching a water body, it may float around for a while. Suppose a fish or other sea creature encounters and mistakes it for food. In that case, it will not necessarily poison them because the material is organic but may cause intestinal obstruction, resulting in death.

Suffice it to say that the biodegradability of balloons does not make it okay to make a habit of releasing them or using them in a manner that is likely to harm the environment.

Yes, water balloons are biodegradable because they are also made from latex. Latex is one of the most popular materials for manufacturing balloons. Although it does not break down as fast as optimally possible for the environment, it biodegrades in less than five years when exposed to the right environment.

However, this could also mean that a significant amount of rubber enters the ecosystem frequently. As you know, water balloons are single-use items. One plop at the wrong person or surface, and it goes kaboom!

You will be unable to refill and reuse it, which means the immediate result goes to the environment. Fortunately, they are made from organic matter and do not contain any synthetic additive that could render the waste products harmful to the environment.

In less than five years, water balloons left in a moist, aerated, and bacteria conducive environment will have broken down to humus. However, it must be made from rubber for this condition to be met.

Yes, rubber balloons are compostable. But they must be made from latex or rubber because other manufacturing options are unsuitable for the environment. Instead of mylar and foil balloons, investing in rubber or latex options is better for the environment. If you have done that, you can consider composting your balloon waste.

Compostable materials must comprise entirely of organic matter, or they will not decompose. The science behind composting waste is that bacteria, fungi, and other microbes in the soil can break them down within the shortest possible time.

However, synthetic or manmade materials are often reinforced and unattractive to these microorganisms. In addition, they will not supply nutrients to the soil and plants, so there is no point.

Before a material qualifies as compostable, it must be biodegradable or capable of breaking down to humus. Plastic balloons will not decompose – they will leave remnants of plastics behind.

Composting should be a conscious activity because inorganic materials will never break down. Therefore, before proceeding, you must confirm the type of balloons you desire to compost.

But you must also know that compared with the other organic waste items (like scraps from the kitchen) in the compost pile, balloons will decompose at a slower rate.

Are There Biodegradable Balloons?

In the market today, there are many balloon manufacturers. And because of the desire to move to a more sustainable method of living, manufacturing choices are changing.

Rubber and latex are fast replacing mylar and foil balloons. This is a more biodegradable option that is also better for the environment.

For many reasons, balloons are generally not good for the ecosystem, but biodegradable options are the lesser of two evils. These latex and rubber balloons will break down within five years, as they have been engineered to do if they must qualify as biodegradable.

However, not every balloon labeled “biodegradable” actually breaks down. You may also be unable to tell the difference between a biodegradable balloon and one that isn’t.

Don’t put balloons in the compost pile unless you are certain of the biodegradability condition.

Yes, biodegradable balloons are really biodegradable. So long they are breaking down into humus, they qualify as organic waste. Although the number of months to years that biodegradation occurs is also important, it will eventually happen with a rubber or latex balloon, even though it is not within the stipulated five years.

The biodegradation rate relies on several factors, including how moist the environment is, the weather factors, and the presence of microorganisms. Heat also plays a role, so put biodegradable balloons inside your compost pile if you want a faster breakdown.

Biodegradable balloons are really biodegradable. However, the manufacturers must be true to their claims and must have stuck with purely organic ingredients.

When there are synthetic additives like plastics and metal, it becomes inorganic and incapable of biodegradation.

Are Biodegradable Balloons Good for the Environment?

Yes, biodegradable balloons are good for the environment. They are better than conventional options like nylons and foil. Mylar balloons will not break down, either.

Balloons are not the best items for the environment. They are single-use and contain gases that may harm nature and biodiversity. However, there is a lesser of two evils – biodegradable balloons.

Biodegradable balloons are products made purely from organic materials. Latex or rubber are the most popular options in the market. They come from a specie of trees, which means they are renewable and will break down naturally.

Furthermore, they will decompose fully. Compare this state with the leftover from degrading plastic or nylon balloons, and there is no doubt that the environment is in better hands with biodegradable balloons.

Are balloons biodegradable? If you have asked that question, you are likely a sustainable consumer. You have your answer – there are biodegradable options, but you must be conscious about seeking them out and confirming their organic nature.